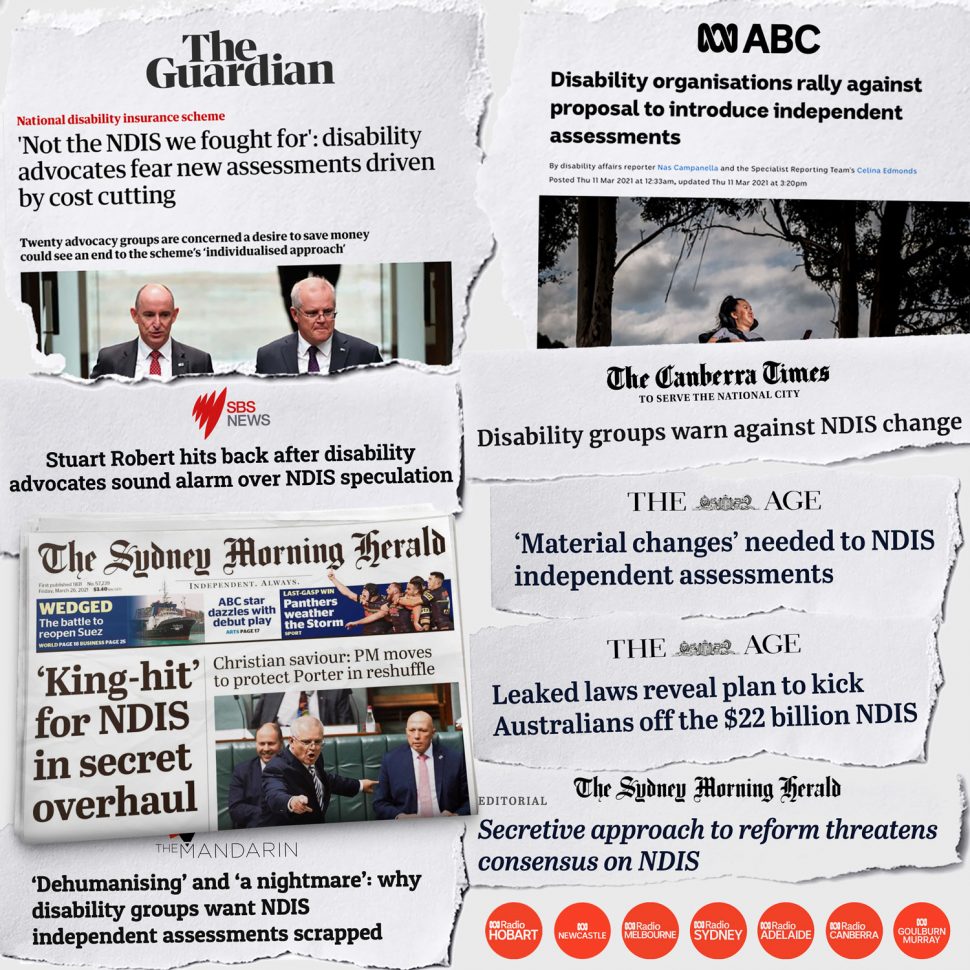 Your concerns about changes to the NDIS are being heard. On March 11 the disability sector released a joint statement of concern. Since then the media about our community’s concerns hasn’t stopped. It has been hard to keep track of – so we are putting all the links together here to help make it easier.

The Guardian
‘Not the NDIS we fought for’: disability advocates fear new assessments driven by cost cutting

The Examiner
‘A bit scared’: mooted NDIS reforms a source of angst in Tasmania

Eureka Street
The fight for the future of the NDIS

The Saturday Paper
The NDIS and government controls

2ser
Are Independent Assessments a step backwards for NDIS?

ABC News
As the NDIS moves to independent assessments, these companies stand to profit from the change
VIDEO: Agency running NDIS defends potential conflicts of interests among contractors

ABC The Signal
AUDIO: Is the NDIS changing for the better?

Reasonable & Necessary – Making sense of the NDIS podcast
What is the government planning to do to the NDIS?

Crikey
No ‘independent’ reviews, of any kind

The Canberra Times
Pressure on minister to stop NDIS changes

The Australian
‘Secret’ plan to pare back NDIS

Crikey
Linda Reynolds set to be pushed over ‘glass cliff’ for man-made NDIS shitstorm
AusPostScare and NDIScare — harbingers of an election campaign to come?

The Australian
NDIS revamp put on the back-burner

The Australian
NDIS reform on hold for months

The Canberra Times
Disability ministers to meet again in July

The Guardian
AUDIO: Why is the Coalition changing the NDIS?

Take action – have your say

1. Email the Minister for the NDIS

2. Share your concerns with all of our MPs and Senators

5. Have your organisation endorse the joint sector statement

6. Send in your Hands off the NDIS photo

Have we missed something? Email with the link to the story using the subject line “Media”. Thank you!