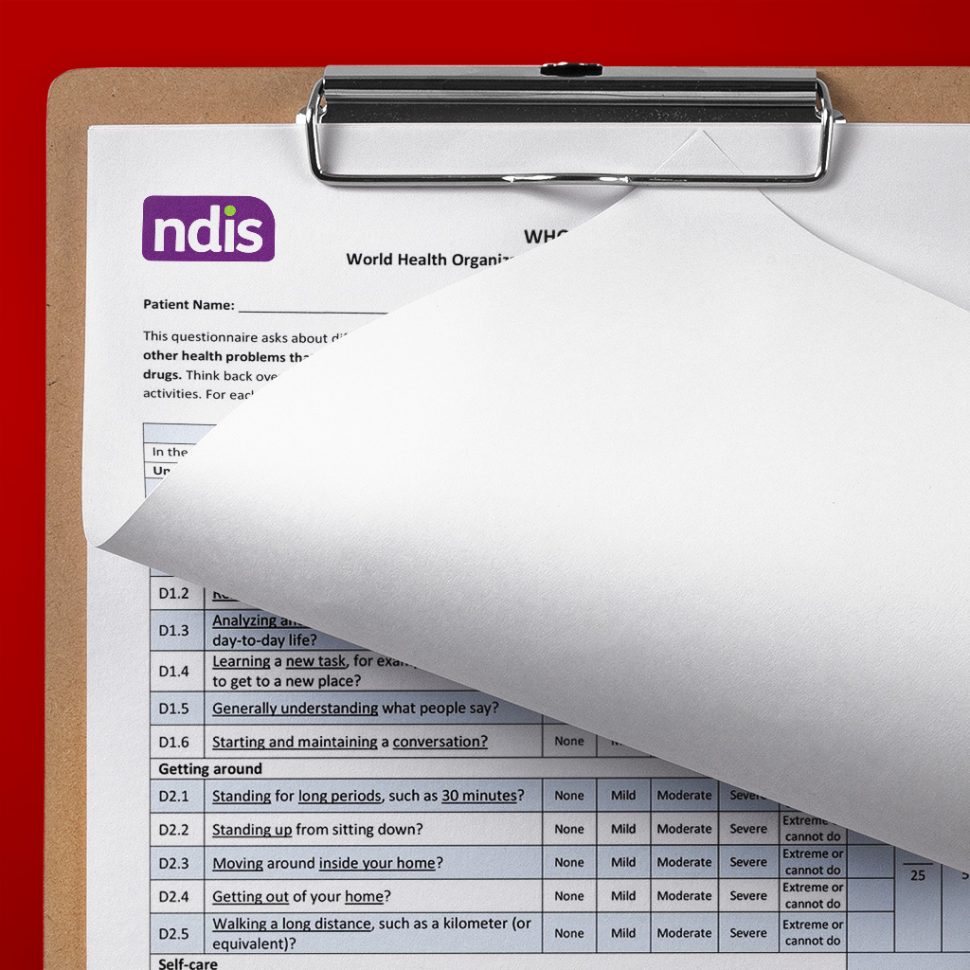 Just over a week ago the Minister for the NDIS Stuart Robert announced the government’s response to the Tune review.

It was a good news/bad news kind of a thing.

So far so good. But buried at the bottom of the announcement was actually something that was a much bigger deal than better fact sheets and more accessible legislation. And that big deal was the introduction of independent assessments.

So what was announced?

The Minister announced independent assessments would be introduced for everyone applying for the NDIS from February 2021.

And then from July 2021 existing participants would be required to have an assessment for reviews at critical life points – like leaving school or moving out of home.

And then gradually every single participant will need to have one of these assessments when they have a plan review.

The NDIA will fund an organisation to do these assessments. The assessors will be medical or allied health professionals like speech therapists or clinical psychologists.

The assessors will use standardised assessment tools. And they won’t be just any old tool lying around – they will have to be the ones that the NDIA have chosen. The NDIA say they have chosen about 60 tools for their toolkit (but they haven’t said which ones yet).

These assessments will take somewhere between 1 and 4 hours (on average). And that time should include writing a report. In some cases, face-to-face time with the assessor might be as little as 20 minutes.

How do we know all this?

Well not because the NDIA told us.

But because a little earlier this year the NDIA went out to tender to look for an organisation – or organisations – to do this work.

So while the Minister only just made the announcement, work has been going on in the background for a long time.

The tender document sets out what the NDIA expects the organisation to do and how they expect assessors to carry out their work.

That’s a LOT of tests.

Why are Independent Assessments being introduced to the NDIS?

Well that is the $24 billion question.

The government and the NDIA have said two things.

Singing to the same Tune?

Let’s tackle the first one. What exactly did Mr Tune recommend?

In recommendation 7 he said:

The NDIS Act is amended to:

a) allow evidence provided to the NDIA about a prospective participant or participant to be used for multiple purposes under the NDIS Act, including access, planning and plan review processes

b) provide discretionary powers for the NDIA to require a prospective participant to undergo an assessment for the purposes of decision-making under the NDIS Act, using NDIA-approved providers in a form set by the NDIA.

What that mouthful means is that people applying to the scheme should be able to get an assessment done by an assessor chosen and funded by the NDIS. That evidence will not just be used to help determine eligibility – it could then be used to help the planning process and help build the plan.

Mr Tune focussed mostly on people applying for the scheme.

So NOT what the government just announced.

Importantly Mr Tune also said that people with disability and their families would rightly be worried about this approach. So there would need to be a lot of consultation before it was introduced to make sure people felt confident about how it would work and what it would mean for them.

“This change in approach will require consultation with participants, the disability sector, service providers and the NDIA workforce”

We pretty sure he meant BEFORE the change was introduced.

Has there been consultation? Very short answer. No.

And to make matters worse, the results of the single small trial of this approach have never been released. Despite many requests.

There was going to be a bigger trial this year. But it was cancelled due to COVID19. In the last couple of days, the NDIA have announced they are restarting this trial but there is no detail about that yet.

So we have leapt straight from a small trial to full national roll out. 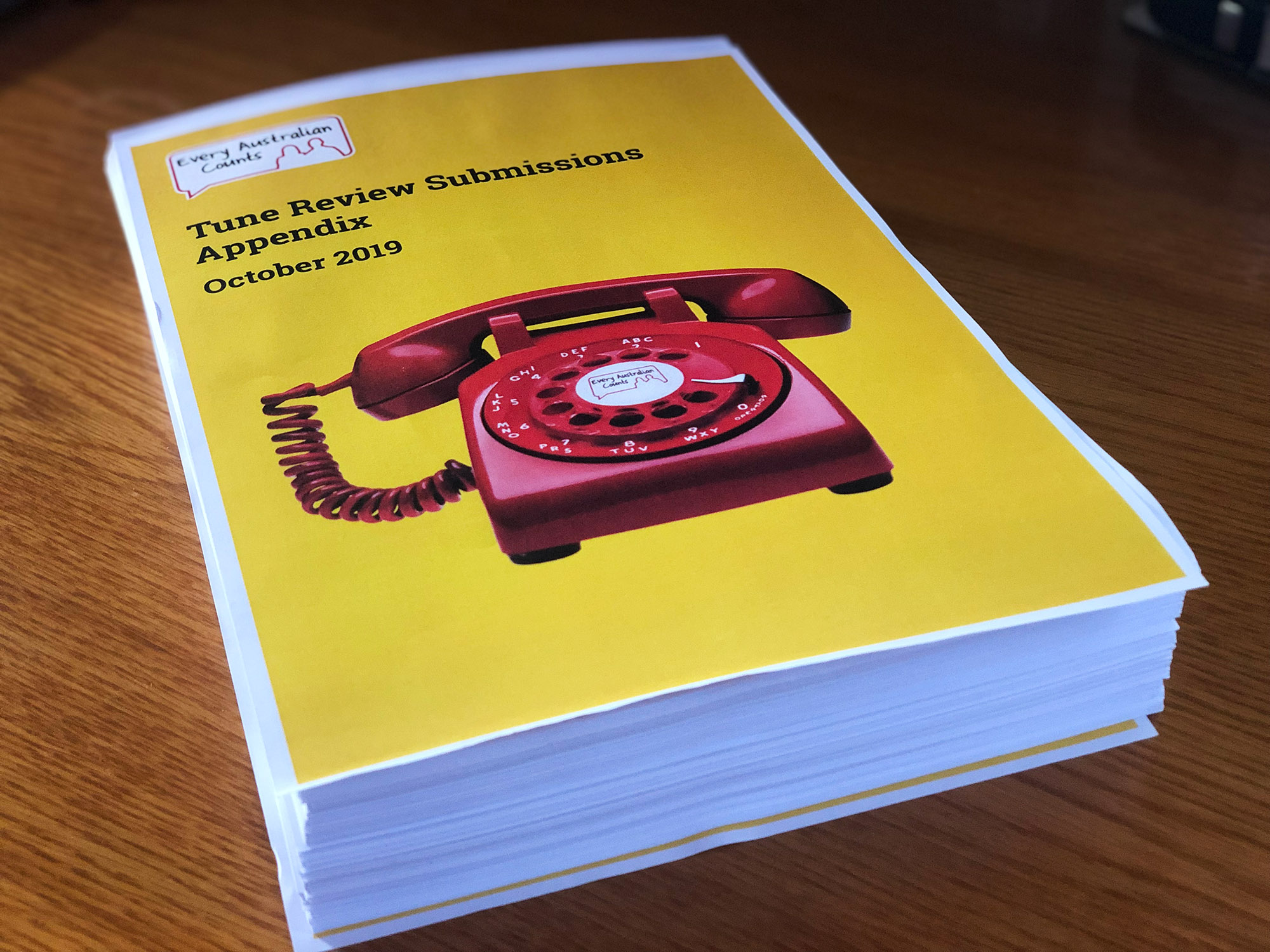 Well what about fairness and consistency?

On this one we are in furious agreement. The current approach to applying for the scheme is not fair or consistent. You either have to pay a lot of money for expensive reports or wait a really long time on public waiting lists to get an assessment done.

Planning isn’t really fair or consistent either. Sometimes there can be a lot of difference in both the amount and kind of support people get.

Is this really the best way to go about making things more fair and consistent?

Were other approaches considered?

These are two key questions that have not been answered.

Since this was announced we have heard from lots of people. People are worried about what this will mean for them personally – but also what it means for the scheme in general.

People are worried that these new assessments will do nothing but add yet another layer of stress and hoop jumping in a scheme that is already full of meaningless red tape.

In short – how can someone who does not know you or your life capture your full circumstances in such a short space of time?

And how will this feed into the planning process?

We also ALL need to know this is not a sneaky way to limit access to the scheme and save the government money.

So we think it’s time the Minister answered some of these very basic questions before anything goes any further.

Based on what we have heard over the last week we have come up with six questions that we think deserve an answer:

1. Will the assessments paid for by the NDIS be the only thing that determines eligibility for the NDIS? What if people have other assessments and evidence? How will they be used?

2. Will the assessments paid for the NDIS be the only thing to determine your plan and your funding? How will your individual circumstances be captured? What will happen if you have more than one disability?

3. What consultation did you do with people with disability and their families before deciding to introduce this?

4. Why won’t you release the results of the pilot?

5. Why is this being rushed through? Why have you ignored the recommendations of the Tune Review? Why won’t you pause this process and consult properly with people with disability and their families?

6. How can our community be assured this is not simply a cost cutting exercise to reduce access to the scheme? And reduce support for existing NDIS participants? What guarantee will you give that people will not be worse off?

Because we know everyone has so much on their plate at the moment with COVID19 and lockdowns, we have tried to do the hard work for you.

We have a form on our website where you can email the Minister directly. You can ask him the six questions we have prepared or add some of your own.

But the message we want him to get it is – talk to people with disability and their families before this goes any further. 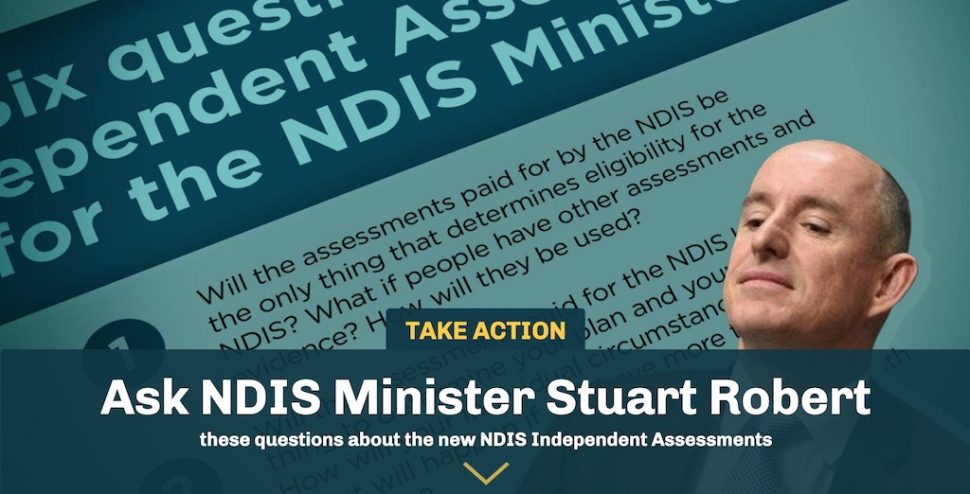 You can find the form to email the Minister on this page.

Check out the Easy Read version

And stay tuned because we will be writing more about independent assessments soon.

EAC submission to the Tune review