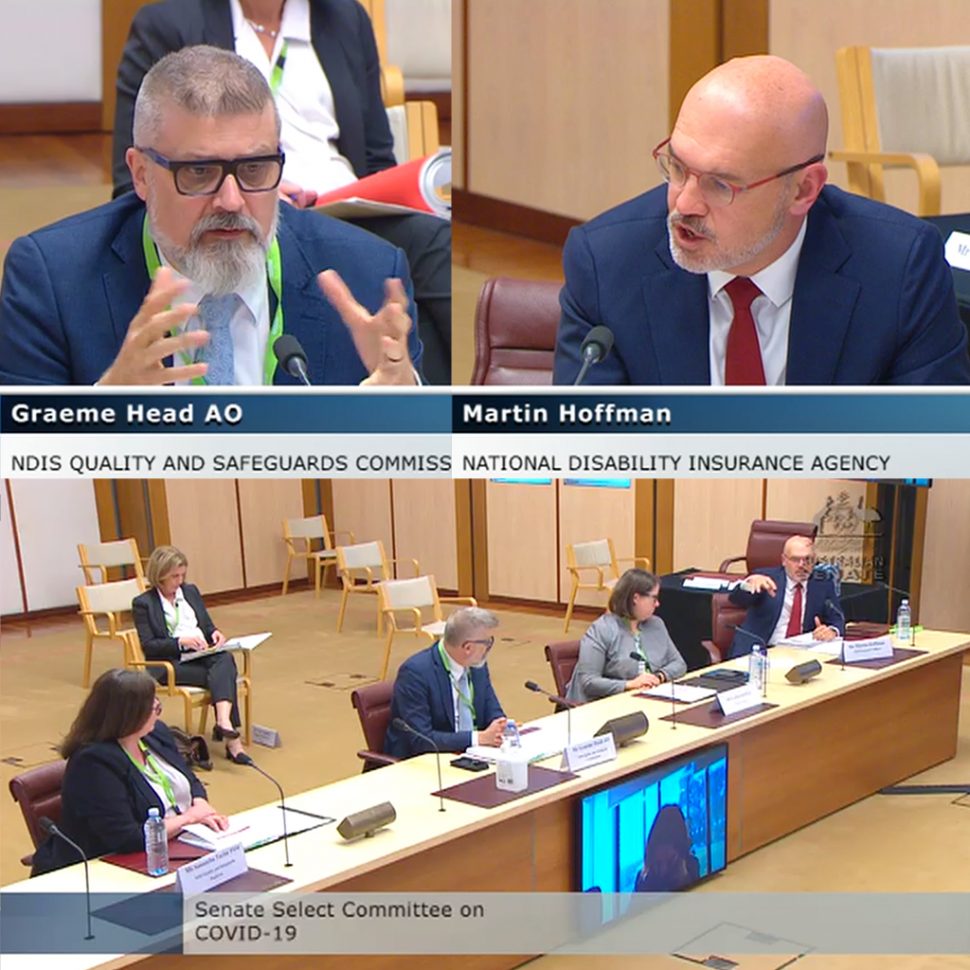 Yesterday the National Disability Insurance Agency, the NDIS Quality and Safeguards Commission and the Department of Social Services all appeared before the Senate inquiry into the government’s management of the COVID19 pandemic.

It would be fair to say that things got pretty testy at times. Which perhaps was not surprising given what had already happened that day.

The Sydney Morning Herald and The Age featured a front page story which revealed that the NDIS Commission had issued only one fine in the two years it has been operating.

And this fine was issued to the appallingly named Integrity Care – the service provider who was supposed to be providing support to Ann Marie Smith.

One fine. And for the most appalling and tragic death in the disability community has seen for some time.

Let that sink in for a while.

Two years.
More than 8000 complaints.
One fine.
What is going to take to get change?#NDISMakeItWorkhttps://t.co/EqeyiFDvxL

So what did else we learn?

The Senators kicked things off by asking the head of the NDIS Quality and Safeguards Commission Graeme Head about that newspaper story.

Mr Head noted that some of the details in the story were not correct – there had been about 5,700 complaints and about 8,000 investigations over the last couple of years.

He did agree that only one “penalty infringement notice” had been issued since the Commission started. But he noted that the Commission had taken “other action” against about 3,000 providers.

Some of these actions included banning providers and banning individual workers. As well as “other” unspecified actions.

But there were no details about how many of those other actions had been taken – or what the outcome was.

The Minister for the NDIS Stuart Robert was pretty unhappy with both the media story and the questions asked by the Senators and decided to take to Twitter to defend the Commission and providers against people who were “bashing them up”.

There are media reports on various interpretations of #NDIS Commission data this morning and quite frankly, the politically expedient bashing up of the independent commission and people who work in the disability sector needs to stop.

No one argues that the Commission is new – and it is the first time we have had a national system like this. In fact it is not even completely national yet – WA does not join until the end of the year.

Everyone understands that these things take time to get going.

But – and it is a big but – it’s a fair question to ask how well things are working if you have had more than 5,000 complaints, more than 8,000 investigations and only one resulted in a fine. And that fine only came in the most horrific and appalling case the disability community has had for some time.

If we want people to have confidence in the system and come forward to complain then they have to feel confident that action will be taken.

When we put the call out to people in the Every Australian Counts community recently to tell us about their experiences with the Commission, many people said they were unhappy with how long it took the Commission to investigate their issues. And that they felt the Commission was still “weighted” towards providers.

And that is just the issue of complaints. The quality of services is another kettle of fish altogether.

Again it is a fair question for people with disability and their families to ask – is this rather expensive new system resulting in better quality services?

What about the NDIA?

We heard that the NDIA made more than 60,000 phone calls to “vulnerable” NDIS participants during the first wave of the pandemic. And a further 7,000 calls to participants in Victoria during the lockdowns.

Senator Jacqui Lambie used her time to ask Mr Hoffman about how many family members had been granted an exemption to be paid to provide support to a family member during the pandemic.

(Family members are only allowed to be paid for providing support to family members in the NDIS in “exceptional circumstances”. This issue came up in our first Zoom forum with the NDIA, and came up again twice in our Q&A with Mr Hoffman – and there is more info about it on the Coronavirus pages on the NDIS website)

Mr Hoffman said he would have to check but he believed only two exemptions had been granted. He could not recall how many requests had been made but agreed it was a “significant” number.

He took the question on notice (which is Senate speak for – we will go away and find out the answer and send it through to you. Which is fine except that by then everyone has forgotten about the question and only nerds like us go looking for the answers later).

Plans for COVID19 and people with disability

Both the Department of Social Services and the NDIS Quality and Safeguards Commission tried to answer the Senator’s questions about how many people with disability had contracted COVID19 since the pandemic began.

The issue of data and reporting has been a thorny one since the pandemic began. The Commission only has data on outbreaks occurring in registered disability services. NDIS participants in aged care are not included in the data. And the states also keep some data.

So there is no one source of data – which of course has made it hard to know exactly how things are tracking.

But the Commission did confirm that eight people with disability had died “while COVID positive” – six in Victoria and two in NSW. And that there were currently 20 active cases around the country – including twelve participants and eight workers.

That is incredibly sad news. To all the family, friends and loved ones of the people with disability who died we offer our sincere condolences.

As for all that planning … the Senators heard much the same story as the Commissioners at the Disability Royal Commission hearings a couple of weeks ago.

The Department of Social Services confirmed they had not been consulted on the government’s initial plan to manage the pandemic. And the plan did not specifically mention people with disability.

A specific plan to address the needs of people with disability was not released until April (which was after advocacy groups released an open letter to the Prime Minister calling for action).

The Department also confirmed that a formal joint response between the Commonwealth and Victorian governments to manage outbreaks in disability services in Victoria was only established in August – well and truly after the second wave had already hit.

And to that they thanked providers for the actions they had taken in response to the virus – noting that outbreaks looked nothing like what had happened in aged care services in Victoria.

But with all this congratulating going on there was one notable silence.

There was no acknowledgement of the sometimes extraordinary actions that people with disability and their families have taken over the last six months to keep themselves safe.

Sometimes with little or no support from anyone else.

We think that was pretty poor form. One of the reasons we think transmission rates have been relatively low is that people with disability have taken lots of steps to protect themselves. And families have also taken sometimes quite extraordinary steps to keep their family member safe.

So while no one else might have noticed, we just wanted to stop and give a BIG should out to everyone out there doing everything they can to keep themselves or their loved one safe.

We see the awesome job you are doing. We know it is not easy. It is in fact incredibly hard. But you are doing it. And we know you will keep doing it.

As for us – we will keep trying to push for the changes you tell us you need.

And in case you need more support, here are some places you can call:

The Disability Royal Commission have set up a free counselling service for people with disability.

It’s open (AEST) 9am to 6pm weekdays, and 9am to 5pm weekends and national public holidays.

Remember this hotline is just for people with disability and their families. It is staffed by the good folks at Ideas Disability Information who are really on top of all things disability.

They can help you with any question you might have. If you are feeling overwhelmed and don’t know where to start they will do all the hard work for you and get you the info and help you need. Just give them a call.

There are special teams of NDIA staff available to answer your questions and help with your plan. Just press 5 after calling the NDIS contact centre. Open Monday to Friday 8am to 8pm (local time).