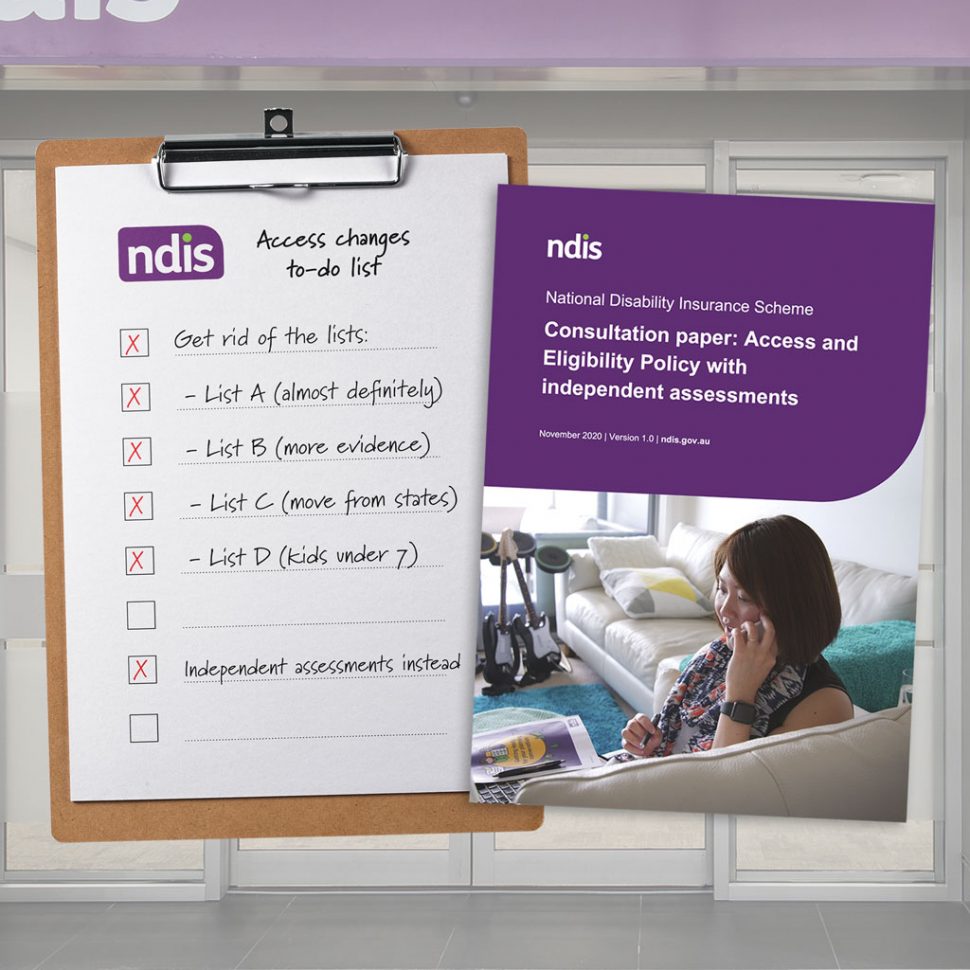 First the good news. Since the NDIS was introduced there have been four lists which have determined the way you apply for the NDIS. They were called (not very creatively) List A, B C and D.

List A contained a list of all the disabilities which were fast tracked straight through. The NDIA never said “automatic” entry to the NDIS but if your disability was on this list you were pretty likely to be granted access and you did not have to provide as much evidence.

List C was about people who were coming across from existing state and territory disability systems. In NDIA language this list was all about what were called “defined programs”. If you were in a defined program, you were shunted across to the NDIS without having to provide much extra evidence – if any at all.

List D was an early intervention stream for kids under seven years of age.

The lists were started with good intentions. They really came into their own in 2016 when the limited trials of the NDIS ended and we started bringing everyone who was eligible into the scheme. They were really designed to quickly bring 400,000 people into the scheme and meet the astonishing targets set by the states and territories. And let’s be clear – those very ambitious targets were set by state and territory governments because they wanted to get people with disability off their books. It’s pretty clear those targets were never ever going to be achievable.

But it is also true that it the arguments about who should be on List A or List B started the second they started to be used by the NDIA. And there were some truly random decisions in there. For example many genetic conditions were included in List A – but Down syndrome and Williams syndrome were relegated to List B. With no explanation why.

And who can forget the great list debacle of 2018 when the NDIA “accidentally” published a new List A, which booted people with a level 2 autism diagnosis off and onto List B? And then denied they were even considering it?

And the NDIA have also made it pretty clear that they have always regarded some of the state and territory defined programs as pretty suspect.

In fact they have been very quietly “reassessing” people for some time now – and hoping like hell we all would not notice.

So there will be lots of people who will be glad to see the end of the dreaded lists.

But the question is – will this new process be fairer?

So what are the lists being replaced with?

In the future everyone will apply for the NDIS in the same way. 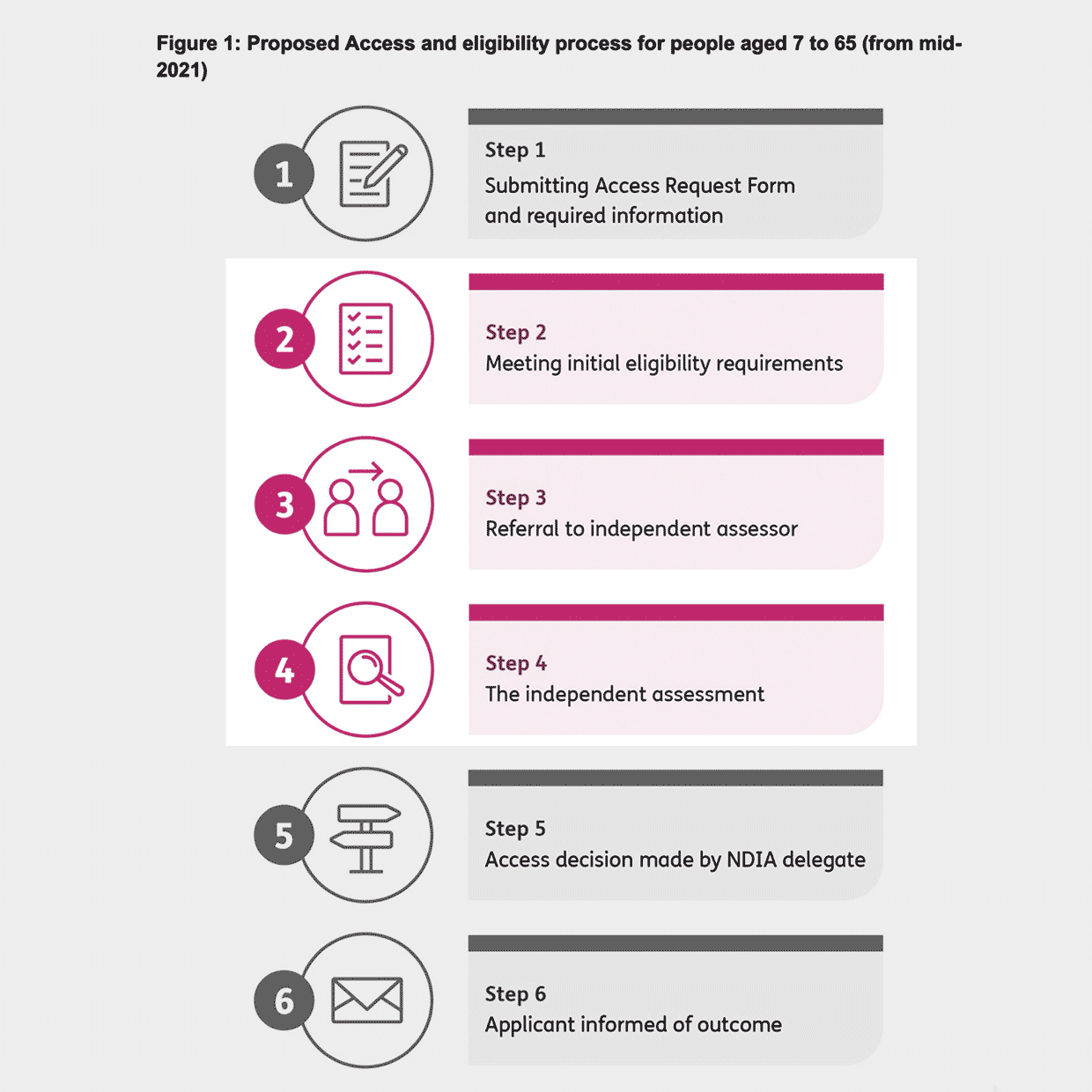 It is true that people are currently spending gobsmacking amounts of money on reports and evidence to try and access the NDIS. And if they can’t pay out of their own pocket for reports, they are spending a long time on public waiting lists to see health professionals who can carry out the assessments and write reports.

And despite all the waiting and all the money it’s also clear these reports don’t always hit the mark – and then people have to go through it all over again. So much stress and such a waste of money.

The NDIA are claiming that people with disability are spending somewhere between $130 million and $170 million on reports trying to access the NDIS.

But there is absolutely no information about how they arrived at this figure.

All that evidence will still have to be submitted with your Access Request Form. These new assessments won’t change that.

And people will also obviously continue to see doctors and specialists in order to get a diagnosis which they may need for lots of reasons other than trying to access the NDIS. So no money saved there.

And finally the NDIA themselves concede that “sometimes” they will need additional evidence to make their decision – which you will then have to go and get and pay for (you can read more about that on page 21 of the NDIA’s consultation report).

So the claim that these new compulsory assessments will suddenly save people with disability $130 million seems well … well let’s just say it’s a bit of a stretch.

There was also some very worrying commentary about what other evidence health professionals will be required to provide.

Check out the bottom of page 13:

“Health professionals will be required to provide information about what interventions or supports have been considered and, where applicable, all reasonable supports and treatments have been identified or administered.”

We gotta say … this goes WAAAYYYY beyond the scope of the NDIA CEO to decide who is and is not eligible for the NDIS.

What happens if you don’t agree with the assessment?

First things first. You won’t even get to see a copy of the assessment unless you ask for it. You will only be given a summary.

If you don’t agree with what is in the assessment report you won’t be able to challenge it.

That’s because technically the assessment report is not a “decision” – and only decisions can be reviewed in the NDIS.

If the NDIA decides you are not eligible for the scheme you will still be able to challenge that decision by asking for a review – just like you do now.

And if you are found eligible, the assessment report will then be used to determine your NDIS plan and budget.

So if the assessment report is not an accurate picture of you and your needs beware – it will be used to determine the funding you receive in your plan.

So again this is one of the things people are really worried about – if the assessment does not capture you or your needs accurately it is going to be very difficult to undo.

There is also lots of talk in the consultation paper about how the assessment will capture the impact of your environment.

But … they are only assessing you in one environment. Usually your home. And for most people it’s your most comfortable environment. And the one that is usually set up best to meet your needs.

So you are probably at your most “functional’ when you are at home.

But, as we all know, it can be a very different story when you are outside your home. And when support becomes even more important.

So unless the assessor is planning to follow you around to every environment you find yourself in – home, work, sport, community, public transport, school, friend’s houses, movie theatres, bowling alleys, the list is endless – then these very clearly are not the “holistic” assessments the NDIA keep insisting they are.

Will everyone have to go through these assessments?

The short answer is yes. The vast majority of people applying for the scheme will have to have one of these assessments.

Exemptions will only be granted in two circumstances:

But again – the decision to give or not to give an exemption is NOT a reviewable decision.

That means you can’t challenge it. So if the NDIA CEO says no you can’t have an exemption, then you will have no ability to appeal. You must do the assessment – or risk being left without support.

Talk about being stuck between a rock and a hard place.

There is some good news in the consultation paper.

One of the reasons that people find applying for the scheme so difficult is that there is no guidance for people with disability, their families or their treating health professionals about what the NDIA are looking for.

There is no guidance on what evidence is required. What reports should include. Other than some vague reference to describing the impact of your disability on your daily life.

So what the NDIA have committed to doing is making it much clearer about what they are looking for in that evidence. And who they regard as qualified to provide it.

Hopefully that will mean that people will spend less time and money chasing reports that don’t make the cut with the NDIA – and more time focused on what is regarded as really important.

In fact this is one of the areas that the NDIA are asking for specific feedback about. So if you have good ideas about what the NDIA should do to make its guidelines and requirements clearer now would be a good time to send them through to NDIA.  This has been a problem since the scheme started so it would be good to have a say about how it should change.

So speaking of giving feedback …

Now is the time to have your say.

But the paper also says they would “welcome any feedback on the policy as outlined in this paper” (p25).

So again, the door is open folks. We don’t think you should be restricted by the questions or hold back in any way. Feel free to share any and all of your feedback about this new assessment process – and what you think should change.

You can do it one of two ways. You can give your feedback directly on the NDIS website. You can make a written submission or upload a video or audio file.

Or you can tell us. We have opened a page on our website where you can give us your feedback. And we will bundle it all up and share it with the NDIA.

But whichever way you chose – don’t delay. NOW is the time to speak out.

If you are worried about what these changes will mean for you (or your family member) there is no time to waste – you need to speak out now.

You can find copies of the papers on the NDIS website:

We have a number of articles which explain the thinking about these new assessments:

And we have a form you can use to tell the NDIA and our MPs why these changes won’t work for you.