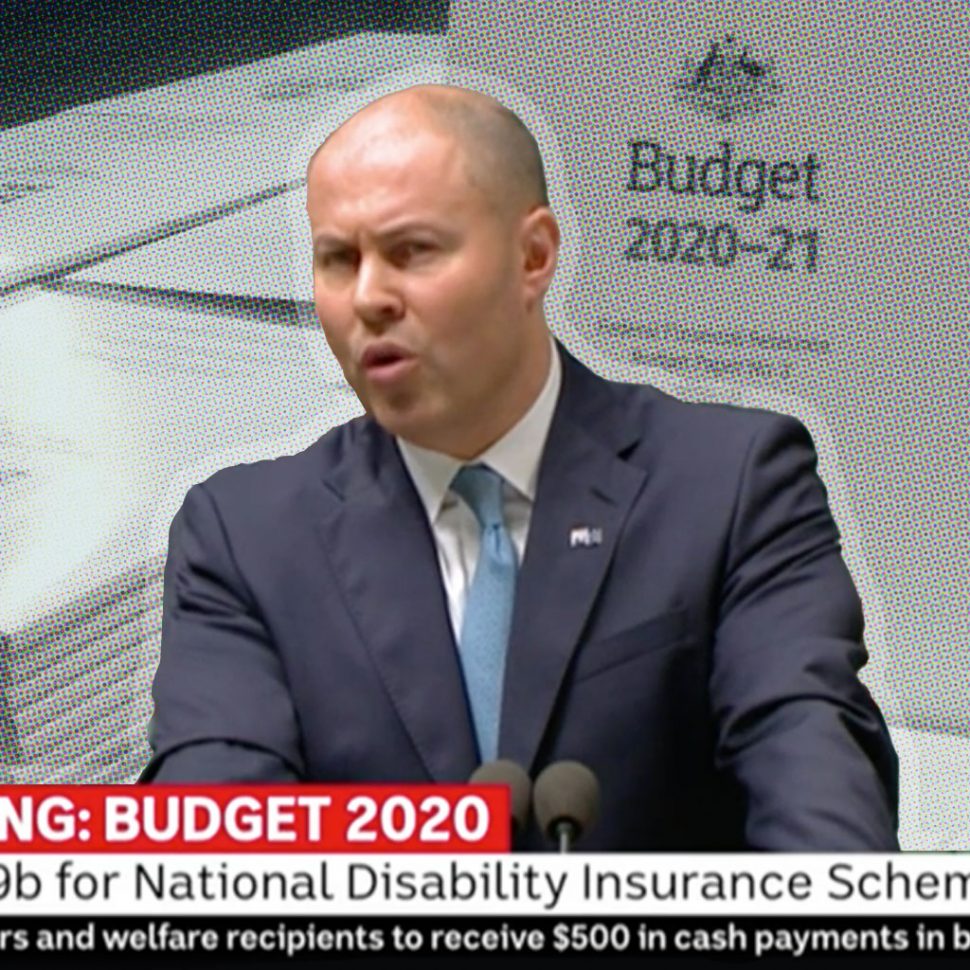 In the middle of a global pandemic and with the country facing the worst economic crisis in more than a generation, the NDIS was never going to be a headline feature of this year’s Federal Budget.

But regardless the NDIS did rate a quick mention in the Treasurer’s speech – and more importantly it did receive some more funding.

And there were a few other announcements – as well as some notable absences.

Let’s have a quick look.

More funding for the NDIS

The Minister’s media release announced the government would provide $3.9 billion more for the NDIS.

Some people were a bit sceptical about the announcement. Particularly given what has happened in previous years.

But this doesn’t appear to be funny business with the numbers – it appears to be a genuine increase in funding. It is spread across what is called the “forward estimates”. Forward estimates are the government’s best guess about what they think they will spend in the next few years. 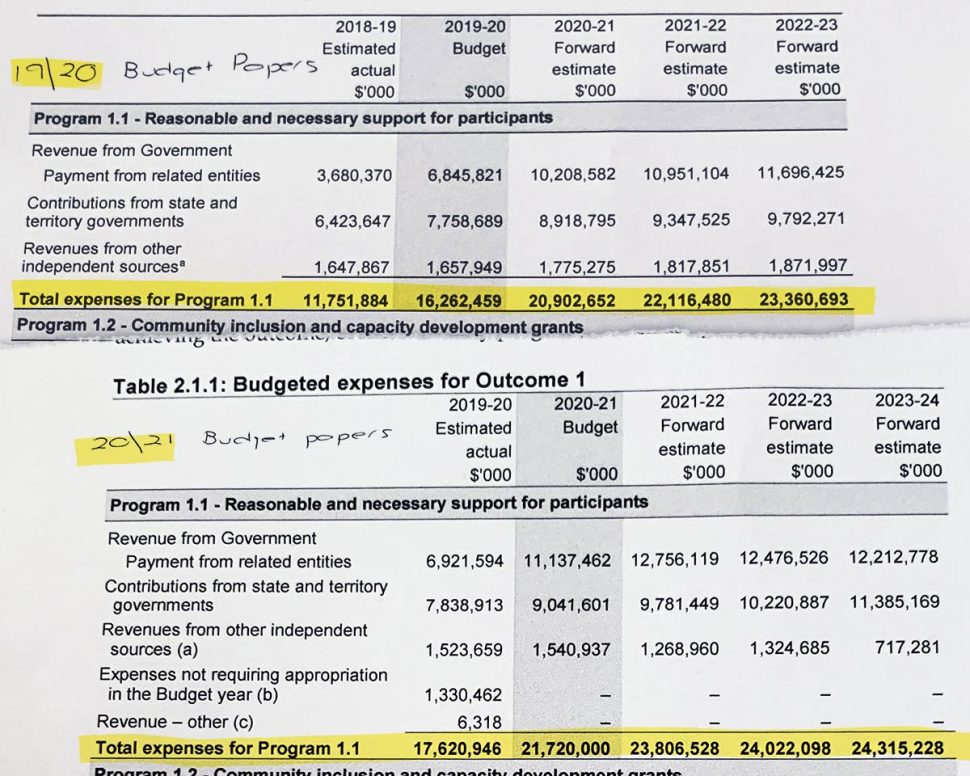 Let’s just look at the main part of the NDIS – what the budget papers call “reasonable and necessary support for participants”. In other words – funds for people’s NDIS plans. (Just note that we have rounded the figures up to make it easier to follow. And all these figures are billions. Billions with a B.)

So that’s some good news. Every year the scheme gets a little bit bigger – there are more people in the scheme, and a little bit of inflation and wage growth means things can cost more. The extra funding means there is more money for those things without the need to reduce everyone’s funding.

But (there’s always a but) what the figures also show is that the government certainly intends to limit growth. Because after a while (basically once they are sure transition is finished) the funding pretty much flatlines – there is only a little bit of growth.

Have a look at the chart below. It lists the most expensive programs in what is called the Social Services portfolio. The NDIS is in the top 10.

The expenses for the NDIS listed here include both funding for participants and the cost of running the NDIA. (And also for the Information Linkages and Capacity Building (ILC) grants which are now going to be run by the Department of Social Services. But that is a story for another day). 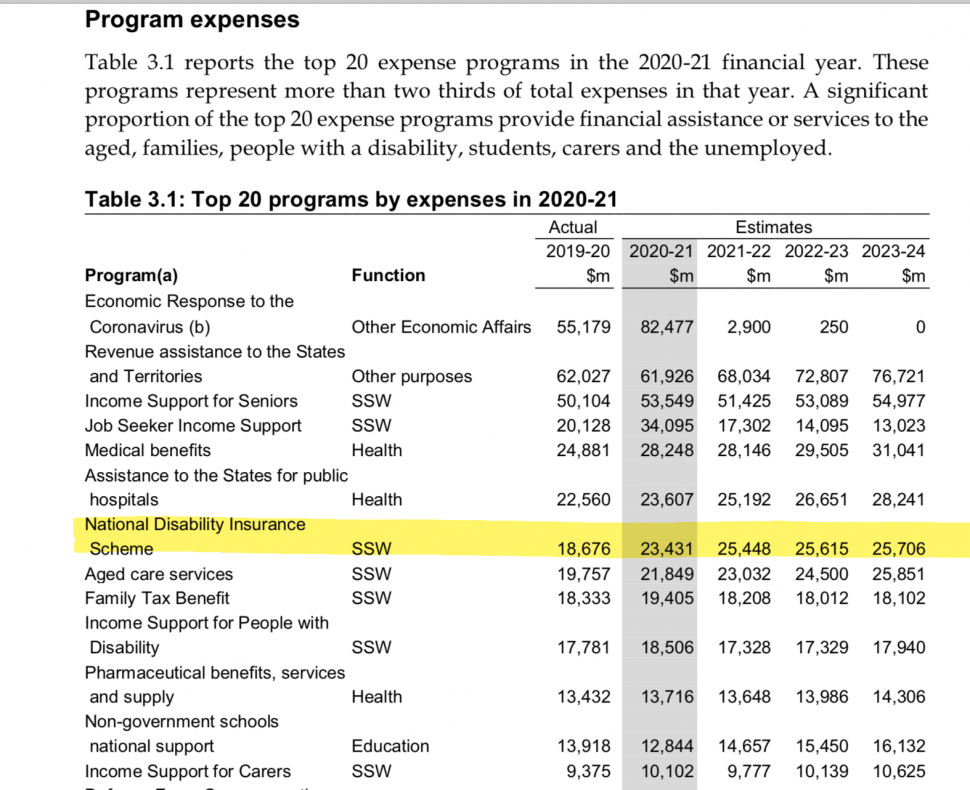 This chart shows that after this year, the funding only increases a little.

It makes clear that the government is determined to keep the scheme within a particular funding envelope. In other words – keep funding around the same levels.

That will only work IF the government (and the NDIA) are right about their figures in the first place. If they have accurately analysed and predicted everyone’s likely support needs and correctly factored that in. And given the poor data in disability for many, many years that is a very big if.

If they are wrong, and they have underestimated what people’s support needs are – then plans will be cut back regardless of what people actually need.

And that is obviously not a good thing.

So it would be something of an understatement to say that there is a lot riding on the accuracy of those figures.

The story of the Federal Budget and NDIS in the last few years has been the underspend. The NDIS has been underspent from the start – the full amount allocated to it has never been completely spent. That’s because people have come into the scheme more slowly than planned. It’s also because they have not spent all the funds allocated to them in their NDIS plans.

In the last couple of years that underspend has really added up – last year it was $4.6 billion alone. And all that money has just very quietly returned to the government never to be seen again.

People with disability and their families have never really been all that happy about that. Many people – including us – have argued that the underspends should be set aside. Kept for a rainy day. Or reinvested back into the scheme to get it working the way we all want it to.

And this year’s budget explains just why people thought that was so important. Because this year, for the first time, it appears there was an overspend. Somewhere around $1.3 billion.

But the papers don’t really explain why. The notes at the bottom say the overspend was a result of “strong growth in participant numbers and increased support for participants”.

The government also said it spent money on the Tune Review.

The real answer lies in the NDIA’s Quarterly Reports which show that average plan size is increasing. And in some areas like Supported Independent Living plan budgets are going up even more.

It’s also true that the longer people are in the scheme, the more of their funds they are likely to spend. Because, as everyone here knows, it takes a while to work out how to navigate the system and to start to set things up for yourself or your family member. And now that we have more people who have been in the scheme longer, more money is going out the door.

Which is a good thing because it means people are getting the support they need.

But these figures also help explain why the Minister and the NDIA are introducing Independent Assessments in such a big hurry.

And why the NDIA’s corporate plan has such a big focus on scheme sustainability.

Was there much else for people with disability and their families in the Budget?

There was little bit more money for the NDIS Quality and Safeguards Commission – but that had already been announced. And apart from extra staff it is not clear what it will be spent on.

There was also a little bit of funding to try and help young people with disability living in aged care. But again that had already been announced.

And there was some funding for some of the key actions in the National Roadmap for Hearing Health in Australia. As well as some long overdue funding for survivors of Thalidomide.

And finally people who receive the Disability Support Pension or the Carer Payment or Allowance will get two $250 payments over the next few months.

While that is welcome, we also know that many people with disability and their families have struggled to make ends meet as a result of extra costs bought on by the COVID19 pandemic and lockdowns. (You can read more about that in our report Left Out and Locked Down that we released recently).

While this will help, we know it won’t go far.

The budget was also particularly notable for what was missing

Given that we are facing a once-in-a-generation economic challenge, and a global pandemic to boot, this would have been a great opportunity to throw the rule book out the window. To come up with some truly innovative and interesting policies, programs and ideas to create lasting change AND kick start the economy. Invest in some things that will really benefit both individuals and our community while also putting the jumper leads on economic growth.

Take jobs for example. People with disability find it hard to get jobs in open employment at the best of times. But with fewer jobs and more people applying for them, it’s going to be even harder for people with disability to land a job thanks to ableism and discrimination.

That’s tough on everyone but particularly hard on young people with disability trying to get their first jobs.

And because employment is a nut successive governments have failed to crack, this would have been the perfect time to come up with a decent plan. Because changing employment rates of people with disability won’t happen on its own – it needs concerted and resourced effort.

Investing in social housing at this particular time makes both social and economic sense. It creates jobs while at the same time creating a lasting benefit for people who are homeless, live in precarious housing situations or who are living in poverty while they try to pay exorbitant rents.

And making sure that social housing is accessible benefits absolutely everyone.

So failing to invest in social housing at this time and in this budget really was a missed opportunity.

Media coverage of the Federal Budget

New funding for the NDIS? What about jobs for people with disability?

Federal Budget to include cash payments worth $500 for aged, family and disability welfare recipients

‘This budget falls drastically short for Australians doing it tough’