The Prime Minister and the new Minister for the NDIS have repeatedly said that fixing the NDIS is a top priority. What do they have in mind? Our EAC champions went to Canberra to find out.

“’Plans should be two to three years instead’. I agree. We made an election commitment about that. We are on our way to doing it.

‘Clearer timeframes for home modifications?’ I agree with that too.”

That’s what new Minister for the NDIS Stuart Robert told Every Australian Counts champions Lynne and Terri yesterday at their first meeting with the Minister.

Lynne and Terri, as well as EAC campaign director Kirsten Deane and chair of the National Disability and Carer Alliance Leah Van Poppel, met with Minister Robert at Parliament House to deliver some really important messages on behalf of the whole EAC community.

Over the last few weeks we asked people what they wanted they most wanted to tell Minister Robert – what was the most important thing they thought needed to be done to fix the NDIS?

Almost a thousand people from all around the country answered the call with hundreds of simple, practical ideas to get the scheme working the way it should – from quicker, simpler easier processes, to better communication, to more staff to clear backlogs. And not just more staff, but better trained staff with more experience with disability.

The group also gave the Minister Every Australian Counts’ lengthy submission to the last inquiry held by the Joint Standing Committee into the NDIS. More than one thousand people from around the country took the time to tell the Committee what changes were urgently needed to get the NDIS back on track.

So the Minister has no shortage of fantastic ideas about what he needs to do as he kicks off his new job.

The Minister opened both books, saw the suggestion for longer plans and said – yep completely agree. We know you will all be pleased to hear that!

Terri, Lynne and Leah also had a chance to tell the Minister about all the issues that regularly come up at Make it Work forums all around the county. Issues such as the need to set timeframes and stick to them, the need for more flexibility in how you can use your NDIS funds and the need for much more focused attention on groups who were really missing out, such as people with complex needs, people from Culturally or Linguistically Diverse backgrounds or people without families in their corner.

And just in case the Minister missed the need for urgency, Lynne was able to give him a practical demonstration – she went to the meeting in a hired wheelchair because her new and approved chair is still yet to arrive. Sound familiar? 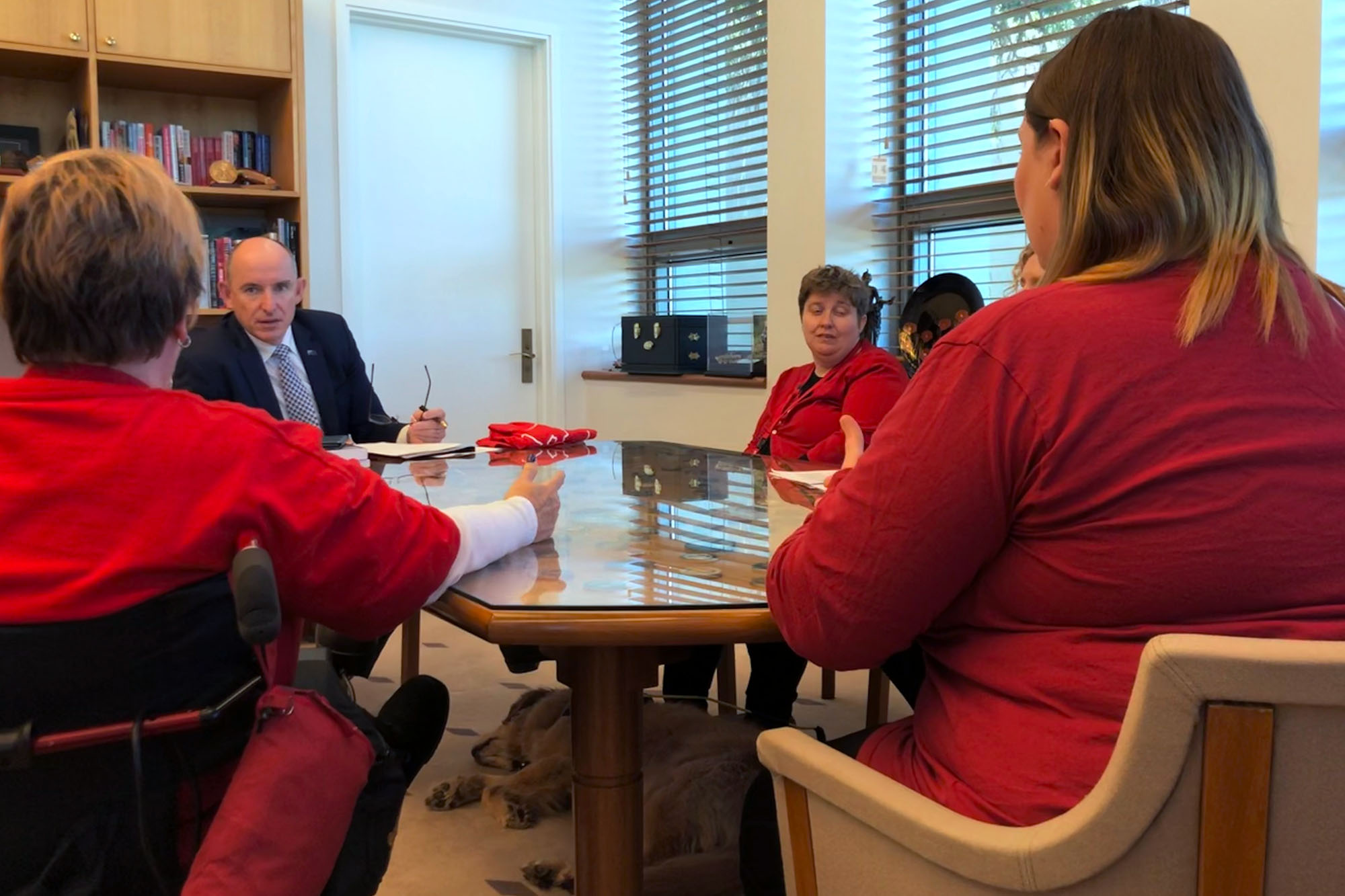 In turn Minister Robert promised the group that the government was developing a 12 month timetable to resolve many of the issues that were raised, including giving the National Disability Insurance Agency more resources to help sort out some of the delays and improve the IT system. The Minister said this plan would address many of the issues raised by EAC, including allowing participants to have a single point of contact and be able to see drafts of their plan before they are approved.

The Minister also said that as part of that 12 month plan, he will get all the Disability Ministers from all around the country to meet together more regularly to help sort out the issues.

Minister Robert said that he really wanted the current issues fixed so everyone could finally get on with the job of making sure the NDIS delivers the kind of change we all want to see.

At EAC we are really glad to hear that. We completely agree that it is way past time to get all this stuff sorted – we want everyone to get on with the job of making sure the NDIS gets back to its original vision. We want to get on with the job of getting people into their own homes, into jobs, into their communities and out doing the things they want to do – instead of stuck at home try to wade through the NDIS paperwork and red tape. Or missing out altogether.

So it was good news – but we also know the devil is always in the detail. We know we have to keep the pressure on to make sure there is action that makes a real difference on the ground.

We’ve got some ideas about how to do that – but we are going to need your help to pull them off. We know we are at our most powerful when we all work together. It’s how we got the NDIS in the first place – and it’s how we will get it fixed.

So keep an eye out to find out how you can get involved.

KIRSTEN DEANE: We want to thank you very much for meeting us here –

When you were announced as the new Minister for the NDIS we put a call out to the Every Australian Counts community, asking them what did they want to tell the new Minister about what was most important to them about the scheme.

And we had more than 1,000 people respond to that.

MINISTER ROBERT: Lovely. How good’s that!

KIRSTEN: So Lynne has a presentation – that’s all of the messages –

KIRSTEN: – from everyone all around the country

KIRSTEN: Letting you know how much they want the NDIS to work and their ideas for how to make that happen.

So that’s a little bit of light reading.

MINISTER ROBERT: What a good idea! Thank you.

KIRSTEN: Well you can actually thank all of the people who responded.

And what we’ve got here from Terri is that a little bit earlier in the year the Joint Standing Committee put a call out and said “this will be our last report in the life of this Parliament, what do you want us to know?”

MINISTER ROBERT: And these were the submissions that went to the Committee?

KIRSTEN: That went to the Committee. But we thought that you might like to have a bit of a read of that to see what people told the Committee and –

MINISTER ROBERT: Absolutely. Look at this – “Plans should be two to three years instead.”

I agree. We made an election commitment about that. We’re on our way to doing it. That’s superb.

MINISTER ROBERT: “Clearer timeframes for home modifications” I agree with that too. Oh this is great!

I’m looking forward to reading that.

KIRSTEN: Thank you. And our last gift for you is that we’d like you to be an honorary member –

KIRSTEN: – of the Every Australian Counts community.

MINISTER ROBERT: What size did you get?

KIRSTEN: Um extra large. Only because you’re – no, no!

KIRSTEN: Because – we had a discussion – because you’re tall.

MINISTER ROBERT: Ok. So it’s not a reflection or anything.

KIRSTEN: No. It is not. Because you’ve been to the gym this morning.

MINISTER ROBERT: I did go to the gym this morning because I had a hamburger last night.

Look, thank you – that is lovely.

Bless you guys richly, for all that you do.

Thank you for the opportunity to come and serve with you.