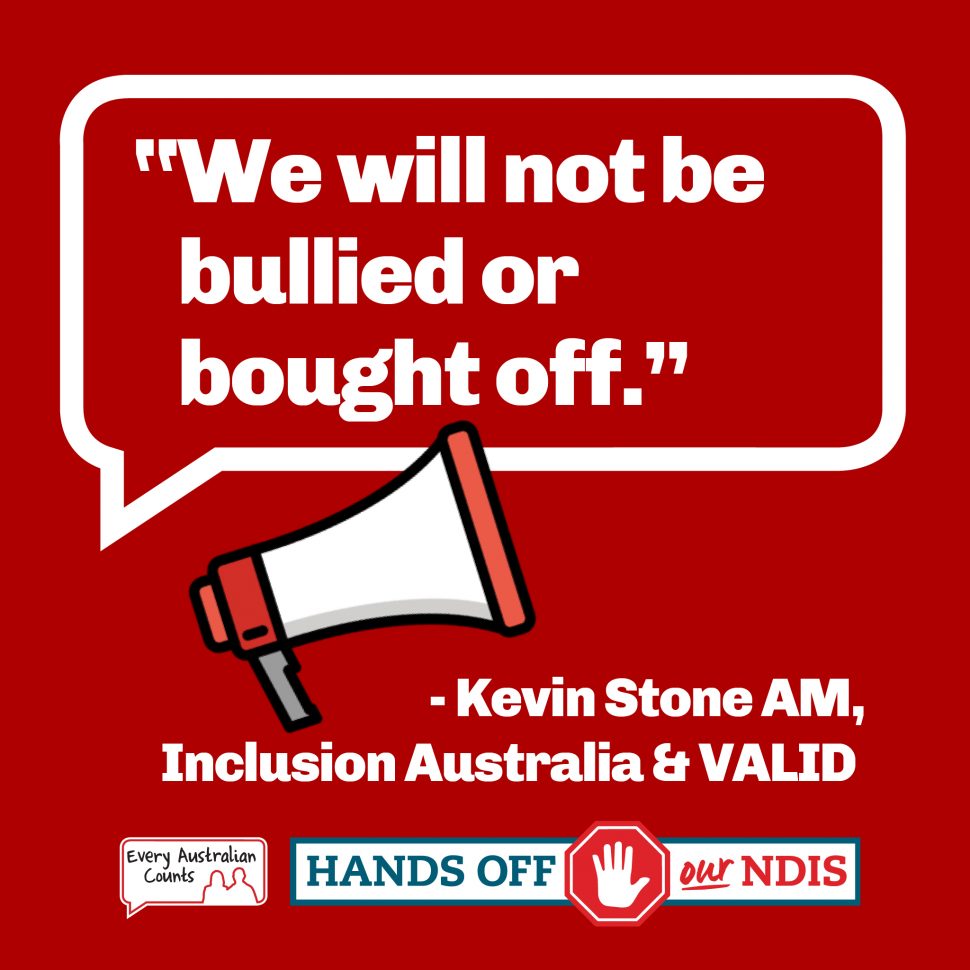 “The NDIA is at risk of turning people with a disability and families, who have been the Scheme’s greatest supporter and most important ally, into a desperate and angry enemy.” Kevin Stone, the highly-regarded intellectual disability advocate has delivered a blistering speech on the NDIS – calling not just for independent assessments to be scrapped – but also for the NDIA CEO and Board to be sacked. Watch the video, read the transcript – or join the fight here.

“There are very few people working at the NDIA, or in government now, who remember the campaigns and rallies of the past, so let me remind you. We will not stand by and watch this happen. We will not be bullied or bought off. People with disabilities and their families will come together across the country and we will fight you.”

Kevin Stone – summing up exactly how people with disability and families are feeling about NDIS compulsory assessments and other proposed changes to the NDIS Act.

Kevin is the CEO of VALID and the Chair of Inclusion Australia – advocating and representing people with intellectual disability in both Victoria and across Australia. They represent many of the people with disability who will be some of the most seriously disadvantaged if the government’s planned changes get through parliament.

Watch Kevin’s speech, read the transcript, or join the fight and find out how to take action below.

I’m Kevin Stone. I’m the CEO of VALID and the Chair of Inclusion Australia.

Late last year, VALID stopped working with the NDIA on anything to do with their independent assessments. We had come to the conclusion that they do not have the best interests of people with disabilities or their families at heart.

Nothing they have said or published since persuades me that we got it wrong.

They dress it up in all sorts of clever ways but the bottom line is that they are bent on dismantling the scheme that we fought for. In many ways, what we’re fighting is the tide of a dark history coming back to haunt people with disabilities and their families.

More than 10 years ago we rallied in support of the NDIS. We were fighting for a disability support system that would live up to the vision of the United Nations Convention on the Rights of Persons with Disabilities. A system that would create a quality of opportunity for all Australians with disabilities.

Unlike a lot of people working at the NDIA now, people with a disability and their families remember how it was before, during the 1990s into the new century when we had the Commonwealth State Territory Disability Agreement. It was a cruel and inefficient system with federal and state governments arguing and buck-passing as people with disabilities languished on waiting lists all over the country.

While politicians passed the buck, many people with disabilities remained hidden away in institutions and many died without ever receiving proper support. When the campaign for the NDIS succeeded, it gave us hope that we had left those dark times behind. The NDIS was meant to put Australia on the right side of history to close institutions and institutional mindsets forever.

The NDIS was designed as insurance for all Australians if and when they need it. It’s been a wonderful thing to see so many lives transformed for the better by the NDIS.

It’s had its problems which we’ve all been willing to work with them to fix.

But we have come to the conclusion that they are not really trying to fix it. They are trying to take us back to the bad old days of buck-passing, rationing, and of putting people with a disability back into their bureaucratic cost-cutting boxes.

Right now, big decisions about our NDIS are being made by powerful people who do not understand the impact of the changes they are making. Dirty deals are being done to satisfy vested interest groups. Massive money is being wasted on consultancy firms with no transparency or accountability.

Powerful privatised service empires are being built on the backs of disempowered people.

Bankers, business people, and insurance actuaries are devising new ways to clump, cluster, and classify Australians with disabilities for the convenience of government.

It is prejudice, disguised in new and ugly forms.

And we will not stand by and let it happen.

These so-called ‘independent’ assessments are not independent at all. The NDIA have chosen who will do the assessments and they are paying per assessment. The more assessments they do, the faster they do them, the more they get paid.

That’s not independence, that’s a scam.

When we stop viewing people with disability as individuals and turn them into so-called ‘personas’ – when we put people into boxes as the NDIA is trying to do – those of us with a sense of history know where it leads. In five, ten, 15 years from now, the bureaucratic boxes they are building will become the new and more insidious institutions of the future. Less visible in the asylums of the past but just as shameful.

Like many people with disabilities and families across the country right now, I have lost all confidence in where the NDIA is taking us.

They have made it clear that they trust no one. The NDIA does not trust participants and their families to speak to their own needs.

They’re assuming people with disabilities are ignorant and greedy. So, they demand assessments to prove every last thing – but then they ignore those same reports.

They say doctors and allied health professionals can’t be trusted, because of so-called ‘sympathy bias’.

They do not trust service providers, who they say are over quoting.

They do not even trust their own planners and delegates to make the decisions that they are employed for.

According to the NDIA and the Minister for the NDIS, no one can be trusted, and everyone is a liar. But it is the NDIA who has manipulated and hidden the truth.

They have misquoted academics.

They have set up sham trials for a process that they have already decided will happen.

They’ve refused to allow public scrutiny or independent evaluation of the secret black box that they call the ‘Personalised Budget Tool’. This black box contains a decision making algorithms, that will make or break people’s lives. They will not tell us what else they will use that data for.

They hold round table meetings and phony consultations with our advocacy peaks. They have no intention of genuinely listening.

They say compulsory tick-a-box assessments administered by a stranger will make the scheme fairer. They say the changes will be good for us. And when we disagree they say we’ve misunderstood them. They think we just don’t get it. We know exactly what they’re doing.

We’ve been here before.

This is the government that brought us Robodebt for Centrelink. Who have bungled the COVID vaccine rollout – deprioritised people with disabilities and put their lives at risk.

And now they want us to accept Roboplans.

Government Ministers and NDIA executives have become obsessed with automation at the expense of everything and everyone.

NDIS independent assessments will put people with disabilities back onto the conveyor belt to congregation. Because it will be all that their funding will afford them. And don’t be deceived. This isn’t by accident. This is by design.

Recently, we’ve heard dangerous comments from the Prime Minister, the Minister for the NDIS and the NDIA itself – insinuating that some participants might be too expensive. Suggesting that people with disabilities themselves are sending the scheme broke.

It is contemptible stuff.

They are trying to turn Australians against the very spirit of the NDIS that the whole nation showed its support for – an NDIS that gives people respect, dignity, choice, control, and human rights.

We need to understand, the compulsory assessments are just one part of their big, bad plan.

They are going to ignore your goals.

Planning will be non-existent.

They want to stop the states and territories from being part of the decision-making.

They want to control your choices by redefining reasonable and necessary.

The NDIA is at risk of turning people with disability and families – who have been the scheme’s greatest supporter and most important ally – into a desperate and angry enemy.

There are very few people working at the NDIA or in government now, who remember the campaigns and rallies of the past so let me remind you.

We will not stand by and watch this happen. We will not be bullied or bought off. People with disabilities and their families will come together across the country, and we will fight you.

So once again, I say to the new Minister for the NDIS Linda Reynolds – stop the independent assessments debacle before it causes further damage. All the problems they tell you will fix are only gonna be made worse. So cut your losses while you still can.

Over the past 2 days we’ve come together across Victoria and Australia, and we’ve talked a lot about the threats posed by COVID-19 and the things we need to need to do to stay healthy and connected. And many people have also talked about the threat posed by the NDIA’s independent assessment plans.

People with disability and their families have told us – and we will tell the world – we can’t be beaten.

Want to take action right now? Our powerful community can keep the pressure on Minister Reynolds – she can put a stop to dangerous independent assessments!

Email her to let her know it is time for the government to keep their #HandsOffOurNDIS!