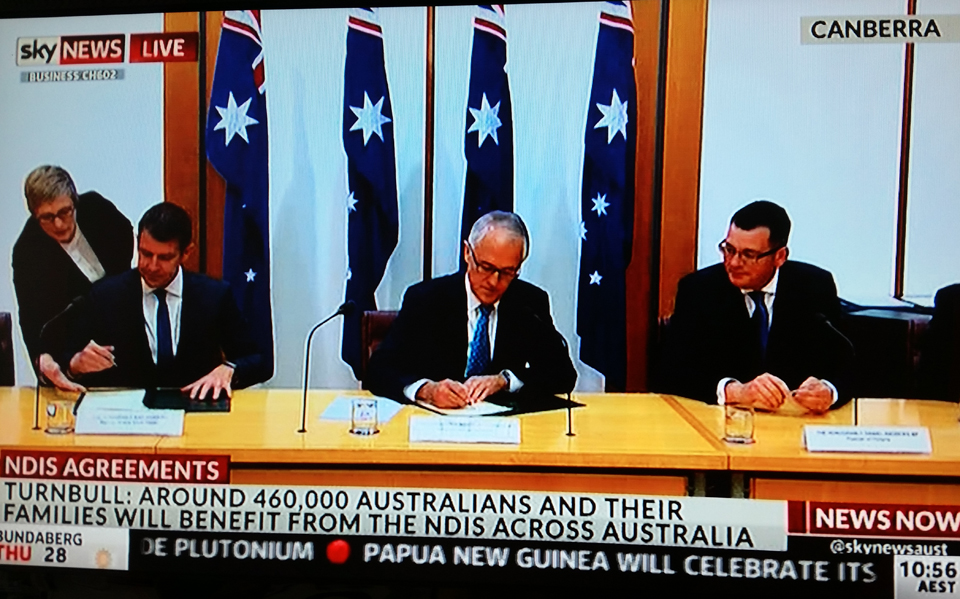 As one of his first acts as new Prime Minister Malcolm Turnbull released the NSW and Victorian roll out plans during a press conference today. If you missed it, here’s a taste of what he and the state Premiers had to say about this significant milestone.

This is a significant milestone marking the roll out of “one of the largest social policy reforms in our nation’s history.”

“It will be carefully managed so it stands the test of time so it is sustainable and available to all those who need it.”

“This is an absolutely inspirational day for the country.”

“Many people had the dream it could happen. The great news is it is happening and more importantly it is funded.”

The Premier of Victoria said the day was really about the disability community:

“This is not a day for the politicians. It is a day for those who campaigned for so long…for those in our community who have every right to demand a fair go.”

“This is a fantastic example of what can be achieved when we work together.”

“It is an emotional and proud day…an honour to be part of something so significant.”

The Minister responsible for the delivery of the NDIS at the Federal level, Mitch Fifield, said:

“This is a great day for people with disability and their families.”

“This is an important step on the road to giving Australians with disability a life they deserve.”

“Some things are too important to be ruined by day to day partisanship.”

“This is not the end point. There’s lots more work still to do.”

“We are underway in negotiating with other jurisdictions. Rest assured that all Australian governments are 100% committed to deliver the NDIS in full.”

Following the official signing of the agreements, Opposition Leader Bill Shorten has this to say:

“This country is smart and rich and compassionate enough to give people with disability and the people who love them an equal go in Australia. It is really great news today.”