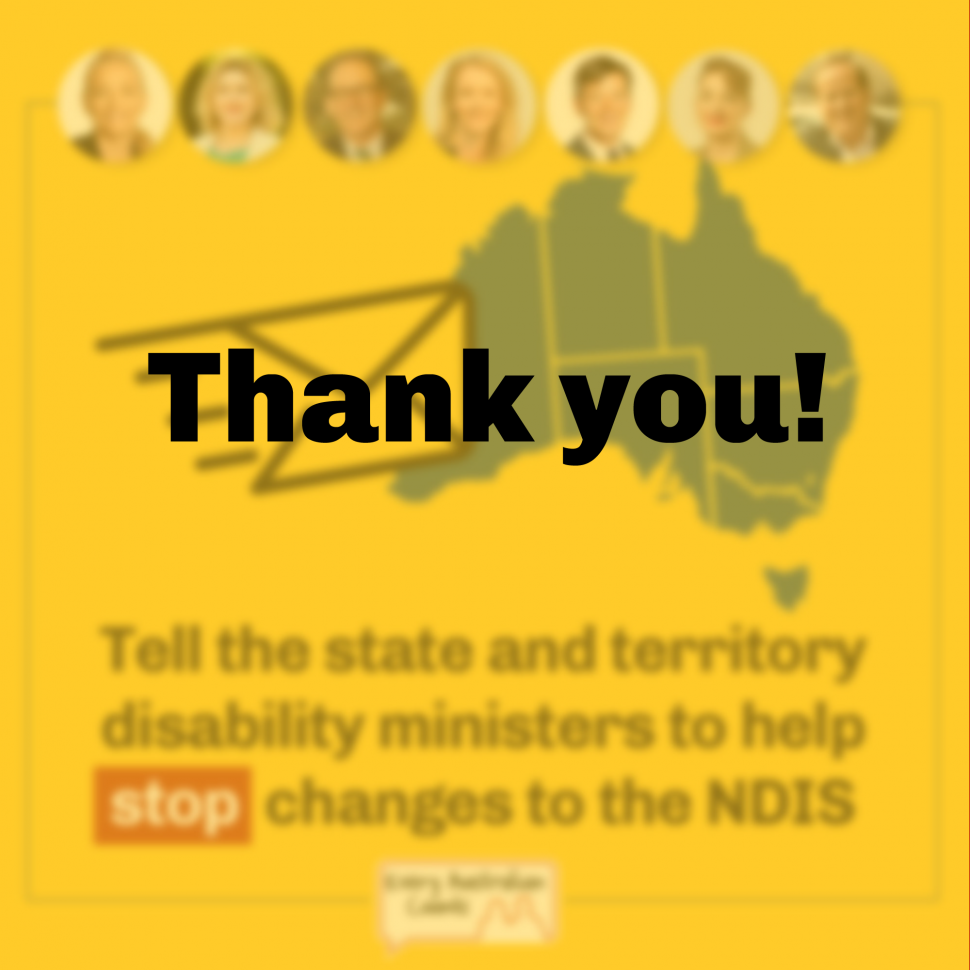 Last Friday, Minister for the NDIS Linda Reynolds met with each of the state and territory Disability Ministers, to ask them to support her plans for the biggest changes to the NDIS since it started – including compulsory ‘independent’ assessments.

And the big message to come out after the meeting was – NDIS independent assessments as we know them – are OVER.

How did this happen?

📌 In less than a week, more than 5,000 people with disability, families, and people who work in the sector contacted the state and territory Disability Ministers ahead of the meeting on July 9.

📌 Over the last three months more than 7,500 of you emailed Minister Reynolds to say “Hands off our NDIS”. Before that, former NDIS Minister Stuart Robert received more than 4,000 emails.

📌 And since the plans were first announced at the end of August last year, thousands of emails, phonecalls, media stories and submissions have made their way into the hands of the powers that be.

📌 Because of your actions the state and territory Disability Ministers were able to go into Friday’s meeting armed with your concerns, and those from the IAC– making it much easier for them to say NO THANK YOU.

📌 And because enough of those state and territory Ministers rejected the Federal Government’s plans Minister Reynolds was forced to announce “Independent Assessments are dead.”

But compulsory assessments were never the only big change people have been worried about.

There are plenty of unanswered questions

What’s the difference between a ‘person-centred’ assessment and an ‘independent’ assessment?

Do they still plan to change the definition of reasonable and necessary?

Do we have any reason to believe work on the algorithm/black box/personas has stopped?

Will they cancel the contracts with the assessment providers?

What are their plans for genuine and transparent co-design?

And what about the legislation – when will we find out what they’re planning to put in and take out? How long will we get to provide feedback on it? When do they want to introduce it to Parliament? What will they try to sneak in?

And how transparent will they be with the ‘cost-pressures’?

So while we still have many more questions than answers – two things are for sure.

This is an enormous victory.

And YOU made it happen.

People with disability, families, the organisations who support us – and everyone who has raised their voice to fight for our NDIS have made an enormous difference.

And while we are all going to remain very cautious about what comes next – we don’t want you to forget to take a big moment in recognition of what you have all done by working together and making yourselves heard.

From the bottom of our hearts – we thank you.

Stay tuned – we will let you know about what comes next as soon as we know more.

Statements from the Ministers

The Conversation – NDIS independent assessments are off the table for now. That’s a good thing — the evidence wasn’t there

The National Disability Insurance Scheme is facing a major overhaul, with the Morrison government meeting with State and Territory disability ministers today to try and get them onboard a controversial plan that advocates say puts disabled people at risk.#TheProjectTV pic.twitter.com/kXsw2ZZQdn