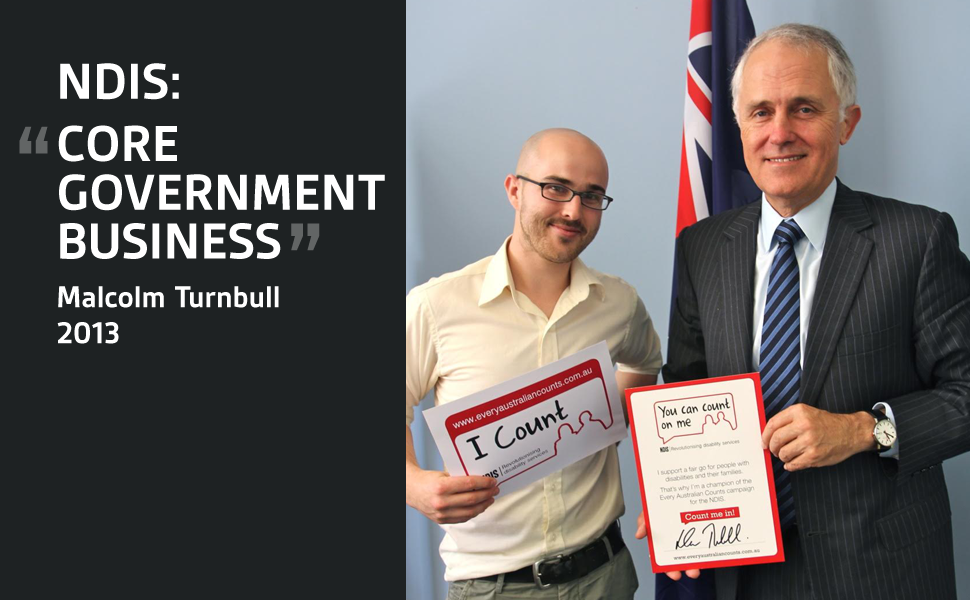 As Australia wakes up to the news that Malcolm Turnbull has replaced Tony Abbott as our new Prime Minister, we have a look at what he has said on the public record about the NDIS.

In November 2011 an Every Australian Counts supporter visited Mr Turnbull, his local member, in Opposition at the time.

Our supporter has a brother with an intellectual disability and was employed as a disability support worker. In a blog he said:

“I told Malcolm about how important funding support through the NDIS would be for my brother’s care – helping him and my family, physically, emotionally and financially.”

He asked Mr Turnbull to sign the Every Australian Counts pledge and have his photo taken together (above).

“You can count me in. I support a fair go for people with disability and their families. That’s why I am a champion of the Every Australian Counts campaign for the NDIS.”

Fast forward a few years to 2013 and Mr Turnbull is again advocating for the NDIS, this time on the floor of the Parliament. Here is his Facebook post from that time: 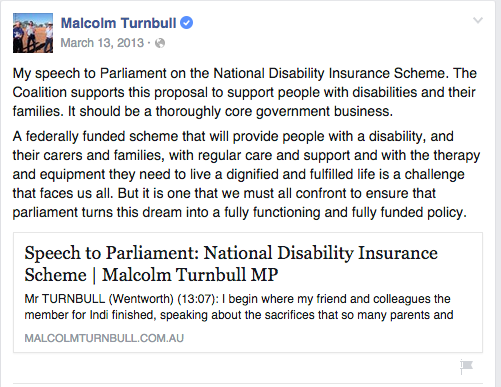 You can read his full speech here but some of the points he makes are:

“It is a testament to the significance of this reform that we have seen so many members from both sides of this chamber add their voices to this debate. As the Leader of the Opposition has said, this truly is an idea whose time has come, and the coalition is strongly committed to an NDIS.”

“Australia’s funding and support system for those most in need is clearly broken, and this national disability insurance scheme has been a long time coming.”

“I am proud to say that along with all the other members of the coalition—and I note in particular the advocacy work of Senator Mitch Fifield—I support this proposal to support people with disabilities and their families. It should be a thoroughly core government business.”

By the end of 2013, the freshly elected Minister for Social Services Mitch Fifield, responsible for the delivery of the NDIS, addressed the National Press Club and gave a special mention to Mr Turnbull:

“But I also want to acknowledge Tony Abbott and, before him, Malcolm Turnbull, who as Leaders were unstinting in their support of the NDIS and who never thought, for a moment, to make it a matter of partisanship.”

Prime Minister Turnbull has been a long time supporter of the NDIS and he must now put these words into action. The NDIS roll out plans, the agreements between the Commonwealth and individual state and territory governments are ready. Mr Turnbull must make these one of his first priorities.