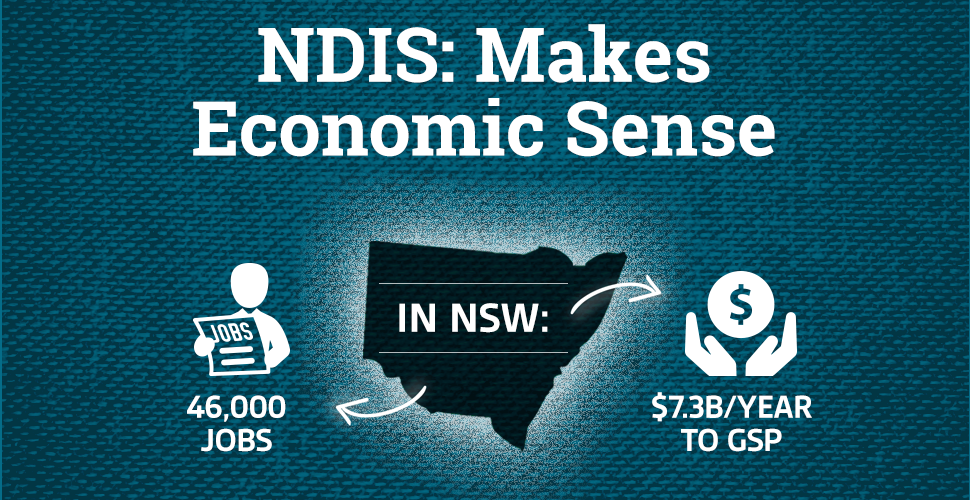 The NDIS will create thousands of jobs and add up to $7.3billion to NSW’s economy alone according to new report released today – results of the biggest ABS survey of people with disability and their carers ever undertaken.

The boom to the economy has been repeatedly forecast in earlier reports from the Productivity Commission and other academics and reinforced again in this report commissioned by Every Australian Counts and National Disability Services.

The report says that in NSW the NDIS will:

“We have always known the NDIS is the right direction for our nation,” he said. BDUEGT

“This report proves the NDIS is not just a socially responsible scheme, it’s what Australia needs. The economic benefits cannot be denied.

“The NDIS will not only make a huge difference to the lives of 460,000 Australians with permanent and significant disability but will repay the taxpayer many times over.

“Once fully implemented the NDIS has the potential to increase GDP by $22billion. We’ve heard a lot recently about potential budget blowout but this report shows again that the NDIS could actually be our golden ticket.”

The modelling is based on an ABS survey of over 75,000 people with disability and their carers. At about one 300th of the Australian population, this makes it the largest sample survey conducted by the ABS in this area.

Manager of State Operations for National Disability Services, Tony Pooley said the report confirmed the appetite many people with disability have to join the workforce.

“There are thousands of people with disability across Australia eager to work and thousands more carers who cannot wait for the chance to get back into the workforce,” Mr Pooley said.

“The NSW Government has been a leader in regard to the NDIS and in investing in a strong disability service sector. Their investment in the NDIS will be rewarded through these terrific gains.”

Every Australian Counts and National Disability Services are working to model the economic benefits of the NDIS in each state and territory. Stay tuned as others are released.