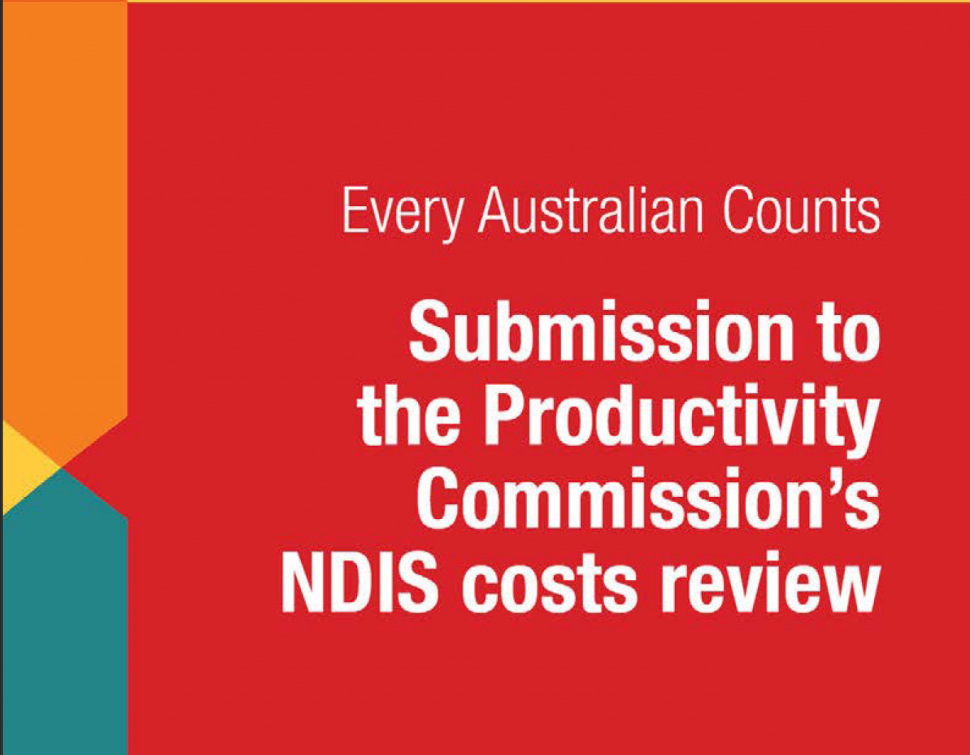 The Productivity Commission this week released early findings in its review into the costs of the NDIS – and while there is good news about support for the scheme, there are plenty of things to fix.

Earlier this year Every Australian Counts supporters made hundreds of submissions to the Productivity Commission’s review into NDIS costs. The review is looking at the costs and sustainability of the NDIS now and over the long term.

We included your stories about the NDIS and your feedback to the Every Australian Counts community survey in our own submission to the review.

The overwhelming message from all of you is that the NDIS isn’t perfect yet but it is a scheme that will transform the lives of hundreds of thousands of Australians with disability now and in the future – if the scheme reaches its potential.

And it seems the Productivity Commission agrees.

In its position paper released this week the Commission described support and goodwill in the community for making the NDIS work as “extraordinary” but said there were serious issues that need ironing out, particularly in the planning process.

The Commission said NDIS costs are largely on track, with many but not all participants receiving more supports than before, with more choice and control.

However it said the “ambitious” speed of the roll out is putting the NDIS at risk – with too much emphasis on meeting roll out targets and not enough emphasis on the quality of NDIS plans for participants.

“Given the extraordinary scale, pace and nature of the changes the scheme is driving, we are seeing some big challenges. A key concern is the speed of the rollout and its impact on the experience of participants and providers through the planning process, plan quality and market development.”

“A real challenge is growing the disability care workforce needed to deliver the scheme. As many as one in five new jobs created in Australia over the next few years will need to be in the disability sector. There are unlikely to be enough providers and workers as the scheme rolls out under current policy settings.”

It’s clear they heard your ongoing support for the scheme.

Here’s what Karen said in her submission:

“The NDIS needs to stay. Lives will potentially be shattered if it doesn’t. Furthermore, if its financial scope is altered; lives will be limited, and we will be back to a ‘deserving vs undeserving’ model of service, as opposed to the power of choice and control that we have now. Please don’t take our human right of choice away!”

“I cannot express adequately the transformation that the NDIS has made for me. I was ashamed to be an Australian. I felt that disability comes randomly and that those who it visits are left to cope unsupported and alone. Now I feel that my country has taken responsibility for its disabled citizens and that we as a nation are sharing the caring, looking after each other and acting as a civil and humane society should. Advance Australia Fair!”

But they also heard the message loud and clear that there are plenty of issues regarding the implementation of the NDIS that need to be fixed.

So what happens next?

The Commission is asking for feedback on its position paper until July 12 and expects to finish the review by October.

The paper shows that issues with the NDIS can be ironed out if the governments works with people with disability and the disability sector to get it right for everyone.

In the words of Social Policy Commissioner Richard Spencer:

“The NDIS is a major, complex, national reform – the largest social reform in Australia since the introduction of Medicare.

“Everyone wants the NDIS to work, but there are challenges to be overcome and work is needed by all governments. Putting the enormous goodwill behind the NDIS into action is needed now more than ever.”