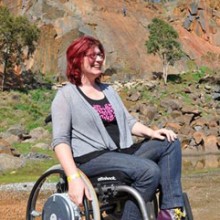 Around the country, disabled Australians and their families were celebrating. Australia is #ndisready, social media proudly proclaimed. A sea of purple signs, bearing the words ‘I <3 ndis’, rolled across our computer monitors and television screens.

But in Western Australia, the celebrations were bittersweet. We’d campaigned just as hard for a national scheme, but our rollout – the rollout of a scheme yet to be determined – has been delayed by at least a year. There are no guarantees or promises that we won’t be worse off than other Australians, and many of us feel as though we’re in limbo waiting for forces beyond our control to make decisions about a scheme that will impact upon the rest of our lives.

The official line is that our trials have been extended for another year. The Commonwealth and Western Australian State Governments are running parallel trials of two schemes – NDIS and ‘WA NDIS’ (formerly ‘My Way’). They’ve been extended to additional locations too. Down the Armadale, Murray and Serpentine corridor in one direction for the WA trials. Up to Bayswater, Bassendean, Chittering and Toodyay, Northam and York for the federal trials. They say that the expanded trials will allow a further 2,700 people to access the NDIS in WA. They say the Minister will make an announcement ‘about governance’ in October. They say that ‘independent assessors’ are comparing and evaluating both schemes.

But what are we saying, the people who will be directly affected by this scheme? And who is listening?

Our new Disability Services Minister, Donna Faragher, has made the very wise decision to use her own resources and find out for herself. The Ministerial Advisory Council on Disability (MACD) are engaging community members to have their say on service delivery and key improvements to the scheme.

People with Disabilities WA also continue to ask their members what they think. With other advocacy agencies and not for profits, they’ve been investigating system design issues, experiences of obtaining information and experiences with the planning and plan implementation process. There’s no clear indication that one model is performing consistently better than the other, with strengths and weaknesses identified in both schemes.

As a disability advocate who has been involved in the design, development and rollout of the NDIS, I’m just as confused as everyone else.

I sat on the Workforce and Sector Capacity Expert Group during the design of the NDIS. I’ve attended hundreds of CEO roundtables and forums and workshops on the NDIS. I am one of several disabled people who run and administer the NDIS Grassroots Discussion Group, comprised of almost 15,000 members who are sharing information daily. I speak with disabled people and family members in both schemes daily. I probably know more about the legislation and design and implementation than most people.

But when it comes to knowing what disability services in WA will look like two years from now, I’m in the dark.

Here’s what we’re saying on the ground.

On Facebook groups and at coffee meetings, at peer support groups and around kitchen tables. There are rumours and gossip and official secrets and real information packed into a confuseopoly labelled ‘what’s happening now’ and ‘what’s going to happen in the future’.

We’re complaining about implementation and system design issues in both schemes. Way down here on the ground, where the folks at the top can’t see without a telescope.

We’re saying we want control of our funding – not necessarily just self-management, but also flexibility about the use of our funding.

We’re saying that we’re tired of listening to representatives from both agencies self-promoting and reciting the same, tired old rhetoric about satisfaction rates at public events and workshops. We want real information.

We’re speculating about the design of the survey topics for suppliers and participants as carried out by the ‘independent assessors’ – and whether they are the topics that we’d include if we wrote them ourselves.

We’re wryly commenting about the old language and cultures creeping back into both systems, with people talking about levels and boxes and ways to neatly package disabled people into more conveniently labelled products – and wondering who isn’t being packaged or spoken about at all. Especially people from regional and remote Western Australia, homeless folk, Aboriginal people and people from CaLD backgrounds.

We’re wondering how much influence we will have in the decision making process, and how. Whether it will be others who are making decisions ‘for’ and ‘to’ us, like they have for most of our lives.

And most of all, we’re talking about what our lives will look like in comparison with other disabled Australians.

Like my fellow West Australians, I want clear answers, not rhetoric. Most of the people who are sitting around the decision making tables get to go home at night – their involvement in the disability sector is an opt-in, elective basis. This is about their jobs, but this is about our lives.

It’s about time the WA disability sector and both governments put self-interest and bias aside and started thinking about what is best for disabled West Australians and their families. From our perspective, not theirs.

This opinion piece uses identity first language in accordance with the author’s preferences.