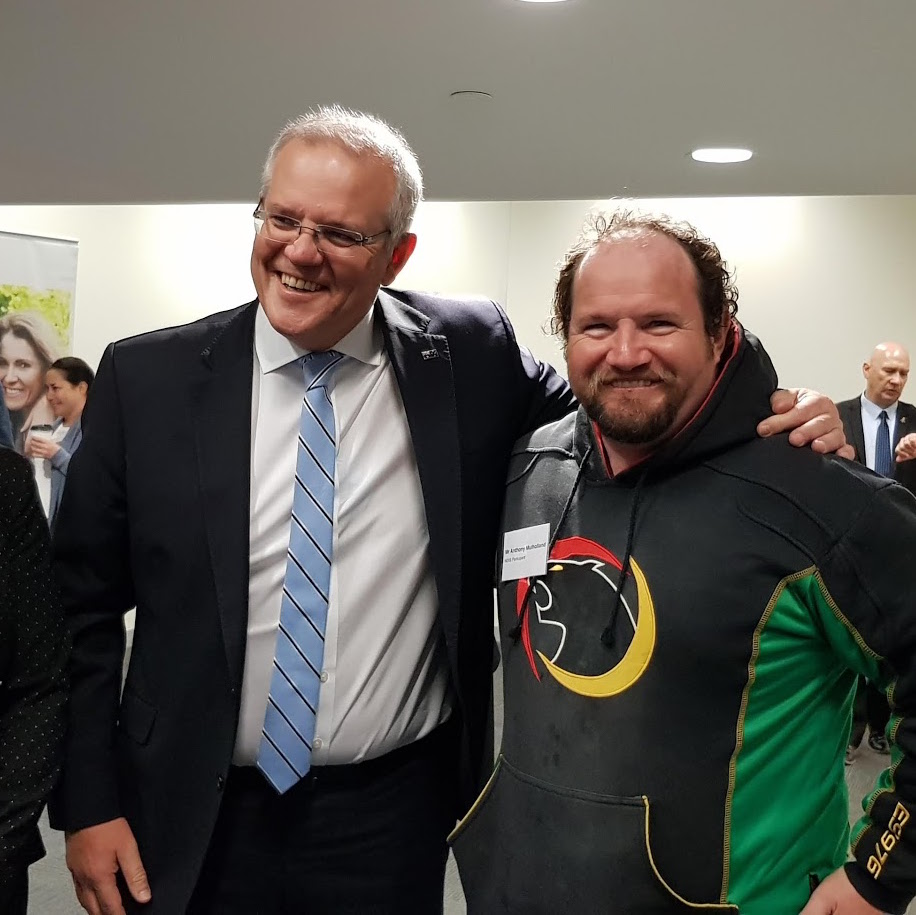 A couple of weeks ago the Prime Minister Scott Morrison and the new Minister for the NDIS Stuart Robert held a meeting with a small group of people with disability and their families in western Sydney.

The meeting in Penrith was the first time the new Minister for the NDIS Stuart Robert heard directly from people with disability about their experiences of the NDIS, and what is really happening on the ground.

We had a chance to speak to Anthony Mulholland, one of the self advocates who attended, about what went on at the closed door meeting.

A lot of the people at the meeting were members of CID, like you. What is CID?

CID is the NSW Council for Intellectual Disability. They are the peak body for people with intellectual disability in NSW to raise issues, and find solutions. Inclusion Australia is the national peak body. CID does systemic advocacy so we do all the big issues.

What does it mean to be a self advocate?

It means a lot to me. It means I can see what life can be like for other people that haven’t experienced life like I have. It also makes me feel happy to see the achievements I’ve achieved to help people. But I’m also very proud of the wonderful work other people do as well.

I was lucky enough last year on International Day of Disability – I actually won the Change Maker award at the National Disability Awards. For all of the change I’ve made for people with disability over the last couple of years. I’m very proud of it.

Can you tell us a bit about the meeting with the Prime Minister?

It was a really good opportunity for us to raise issues with him and see how he can solve the issues.

They wanted to talk about different people with the NDIS. So there was a range of people there. It was really good to see the different issues we faced.

But the problem most of us have is lack of communication.

Also, not being told “oh you can’t be using it there and everywhere”.

Too much restriction on it as well.

So it’s hard to understand what you can and can’t do with your plan?

Oh, negative and positive. I thought more or less they were curious to see why we raised these issues.

Because we [CID] also had another meeting late last year, we had the Parliamentary Inquiry into the NDIS in NSW. And I gave evidence at that as well. We used some of the evidence from that in this meeting as well. 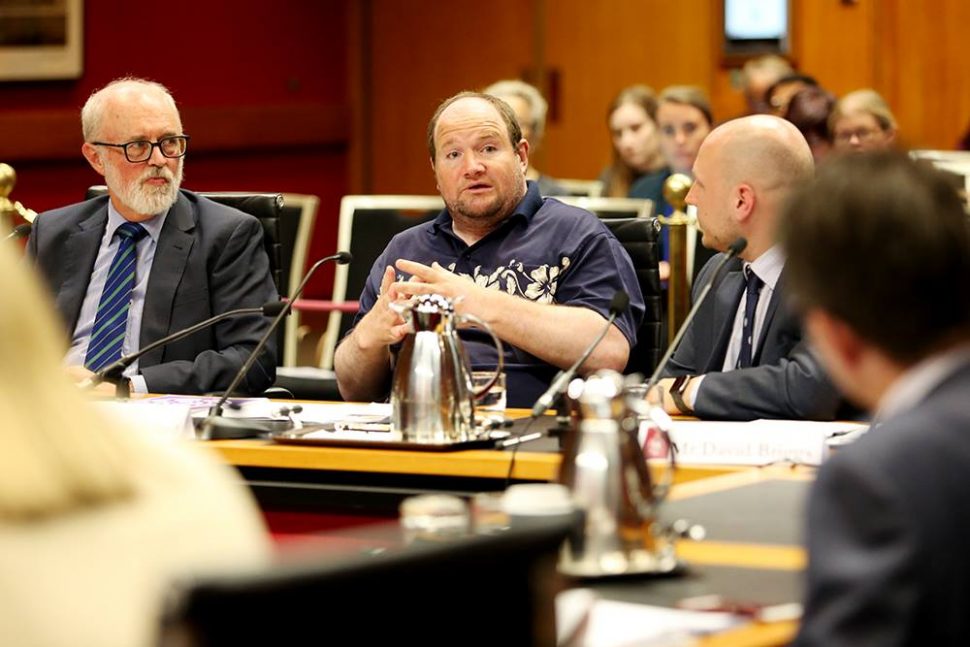 📷 Jim Simpson, Anthony Mulholland, and David Briggs from CID, giving evidence at the NSW Parliamentary Inquiry into the NDIS in 2018. Photo: CID

What were some of the other issues people talked about?

One of the big issues was support coordination. The problem with our local one is that it was not designed for people with each need. And the person you have one year is different the next year. And that makes it very difficult because they don’t know anything about you. So you can’t build a relationship that gets strengthened.

Another big issue we raised was health. Health and the NDIS don’t work together. They didn’t fund swallowing under the NDIS. Health was a very serious one. A major concern for us.

Did you hear the news? The Disability Ministers all came together at the end of June. They made some big announcements about funding health related things in the NDIS – swallowing therapies, and other things. So congratulations! It sounds like your messages got through.

Well that’s a very big victory. Health was really important to us.

Also, there is a lack of resources, a lack of tools that are necessary. A lack of inclusive information – Easy Read. It’s not easy to understand or easy to comprehend.

Another one was transport. Transport’s a very important one for us. It’s our ticket to the world.

I don’t drive a car. So I can’t get around in a car. To get from my house to the station I have to get a bus. So I rely on transport as a key initiative to get around in the community.

Travel training gives people independence. It gives them access to the community like everybody else. I don’t like it when people use cars, because then they are missing out on a lot of opportunities to do it for themselves and gain the confidence – to say “I can do it”.

I love what they can achieve when they learn new skills. I’m proud of what I see people achieving.

So how do you think it went? Do you think they really learned something from being there?

I think we did get all the issues we needed [to talk about]. They did take a lot on board, it’s just whether or not they can make the changes.

Did you give them ideas about any other changes you’d like to see?

Oh yeah, we gave them a lot of ideas.

One of our changes we recommended was more Specialist Support Coordinators for people with intellectual disability.

Where I live in Western Sydney there’s a service that specialises in support coordination for people with intellectual disability. But the other big one around here, they don’t specialise in certain disabilities.

Because I have a hidden disability, often I miss out. I don’t look disabled.

So we were talking about specialist coordinators being one.

Also the other thing we were hoping is that throwing some money into more easy information.

Because the plans are hard to understand. They don’t do them in Easy Read.

The communication is bad.

Another was these unnecessary phone calls [questions in phone planning meetings]. The first question they asked me was “can you stand for more than five minutes?” So I knew what these questions were going to be like. It was ridiculous.

They could have asked good questions on the phone. Like “Have you got any support now? Do you know what the NDIS is about? Do you have any understanding of the NDIS? Do you have a support plan in place? Do you have anybody who supports you at the moment?” And all of these types of things.

So they could have asked all these what they call ‘necessary requirement’ questions before they got into the meeting.

The other unnecessary thing was that they put red tape around.

And when I went through the red tape at the parliamentary inquiry people were shocked that I knew what I was talking about, cos I know what I’m saying.

I know what red tape is. It’s government bureaucracy.

📷 People with disability and families meeting with the government about the NDIS. Photo: CID

What do you hope the PM will do with what everyone spoke about?

One would be getting better coordination and getting equipment.

And other would be better communication. There can be a lot of mix ups.

Also, there’s a lack of training.

Staff training is a very important one. The staff training has to be really good. Because often they don’t have any idea of what a person with disability goes through on a daily basis. What I go through is not what they think we go through. I’d like them to live in our shoes for one day and see what it’s like. Go through the battles what we have to go through.

A lot of the lack of training is down to a lack of resources that are there.

It’s an area where they haven’t put supports around people with intellectual disability. They think it’s easy but it’s not. They have to realise we’re individuals.

I do the staff training at my organisation. When I see the training has helped a lot of people it makes me so proud.

I hope they can go and meet more people and hear what the issues are.

Thanks Anthony – we hope so too.

Read what CID wrote about the meeting on their website – with a great Easy Read version too.