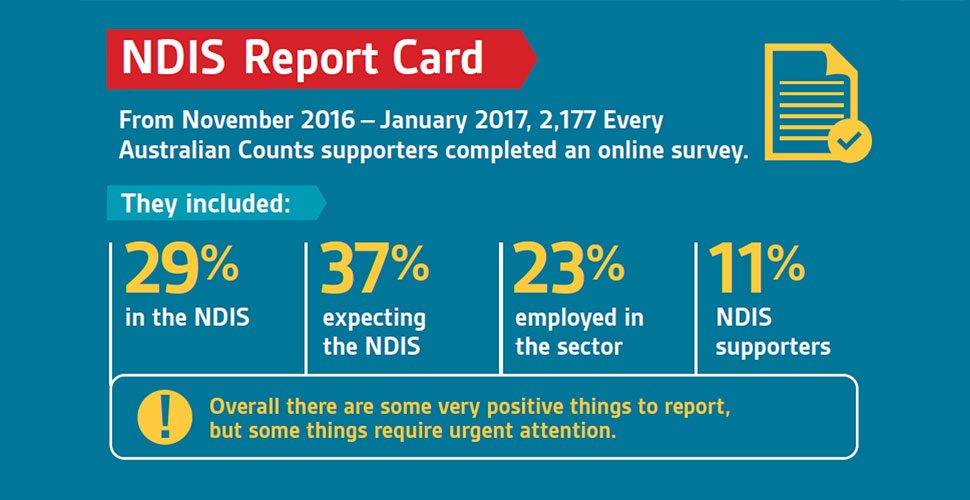 The results are in and we can now release the first NDIS community report card, based on feedback from more than 2,100 Every Australian Counts supporters.

So many people responded it’s taken us a while to properly analyse what they said.

The results are now in! Here’s what you told us:

Overall of those in the NDIS, 71 per cent of people with disability and 61 per cent of parents and carers provided a rating of satisfaction of above for the NDIS.

Some 78 per cent of people with disability and 74 per cent of parents and carers said they have the same level of support or better.

However, almost a quarter of people said they are worse off. This is a serious issue that the NDIA must look at closely. There are too many people who consider themselves worse off, and many say they don’t yet know because it is too early to say.

Another red flag is the number of people – around 50 per cent – who believe they have enough choice and control when navigating the NDIS. That means there are plenty who don’t.

The NDIS is only just getting underway in many areas of Australia with more people transitioning to the scheme every day.

There’s great potential for many of the issues identified in the survey to improve over time as the roll out continues – but they need serious attention.

The NDIS must be delivered effectively and sustainably to realise the enormous potential and long term benefits for every Australian who needs it.

Every Australian Counts is sending the NDIS Report Card to the NDIA and disability ministers so they can see how the community thinks the NDIS is tracking in its first year. We’ll keep you posted with their response.