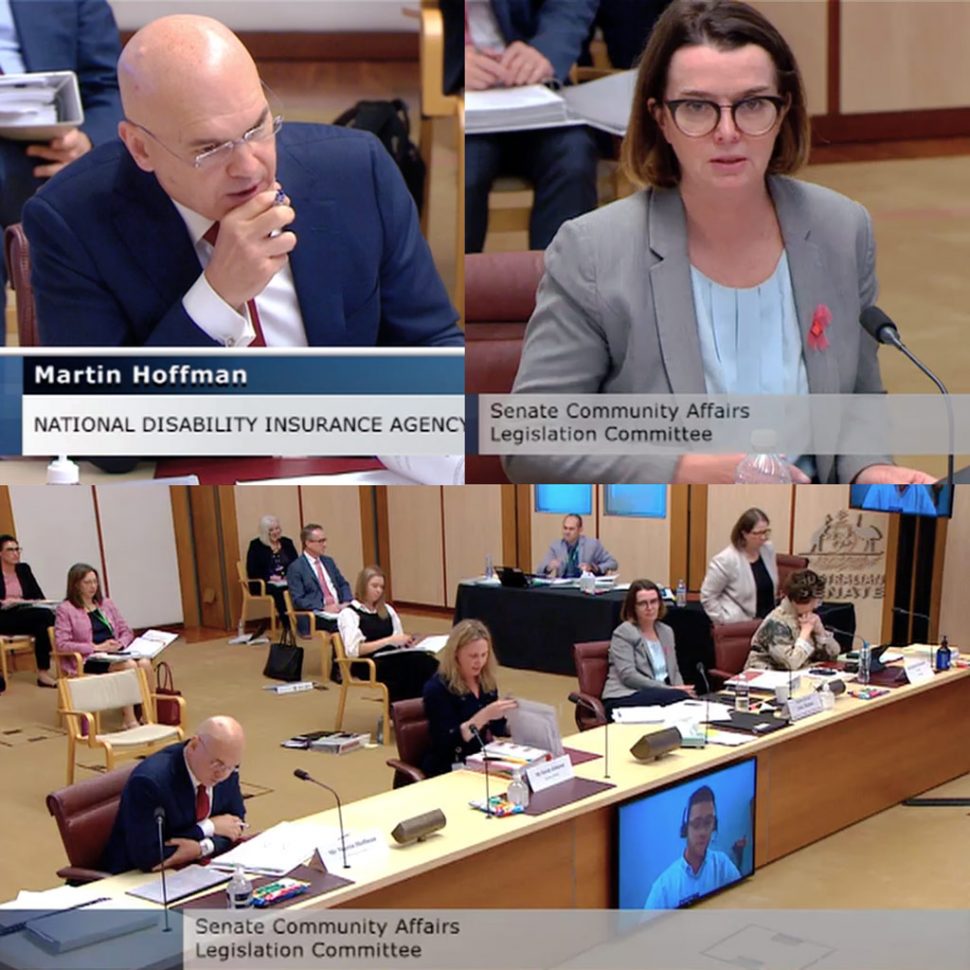 But even if you don’t have the livestream from Parliament bookmarked on your computer (or is that just us?), Estimates is relevant to everyone. It’s a really important part of our democratic process.

Because it’s the time when Senators get to ask questions about what the government is up to – and what it all means for ordinary folks in Australia.

And yesterday it was the National Disability Insurance Agency and the NDIS Quality and Safeguards Commission in the hot seat.

And a pretty uncomfortable seat it was.

So what did we learn?

There were four hours of testimony from the NDIA, the NDIS Quality and Safeguards Commission and the Department of Social Services. So there was a lot to take in.

But four big things jumped out straight away …

One way to clear the backlogs …

Well yesterday we found out one of the ways those backlogs have been cleared. The senators asked the NDIA about something called the “fast pathway”.

It appears the fast pathway was a way of sorting out internal reviews. Both “reviews of reviewable decisions” (that is always such a mouthful) or reviews as a result of a change of circumstances.

It seems the NDIA created a “decision tree” for peeps in the internal review team. “Simple” cases got waved through quickly while more complex got looked at more closely. And asked for more evidence.

This fast pathway kicked off at the beginning of this year and ran through until about the middle of the year.

We don’t know much else about this pathway because the NDIA seemed to have been caught off guard by the appearance of one of their own documents outlining what it was and how it worked. And as a result they took most of the questions about the pathway on notice (taking a question on notice is estimates-speak for “we don’t know or don’t want to say so we will get back to you”).

So the questions the Senators asked were – did people who were classified as simple just get whatever they asked for? Rubber stamped and flicked through? While everyone else had to cough up more evidence and argue for what they needed?

The NDIA said no – but did not give any further detail. So we will need to see the answers to the questions on notice to get the answer to that one.

NDIS Quality and Safeguards Commissioner Graeme Head was questioned about the extra $90 million or so the Commission received in the Budget announced in October.

It appears that most of that money will be used to employ about 100 more staff. And that recruitment for these staff is already happening.

But only 5 or 6 ongoing positions will be added to the investigations team.

“To be quite frank I find it difficult to understand how when one of your core functions is investigating complaints that you decide to dedicate less than 10% of your staff to it” Senator Steele-John to #NDIS Quality and Quality Safeguards Commission. #NDISMakeItWork #Estimates

These jobs will spread out across the country. But none will be added to the team in South Australia. Nada, zero, zilch to South Australia – were Ann Marie Smith died in such a tragic and horrific way.

Fair to say that the Senators weren’t all that impressed with what they heard yesterday. Reckon that won’t be the last word on that one. So again, stay tuned.

That’s a fair chunk of change.

A number of the Senators asked questions about the NDIA’s plans to introduce compulsory assessments for all new and existing NDIS participants next year.

In particular, there were lots of questions about what was and was not tested in the very first pilot of this new assessment process held back at the end of 2018.

The NDIA told the committee they had “evaluated” the first pilot. Their version of an evaluation consisted of a survey given to the volunteers who took part as well as an analysis of the results of the assessments.

But there was no detail given as to what that analysis involved or what it actually showed. Nor was there any detail about the survey. When Senators asked for a copy of what participants were asked in the survey, the NDIA said they would have to take the question on notice.

But what they did say was that only 145 of the 513 participants filled out the survey anyway.

NDIA tell #Estimates that of the 512 people who took part in the pilot, only 145 completed a survey about their experience. #NDIS #NDISMakeItWork

So only 28% of the people who volunteered for the pilot said – or were willing to say – what they thought about the whole thing.

And when the Senators suggested that was a pretty low response rate, the NDIA replied that they were pretty happy with it. In fact, they would have accepted an even lower rate.

A second much bigger trial is just getting underway now. More than 4,000 existing participants are going to be asked to take part in this one. And again they will be surveyed to get their thoughts on how the whole thing did or didn’t work for them.

There was much bureaucratic gobbledegook and nifty sidestepping during this whole exchange. But it basically came down to – we are going ahead regardless of what the feedback is.

And we don’t need a question on notice to work that one out.

Translation: This is going ahead. Full steam ahead. #NDIS #NDISMakeItWork https://t.co/CxT4LaKaI6

Here’s our summary of what the report about the first pilot actually revealed.

Putting NDIS assessments to the test – Every Australian Counts

And here is some media coverage of yesterday’s hearing: