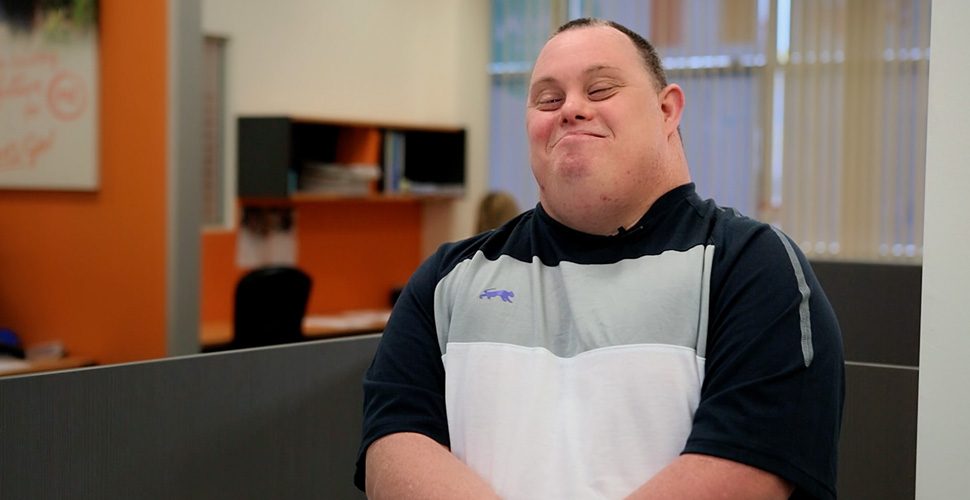 Leigh Creighton shared his story with Every Australian Counts just as he embarked on his NDIS journey three years ago. With the full NDIS roll out starting this Friday in many part of Australia we caught up with Leigh to see how it’s working out.

Leigh’s story documented his planning and preparation for the NDIS. When we caught up with him again late last week he was in his usual high spirits – having spent the day sharing his story in Brisbane for the Endeavour Foundation.

Leigh has now been part of the NDIS Hunter trial for three years. To say his enthusiasm is infectious is an understatement!

Leigh says the NDIS has allowed him to realise his dreams of living independently and becoming and advocate for people with an intellectual disability.

He’s just moved into a new home. NDIS funded support services helped him choose one he felt was suitable and manageable.

The NDIS also funds support workers three days a week who help him with day to day tasks, provide advice and keep him on track with his health and fitness. They even join him night clubbing every now and then (“to give mum peace of mind I’ll be ok”).

Leigh has become a member of the NSW Disability Council, and he is a peer mentor with projectABLE and House with No Steps, speaking to people every day about how they can achieve their goals.

His next big goals are to write a book and work for the United Nations advocating for people with disability worldwide. It’s a dream Leigh is absolutely confident he can achieve “one step at a time”.

The NDIS has enabled Leigh to live the life he chooses.

“Every person with disability has a right to live independently, to fall in love, get married and have kids,” Leigh told Every Australian Counts.

“They’re every day choices that we should be able to make for ourselves.”

After three years in the Hunter trial, what’s his number one tip for people who are starting the NDIS from July?

“When I first started the NDIS it took me a whole year to get into it. Make sure you know in your head exactly what you want and then write it down on paper. Make sure you also take a supporter with you, someone who knows you, so they can sit next to you and look what you’ve done make sure you don’t forget anything.”

Leigh’s second tip for getting the most out of the NDIS?

“Don’t be afraid to ask for help!”

That could be from the planners – if you’re not sure what they’re asking you, make sure they repeat it. If you need help thinking about what goals you’d like to set – and what you need to reach them. Ask someone who knows you and cares about you. If you the paperwork is confusing, ask someone to fill it out with you.

And while the NDIS has, in Leigh’s words, helped make his life better, he says that like anything it’s not perfect and can be improved as it rolls out over the next three years.

Leigh’s top advice for the NDIA?

“Focus on people, not paperwork!”