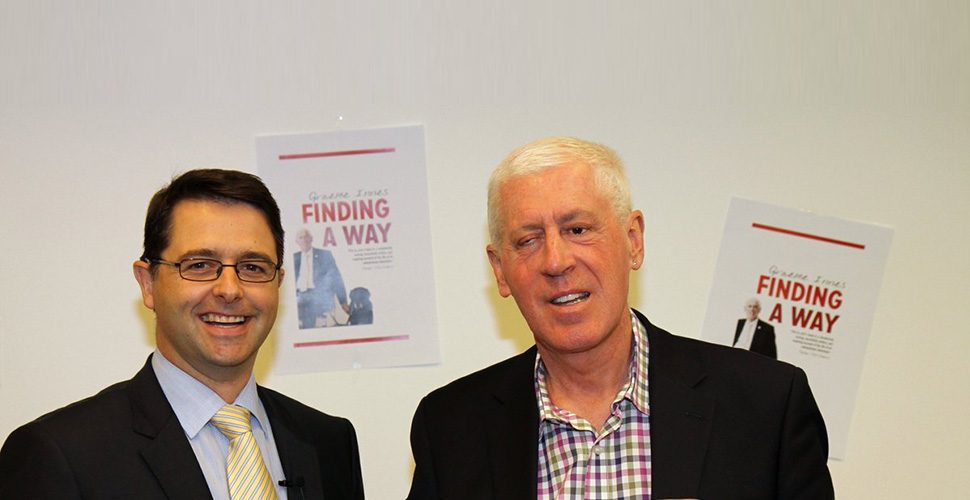 Disability discrimination commissioners past and present came together this week in a compelling interview supporting the NDIS.

Current Disability Discrimination Commissioner Alastair McEwin and his predecessor Graeme Innes joined Wendy Harmer on ABC Radio Sydney the morning after the NDIS came under the spotlight on Q&A.

The interview began with a discussion about the government’s decision to tie funding for the NDIS to welfare cuts through a new “omnibus savings bill”.

And while both commissioners were reasonably happy with George Brandis’ Q&A statement that the government remains committed to the full f2unding of the NDIS, they were not so happy about it being tied to welfare cuts.

“It is unacceptable to play politics with the NDIS,” Graeme Innes

In response to more questioning about funding and former NDIA chair Bruce Bonyhady’s comment that the NDIS should be treated like any other item of expenditure, like submarines, Mr Innes said:

Both commissioners are disappointed that disability is too often an afterthought and people with disability do not have enough of a voice in decisions made about them.

Q&A itself came under fire itself from Mr Innes:

“I started a hashtag #notonQandA because people with disabilities who make up 20% of the population are not appearing on Q&A. I think it was great that Q&A gave Alastair, as our Disability Discrimination Commissioner, the chance to ask a question but why isn’t he appearing on the panel?”

And it was a good question according to viewers.

What they said about the NDIS

The NDIS makes economic sense, and more importantly will give people with disability the choice and control over their lives that other Australians take for granted.

“For many of us we will have the choice and control of the services we receive…For many people who haven’t been receiving services at all they will get more than one or two showers a week, they’ll be able to leave their homes with appropriate support and many will return to the employment market.” Graeme Innes

“I would love to see the government just commit to fully funding it as it should be. Now I understand we are operating in a constrained budget environment…People with disability want to pay taxes like anyone else so if we have the opportunity through the NDIS to get to employment and also spend money in cafes and restaurants and socialising so the return on investment will be there – I just wish the government would look at the bigger picture.” Alistair McEwan

However there’s still a lot of work to do to let people know what the NDIS is and how it works – particularly in Aboriginal communities and people from Non-English Speaking backgrounds.

“I would also say that people with disability themselves have never really had this full choice and control. We’ve been oppressed for many, many years. So they too need to learn how to advocate for themselves in the best way possible.” Alastair McEwin

There’s still a way to go in the implementation of the NDIS but in the words of Mr Innes:

“This is a new scheme. It’s like Medicare was in the 70’s and it’s taking some time to roll out. There’s no doubt there are some glitches. But the overall support for it by participants is still 85 to 90 per cent so it’s doing well.”

Every Australian Counts has requested a transcript of this interview from ABC Radio Sydney.

You can listen to the full interview online here.