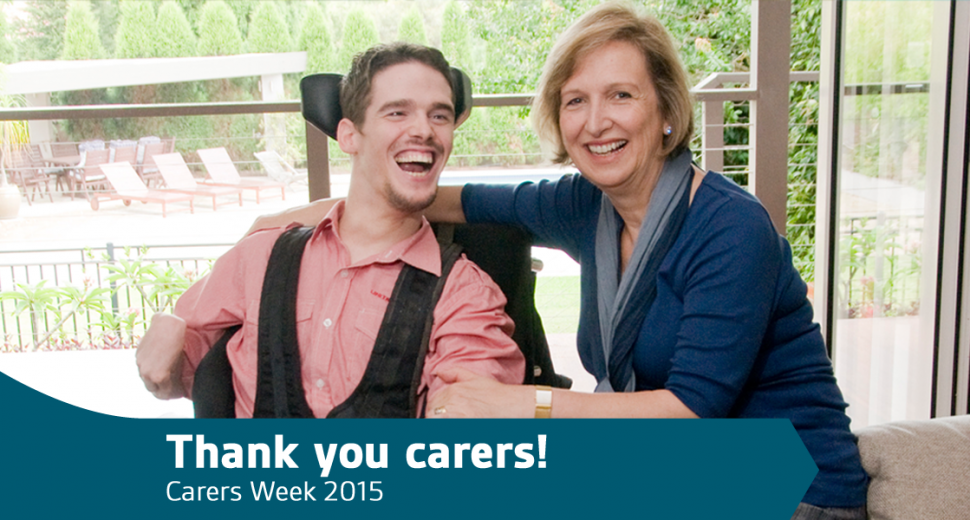 There are 2.86 million unpaid carers in Australia, who will provide an estimated $60.3 billion of care in 2015. This National Carers Week (October 11-17) we talk to Carers Australia CEO, Ara Cresswell, about how carers fare as the NDIS begins to roll out.

Almost a year ago now, Ara raised some concerns with Every Australian Counts about the role carers would have in the NDIS, particularly their involvement in the planning process, and the degree to which NDIS packages also support carers.

Twelve months down the track and Ara says the news from the trial sites is encouraging.

“Overall, the carers we have been speaking to in NDIS trial sites have been pretty positive about their involvement in the NDIS planning process,” Ara said.

“Most feel that their concerns have been listened to and that the National Disability Insurance Agency (NDIA), which co-ordinates the scheme, understands the important role they play in supporting the person with disability.

“The NDIS can be daunting for some carers though, and many need assistance in helping the person they care for to prepare for the planning meeting.

“Carers can also feel a lot of pressure to ‘get things right’ the first time they meet with the NDIA.

“In the old system there often wasn’t much of an opportunity to review support plans, so for those transitioning to the NDIS there can be a fear that they will miss out something essential.

“That’s why the NDIS review processes are really important. Often carers and people with disability aren’t aware of all the supports they were previously receiving outside the NDIS. Therefore the first NDIS plan they receive can sometimes need some tweaking.

“It’s a learning process for everyone involved discovering all the supports that are needed, identifying new ways to improve the independence of the person with disability.”

Carers Australia has spent the last year talking to family and friend carers at trial sites around the country to find out how the NDIS has worked for them, and what may need to work better.

It has also just run a national online survey, Carers and the NDIS, for carers who support someone who has an NDIS support plan about their experiences.

While it’s too early to assess the survey results, Ara says it’s clear from talking to carers about the NDIS that it’s important that they have the right information.

“Many carers tell us that they simply ‘don’t know what they don’t know’,” she says.

“When first applying for the NDIS people can feel inundated with information.

“While it is really important that carers and people with disability are provided with enough information to prepare for the NDIS, it’s also crucial that the information is clear and easily understandable to everyone, not just those who have been negotiating the sector for some years.

“Talking to others who have already been through the system can also be really valuable to carers.”

Carers Australia is helping the organisation that co-ordinates the NDIS to develop helpful resources, discussion forums and webinars to support families and carers as they join the scheme.

It is also training Peer Conversation Partners, so that carers who have not yet navigated the NDIS system can benefit from direct contact with carers who have already successfully supported the person they care for to transition to the NDIS and are happy to share their experiences and hints.

“The NDIS is a huge step forward for people with disability, but it will also have a huge impact on the lives of carers and their families,” says Ara.

“We need to make sure that outcomes for carers are also being measured.

“Many assumptions have been made about the extent to which carers’ need for support will be reduced by the NDIS. If this does eventuate it will be a very welcome outcome, but we need to see the proof. ”

You can show you support Australia’s carers by taking the National Carers Week Pledge.

Thank you to every carer out there. Australia couldn’t do it without you!

While the aim of the NDIS is to support people with disability, the NDIS support package will also take into account the ability of a carer to care and keep up the level of care.

During the planning process the NDIA will engage with carers to ensure their circumstances are taken into account. Carers can choose to prepare a written statement and submit this to the NDIA, or they can discuss their situation with the NDIA in person. Both will be recorded as a Carer Statement on the participant’s record and can be revisited at review.

NDIS funding can support a person with disability in becoming more independent and could help reduce the amount of care a carer needs to provide.

It can also provide support through training, therapy, transition planning, co-ordination, and assistance with care – although this is not formally known as “respite”.

For more information about the NDIS and how it can support carers go to http://www.carersaustralia.com.au/ndis-and-carers/carers-in-the-ndis/#carersupports

Supports available to carers outside of the NDIS

There are a range of supports available to carers that are not part of the NDIS, including respite support, counseling, education and training, peer support and advocacy. For information about what supports and services are available in your area, call the National Carer Advisory Line on 1800 242 636