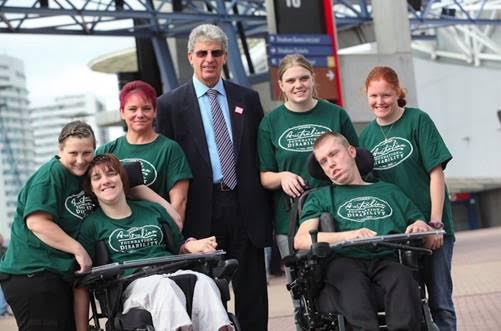 Tim was a key driver of the campaign for the NDIS as the Chair of the Every Australian Counts campaign steering committee. In this role he raised funds and used his many media and business contacts to promote the NDIS.

As a strong supporter of choice, control and independence for Australians living with disability, he was a passionate supporter of the NDIS from the very beginning.

Not only did Tim work tirelessly to support the campaign in its crucial first three years, he remained a mentor and advisor to the campaign – in spite of his serious health problems.

Tim used his extensive and impressive network of friends and contacts to influence media and political opinion to support Every Australian Counts. On more than one occasion Tim surprised our campaigners with his ability to exploit a business contact or community association to the advantage of the NDIS.

Tim was not afraid of the hard work of campaigning. He was always there with his sleeves rolled up when the hard work of direct canvassing, fundraising and event organization was the order of the day.

Every Australian Counts is saddened by Tim’s death but heartened to know that he lived to see a substantial part of his vision fulfilled.

We offer our condolences to Tim’s loving family and wide circle of friends.