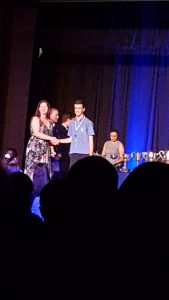 My Autistic son’s life had been completely transformed by the NDIS. When he started with his OT in home sessions, he had a severely limited diet of 5-10 foods due to sensory difficulties. After less than a year he is now eating well over 60 foods, but it is ever increasing because he has become an adventurous eater! We never thought it would be possible, and we certainly couldn’t have happened without NDIS funding which provided the weekly sessions with his OT. Now, his grades have improved dramatically, his emotional outbursts have gone from daily to almost non-existent, because his brain is able to function properly with proper nutrition!

He’s even eating and loving Japanese food and will be going to Japan with school next year. I never expected this to be an option for him with his limited diet!

We have had other successes in supported soccer and community access which have been great. However, some of our providers have not been paid because of the gap between invoicing and the last year’s plan expiring which has been a major hassle for me to try and sort out and leaves them waiting months for payment. Having to know what services he will need a year ahead in order to get them into his plan is also almost impossible to anticipate.