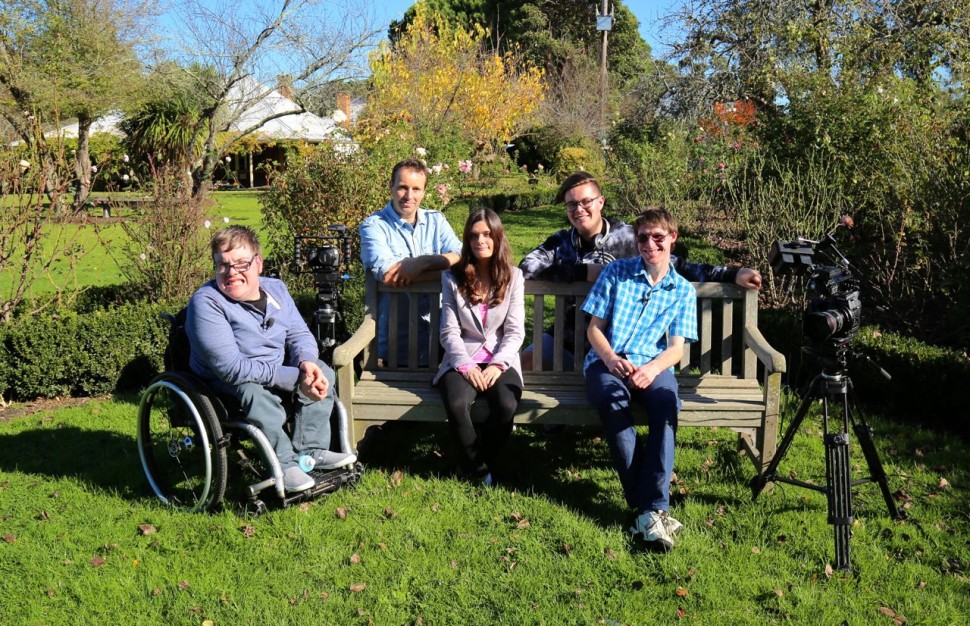 On Monday, 13 July a new television show made by young people with disability at Dandenong based service provider Wallara will screen on Channel 31. It’s an exciting new way of sharing the stories of people with disability and for the people behind the new channel, it’s only the beginning. Every Australian Counts spoke to Wallara’s Digital Communications Manager, Jay Pinkster to find out more.

So Jay, what is WallaraTV?

What’s unique about WallaraTV is the way we tell these stories. One of our core production values is to encourage the person to tell their own story wherever possible. It’s often very challenging and usually involves doing multiple takes.

Why use video or television to do that?

Wallara supports 500 people with intellectual disabilities and the majority these people have limited literacy skills. When you go to their houses they own more DVD’s than books, so we wanted to communicate their stories in a format that was accessible to them.

Once we had a produced a few videos we built a Youtube channel and then approached Channel 31 about doing a 30 minute television show. They were really supportive and saw the importance of giving people with disabilities a platform to share their stories.

Do you have your own studio at Wallara?

Yes, we have a small studio at our headquarters in Dandenong, but where-ever possible I like to film people in their own communities. One of the things we are trying to communicate is what good inclusion looks like, so I think it’s important to get out and about.

Who puts together the stories?

I oversee the production and distribution of our videos. We are never short of stories at Wallara the support staff do an amazing job of coaching people to achieve their goals. Mostly we look at the stories that get us excited.

Whats in the latest episode of WallaraTV?

Each WallaraTV Show has a collection of short stories from our YouTube channel and presented by people with disabilities.

We have some great stories in this latest show. We have a story about a gentleman with autism who is obsessed with Scoobie Doo so his support worker manages to get him a ride on the Mystery Machine. We have another story about a group of Year 12 students and collaborate with some of our people at Wallera on a play. The effect it had on the Year 12 students by improving their leadership skills and helping them grow in confidence is amazing.

Tell us about this show’s hosts, Sam, Hayden and Ben

Sam, Hayden and Ben are part of Wallara’s Ambassadors program.   They are trained in public speaking and self-advocacy and are encouraged to take a leadership role with in the Wallara community. Part of the Ambassadors program is speaking at corporate events, fundraisers and leading school tours.

Sam would like to pursue a career in the film industry and Hayden enjoys being on stage. Apparently he does a great Dolly Parton impersonation but I haven’t seen it yet!

What do your viewers say?

I had a mother in Queensland write to me saying that one of our videos had given her hope about what her teenage daughter might be able to go on to achieve. That’s hard to beat.

No! We’re really keen to here from people in other states or other places that have stories to tell. Wallara TV started as a trial with a few videos and has snowballed. Our goal now is to grow much bigger and take it national so it’s a platform and showcase for inspiring stories about inclusion and support.

And finally, tell us about Wallara.

Wallara is a beautiful community to be part of. We support 500 people with different abilities on 30 sites. Every day stories come in about someone achieving their goals or doing something significant. I can’t imagine working anywhere better.

WallaraTV’s 30-minute television special will be hosted by Ben, Sam and Hayden from Sages Cottage– a 38 hectare community farm on Victoria’s Mornington Peninsula.

It will air on Channel 31 at 6.30pm on Monday, 13 July. For people outside of Melbourne and Geelong who can’t access Channel 31, the full WallaraTV show will be uploaded on the WallaraTV YouTube channel with subtitles.

You can preview next Monday’s show here.