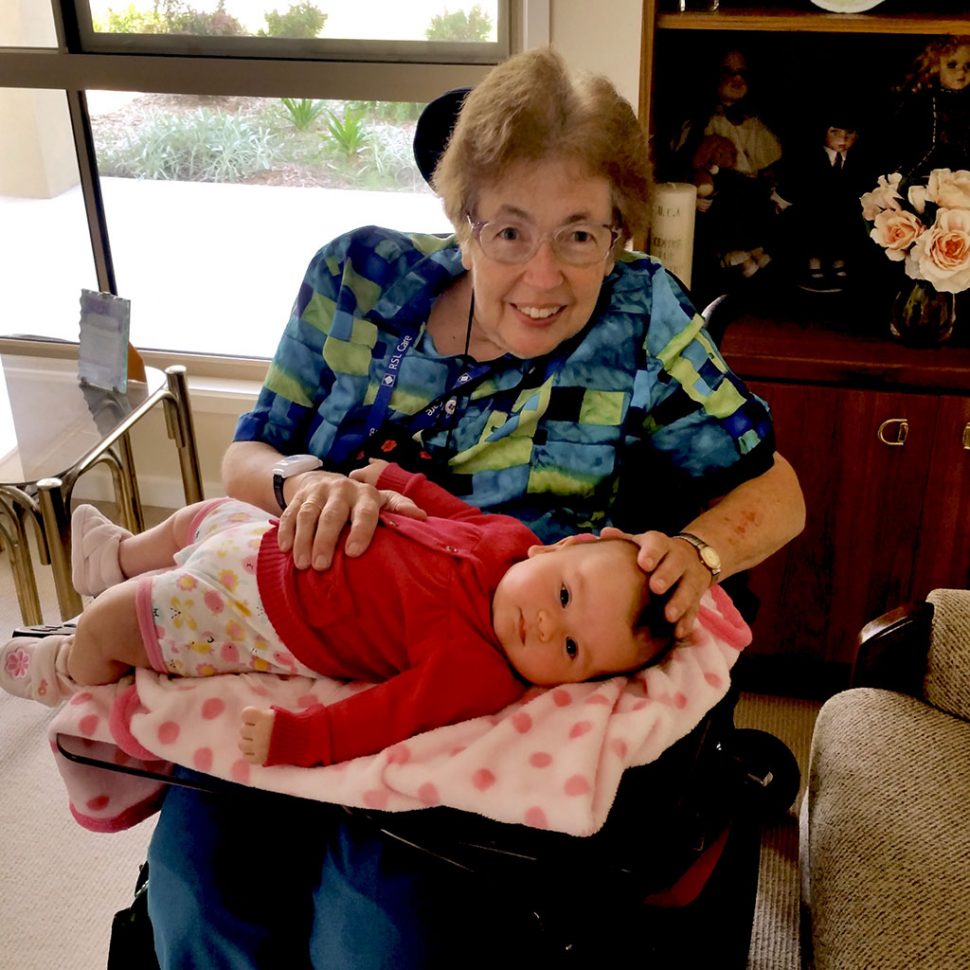 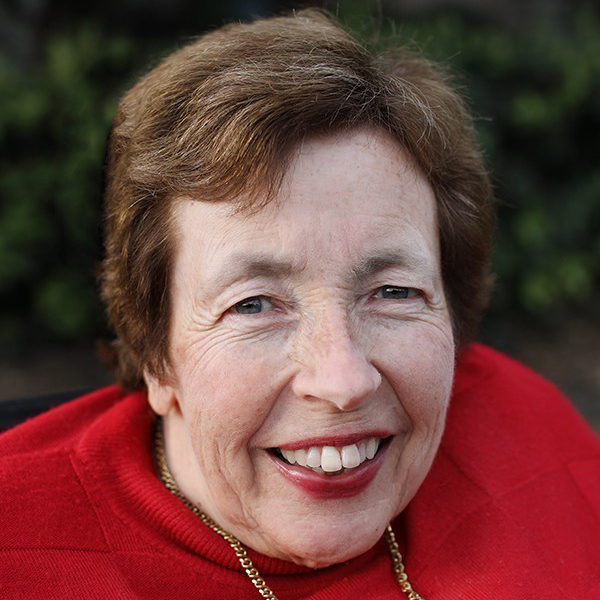 Heather Coombes was one of the panelists at our Make it Work forum in Redlands Queensland. She has self managed her NDIS plan right from the start – and has some useful advice for anyone who might be considering it.

I was over the moon when the National Disability Insurance Scheme (NDIS) was introduced. I had great hopes that horizons for people with disability like me could be expanded. My resilience was tested though, in the process of applying for the Scheme in NSW. Providing copious amounts of written evidence of who I was and the validity of my disability took much time and energy. In addition to reports from my GP regarding my condition, I fronted up to a Skype interview by a government appointed doctor. However, once I negotiated the many hurdles, I was finally accepted.

Eventually, I was allocated a planner who came to my house to discuss my goals. Her skill, warm personal approach and lived experience of being in a wheelchair were second to none. A plan was devised and accepted. I wanted to try also being self-managed to increase my sense of self direction in my daily living, recreational and therapy life.

Around this time, I made the decision to move, accompanied by my mother, from NSW to Queensland to enjoy closer family support. A question arose in my mind. Would I have to surrender my hard-won NDIS acceptance when I moved to the northern state, where the NDIS had not yet rolled out?

The official answer: No, I could remain on the scheme with the proviso I self-managed my plan. Yippee!

Moving to Queensland, while advantageous to us, was very stressful, particularly when trying to establish appropriate physical modifications in my new home and forming new relationships with unknown medical and therapy personnel. It was not an easy transition initially, made more difficult by complicating health issues.

I remained on my self-managed NDIS plan, maintaining contact with the National Disability Insurance Agency call centre for queries or concerns. The call centre staff members were approachable and tried to be helpful. Sometimes they did not know the answers because they were on a learning curve too. The call wait times seemed to get longer as time progressed.

When my first plan expired in my new-found state, I wondered how I would be transitioned to a new plan, given Queensland was still in the process of rolling out the scheme. I reminded the call centre staff of my situation who passed on my concerns. Eventually, the Logan Regional Office in Queensland rang me to discuss my situation. I was fortunate to be connected with an understanding staff member who helped me craft a new plan over the phone. It was then approved by someone higher in the structure. I was more than satisfied with it.

My accountability obligations as a self-managed participant kept me busy. Keeping receipts from therapists and other service providers and organising them in case I was audited, was a task I was learning on the job. I had to navigate service agreements and consent forms from each provider. The information for self-managed clients was certainly available on the NDIA website. Although I am moderately computer literate, I found the responsibility of “doing things right” a bit overwhelming.

I decided on the policy of paying my providers first. I hate being in debt. I then began the process of reimbursement from the NDIS to my pre-determined bank account. The online requirements through the MyGov/NDIS portal are fairly simple on the whole, although I can think of ways of streamlining the procedure. Simple, though, does not prevent the feelings of tedium which occasionally wash over me as I process the claims. I would argue too, that though the process is understandable, one has to keep one’s wits. Accuracy is important.

One of the mistakes I made early on in the journey was to accumulate unprocessed receipts until a few days before the expiry of an existing plan. The strain to complete the necessary data entry was sizeable, but totally avoidable. Nowadays, I try to process the paperwork bit by bit. My blood pressure and I are now friends again.

In my initial ignorant attempts to administer my plan, I arranged for the reimbursements to be placed in my day to day living account. However a government official advised me later that designating a special NDIS account within my personal banking system was a much better idea. It is tidier and easier to keep track of entries. It is also simpler to identify which of your income is taxed and which is not (reimbursements from NDIA are not taxed). To make payment of providers easier, I have a debit card attached to my NDIS account.

As I learned on the job, I felt alone. Eventually, as the scheme rolled out further in Queensland, I was introduced through one of my service providers to a new Local Area Co-ordinator (LAC) in my region. My connection with her has proved most beneficial. I have email and phone contact with this compassionate person and I am a part of her regular caseload. What is even more advantageous is that she does regular home visits, during which I can ask questions or discuss problems relating to the scheme. Nothing tops face to face contact. She also has helped me transition to a new plan. The LAC has made suggestions to accommodate my changing physical needs and made provision for these financially. I realise that my positive experience in this regard is not universal, but I consider myself blessed.

I have not yet experienced a government audit of how my self-managed plan is administered, so I cannot yet report on that. Here’s hoping I get a tick of approval!

Suggestions I would make to improve the NDIS 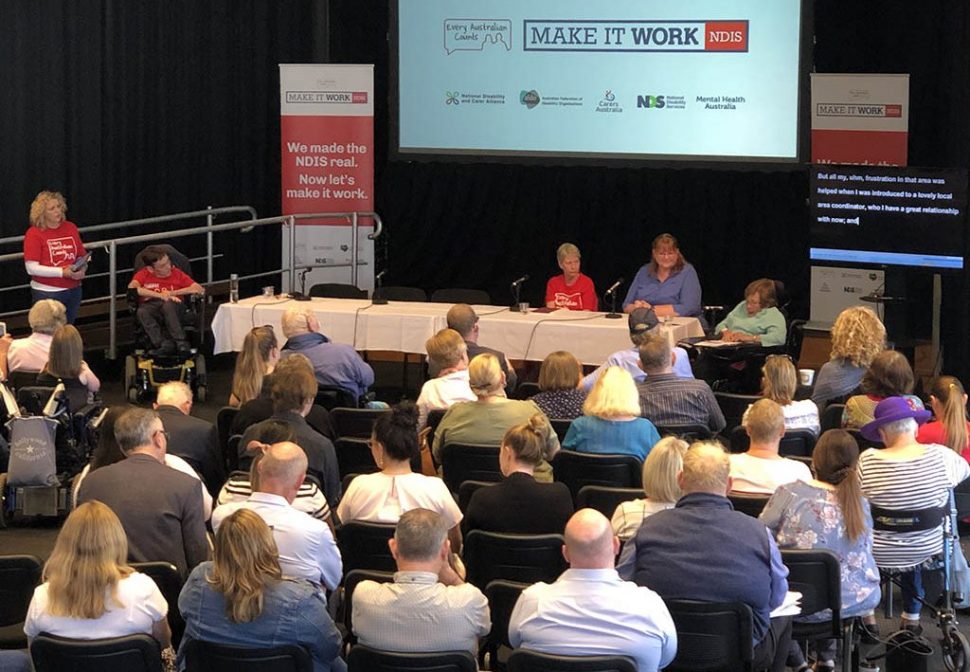 📷 Heather was a panellist at our Redlands Make it Work forum in 2019.

Final observations on the NDIS and self-management

Self-management does require a moderate level of computer literacy. I am by no means an expert in IT, but some competence is vital. Concentration, commitment and ability to relate easily with your service providers are necessary qualities. Patience in waiting for service from over-worked service providers is also needed. Since the introduction of the NDIS, the demand for their skills has increased phenomenally.

Recently, I have found out from an Every Australian Counts forum that if you find, after trying the self-managing process, you want to delegate management of your plan to others, a review is required. Reviews, I am told, are time-consuming, but at least the option for change is there.

Having said this, I still say that the NDIS is great and has relieved me from significant financial pressure as I meet my changing needs. It has enabled me to stay in my own home for longer. It has ensured access to a wide range of services too.  The beauty of self-managing is that there is the potential to increase your sense of self-direction and choice in the meeting of your goals. It is also within your reach to occasionally speed up the provision of services, because you are not at the mercy of waiting for at least some necessary paperwork in another’s in-tray.

Let’s make sure that NDIS and the capacity to self-manage is here to stay!

About Heather:
‍Heather is a retired 65-year-old woman with cerebral palsy, currently living in South-East Queensland in an independent living unit as part of a retirement community. She uses a motorised wheelchair, exercising with a walking frame under supervision. Following tertiary education, in her working life she was a librarian and then an aged care chaplain with the Uniting Church in Australia. She loves being close to family, being an aunt and great aunt. Author of a memoir and practical handbook “Marathon Wheeler: Living with Physical Disability” (Bloomington, Indiana: Westbow, 2016), she enjoys being a disability educator. Further writing projects are underway. She is a contributor to an anthology of stories recently released as a book on Amazon: “Don’t Quit: Stories of Perseverance, Courage and Faith”.  Swimming and reading are two of her favourite pastimes.

A big thank you to Heather and WWDA for letting us share Heather’s story here – it originally appeared on Women With Disabilities Australia’s oursite.

You can learn more about Heather’s story and order a copy of her book, Marathon Wheeler from Heather’s website.