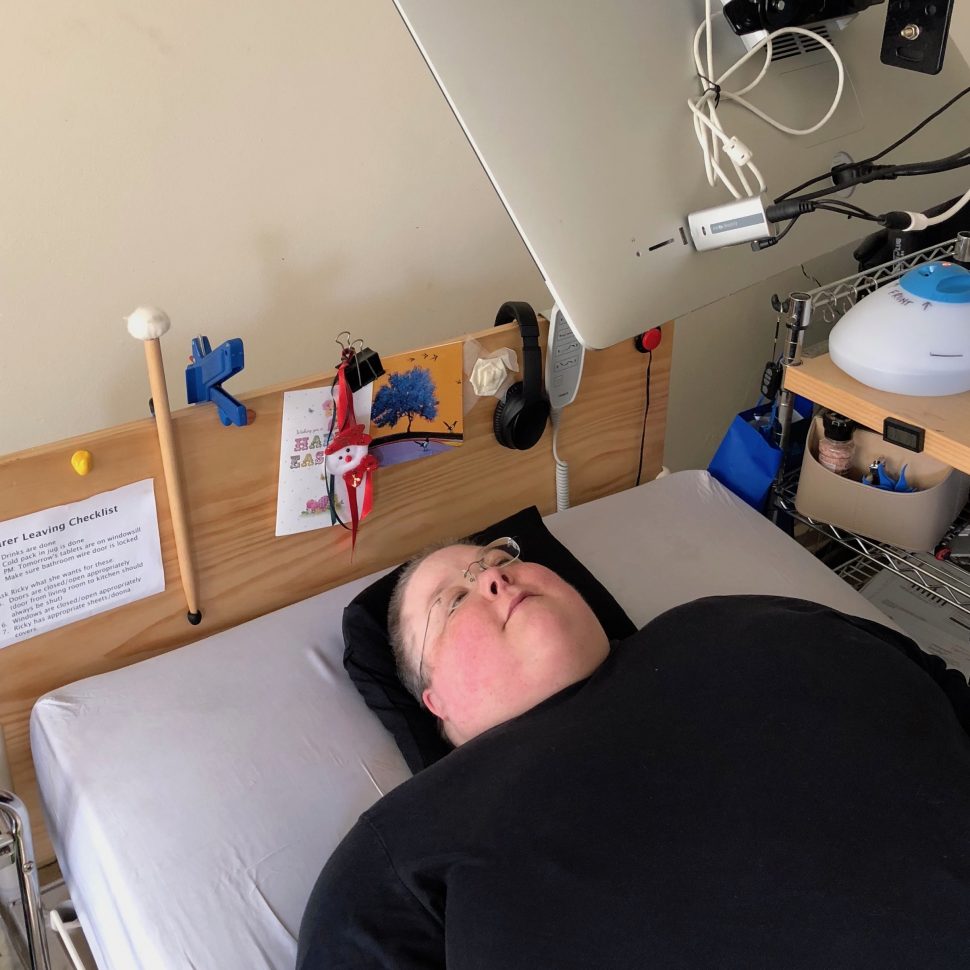 How is the NDIS working for people who can’t leave their homes?

We know that there are lots of people who are really struggling to get the support they need from the NDIS.

There are particular groups who are really missing out – and one of those groups are people who are either bedbound or housebound.

Last year our friend and Every Australian Counts supporter Ricky Buchanan published a fantastic report called “Just Invisible” Medical Access Issues For Homebound/Bedridden Persons. The report looked at the challenges people who are homebound or bedridden face when trying to access health care and disability support schemes such as the NDIS.

We had a chat with Ricky to find out just what inspired her to write the report, and what she thinks should change to make health care and disability support services accessible to everyone.

Before we get started can you tell us a little bit about yourself?

I’m a middle-aged disabled women from Melbourne who got completely fed up at how the medical and disability establishments failed to support people who are homebound or bedridden.

Just a note before I go on – I know that everybody around here understands that “wheelchair bound” is not appropriate language because it’s inaccurate and also implies wheelchairs are awful when actually they are fantastic freedom machines. That’s true and it’s great but don’t let it pour over to making you feel afraid of phrases like “homebound” and “bedridden”. Two reasons here – firstly there’s nothing fantastically enabling about being stuck at home or stuck in bed, it just sucks … it’s not freeing or enabling like getting a wheelchair is.

But most importantly “homebound” and “bedridden” (or some folk prefer “housebound” or “bedbound”) – these are the ONLY words we have to describe our situation. You don’t get to take away the only words people have to describe themselves ever in any situation. You especially don’t take those words away when you’re already a tiny minority within a minority who are mostly erased by society anyway.

So yes, I’m homebound and bedridden. It’s OK to say it. It’s my life.

You have written a fantastic report about the barriers facing people who are trying to access health care but who are unable to leave their homes or their beds. Can you tell us a bit about the report and what you found?

Even I was shocked at how bad things are actually. I’m a very good self-advocate and I’ve been hooked in with the disability support system for several decades now – most people I talked to are doing even worse than I am.

What I found is that people who are homebound and bedridden are overwhelmingly locked out of the entire medical system – very little access to GPs, no access to outpatient specialists, virtually no access to allied health, enormous problems accessing both inpatient and outpatient hospital systems.

Over and over people told me about services not understanding how anybody could live it the community and be homebound or bedridden. People were even told they should go live in a nursing home to access services, for example.

Can you give us an example of how this has affected you?

I’m too sick now to go to the local public hospital so the cardiologist will write the script though. I need an ambulance transfer so it takes an entire day to get there, get the script written, and get home. They won’t write the script unless I physically go there, generally, but it takes me more than a month to recover from the trip. It’s not feasible any more to go there just to get a piece of paper written.

I’m not sure what I’m going to do. The doctor finally agreed to write me a 6-month script without going in personally, so I have 6 months to figure out what to do. The most likely outcome though is that I just have to stop taking that medication, even though that makes my disability much worse.

The most frustrating thing though is that this is the second medication that I’ve been in exactly the same situation with. The previous one I had to stop taking about 2 years ago, because that required me to go in to the hospital every month. This system where medications are only subsidised if you physically turn up is profoundly unfair for homebound and bedridden patients, but nobody seems to have any interest in fixing it.

What has your experience of the NDIS been like?

My own personal experience of the NDIS hasn’t been too bad, at least so far. Because I was already a long-term user of the state disability service I got in via the “List C” grandfathering without too much fuss.

I did find that some of the services that are very important to me are ones that NDIS fights hard not to fund. Most importantly is weekly myotherapy. This helps to counteract the bad effects on my body of lying down all the time – because bodies aren’t built to be horizontal all the time there is a lot of pain and other problems and the myotherapy really helps.

As far as I’m concerned this is clearly an NDIS problem – it comes under “maintenance therapy to maintain a level of functioning” and it’s written into the COAG agreements as something NDIS should fund. But NDIS just said “that’s a health system responsibility” and I was specifically forbidden from spending any of my funding on it.

At the time it was my first plan and my anxiety levels were very high and I was just relieved they’d agreed to fund enough support hours that I could keep living in the community, so I have been paying out of pocket for it all this year. I definitely plan to fight about it more in this year’s plan and even appeal if necessary, though it scares me to pieces.

What have you heard about the NDIS from others who are also unable to leave their home or their bed?

Lots of other folk who are told their condition should be managed by the health system, even though there’s nothing further than can be done to treat their conditions and it’s disability supports that they need.

It’s very demoralising to our whole community because there are just so many stories over and over and over of homebound/bedridden people being rejected by NDIS, or occasionally even of people who were accepted into NDIS but are then removed from the scheme on review.

I’ve also heard from a lot of people who just haven’t even been able to apply because either they are overwhelmed by the paperwork requirements and they have no support to apply, or because they know they can’t get the medical evidence required so they can’t apply. If you don’t have a GP and you can’t see any specialists how are you supposed to get medical evidence together?

What do you think could be done to make sure people have access to good healthcare?

Firstly, anybody who’s interested really needs to read the Just Invisible report, because there are a LOT of recommendations in there. But some of the easiest ones that we could implement straight away if there was political willpower include:

Want to know more? The full report is available from the “Just Invisible” Medical Access Issues For Homebound/Bedridden Persons website.