The NDIA has released new and detailed data about how participants and their families are faring under the National Disability Insurance Scheme (NDIS).

For the first time since the scheme began, the NDIA has released blocks of data about participants, their plans and the outcomes they are achieving.

It’s the first time this kind of data has been made available. Up until now the only information available was data provided in the Quarterly Reports given to COAG (Council of Australian Governments) every three months.

While this information was helpful, it was not the sort of data that helped track how the scheme was progressing or what kinds of outcomes participants were getting from their NDIS funding.

The data released yesterday included data collected by the NDIA as well as surveys of people with disability and their families. All the data has been de-identified, so no one will have access to individual details.

People with disability, families and carers, organisations and researchers have been calling on the NDIA to release NDIS data for a long time now. They wanted the information released so everyone had a chance to see clearly how the scheme was progressing.

In his media release Minister Stuart Robert said making data more available will allow the community to keep up to date with the performance of the NDIS, as well as provider markets and participant experiences.

“We will continue to release further data and I am committed to open information sharing which both guides and measures the progress of the NDIS,” he said.

“As demonstrated with today’s release, the data will build a clear and accurate picture of what is working in the NDIS and what challenges we need to overcome to ensure long term outcomes for participants.” 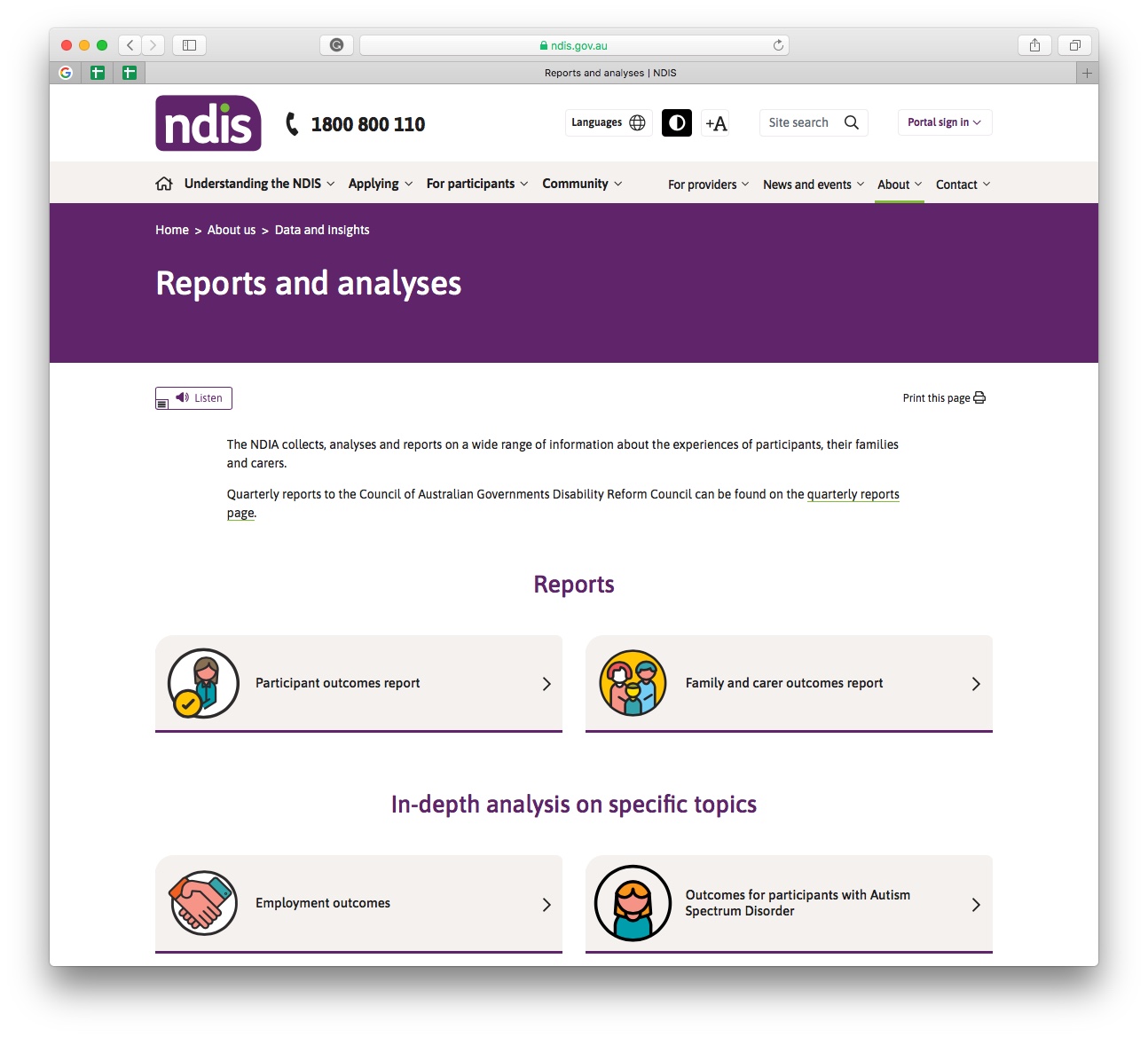 📷 Screenshot of the Reports and analyses section within Data and insights.

But yesterday was just the start. The NDIA also released a timetable explaining what data will be released over the next year. By the end of next year a range of reports, statistics, data packs and interactive visuals will all be available. The first of a set of interactive maps will be available in September.

The NDIA has promised that information will be released about:

Yesterday’s release is a good start – but it is just the beginning.

We noticed that the data did not include as many variables as people had been expecting –noting of course that there are still more releases to come. We think that is important because we need to be able to analyse the data in lots of different ways, particularly focusing on important things like gender and cultural background.

There were also lots of pretty reports – but not as much data in its raw form that researchers could analyse. And given that the reports were written by the NDIA, they also presented things in as positive light as possible. To be expected of course, but something to keep in mind as you wade through all the pretty coloured diagrams and charts.

We are really happy to see the data finally released for a few reasons.

We also need to know how the scheme is progressing overall so we know what areas need more attention and work. For example – if particular groups are getting really poor outcomes what are we going to do about it? We all need that information to hold NDIA and government to account for the decisions they are making about the scheme.

It’s also fair. This scheme belongs to people with disability and their families. It is their data that is being collected. They should have access to it.

The scheme is also being funded by Australian taxpayers. The data should be publicly available so everyone can see how the scheme is tracking.

We are still combing through everything that was released to see what it all means. You check it out for yourself by following the links below. And if you find anything interesting feel free to drop us a line and let us know.

If you want to know more check out the links on the NDIS website: