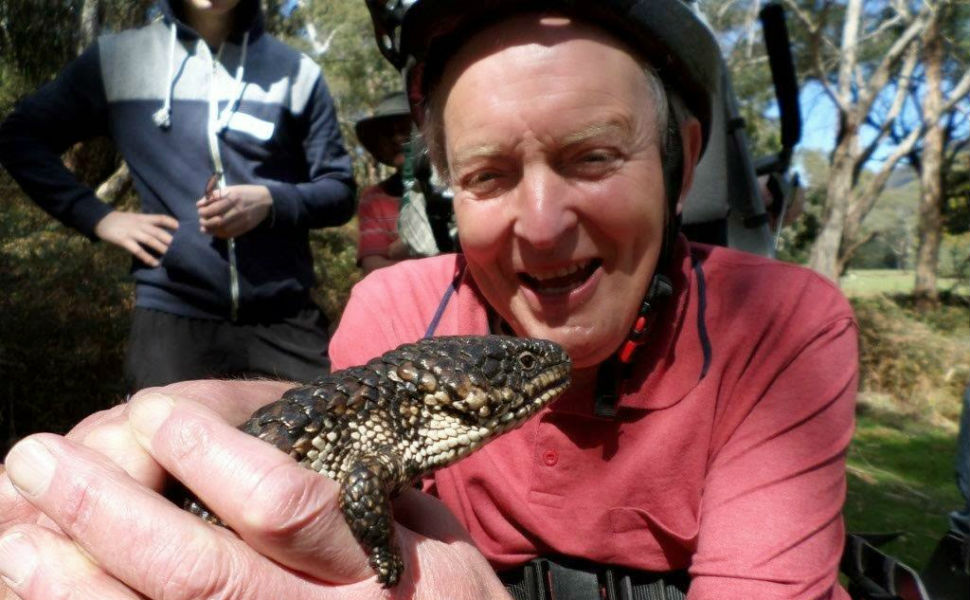 Computer science lecturer David Stratton sits there beaming with a grin so wide you’d swear his face will just about crack in half. He’s on a large flat granite slab atop a peak called Mt Bishop in Victoria’s exquisite Wilsons Promontory National Park.

Not that David was riding any old regular wheelchair. He was sitting in a TrailRider, a beautiful beast which is half wheelchair, half mutant wheelbarrow.

David has multiple sclerosis. Before he was diagnosed in the mid 1990s, he used to be a keen hiker. He really didn’t want to give up that lifestyle, and thanks to a Canadian innovation which has now travelled to Australia – plus several willing friends and helpers – he hasn’t had to.

A Canadian called Sam Sullivan invented the TrailRider in the early 1990s, so he could keep enjoying his outdoorsy lifestyle after he had become a quadriplegic in a skiing accident.

The first prototype looked like an old folding aluminium chair with handles front and rear for the “sherpas” who would push and pull the vehicle. A few modifications and hey presto, the TrailRider was born.

There are currently 16 TrailRiders in Australia. Most of them are in Victoria, thanks largely to a quiet achiever who deserves a big rap – John Kenwright, Community Activation Coordinator at Parks Victoria. David Stratton also deserves praise for helping spread the word.

TrailRiders cost about $7,000 to buy, but anyone can use one for the day for free if they call first.

There’s a list of the available all-terrain wheelchairs (as they’re officially known) available for hire in Victoria right here if you’re interested.

But we live in a fast-paced world where there’s always a new gadget to outperform the one someone just invented. So it is with the TrailRider.

Thanks to some good old-fashioned Aussie innovation, the world’s first motorised TrailRider has arrived. It’s basically just a regular TrailRider with a small wheelbarrow engine added.

This simple modification has turned the humble TrailRider into the equivalent of a monster truck. Well, maybe not quite, but it does mean that less “sherpas” are required.

“I’ve tested the new motorised TrailRider and I can tell you it makes the sherpas’ job that much easier, making it possible to get into even rougher, more remote and beautiful places,” says David Stratton.

There’s a great split-screen video which shows the two types of TrailRider in action on the same bit of track.

There are no plans yet to roll out motorised TrailRiders around Australia. In fact there’s still only one still in existence. But that single motorised beast could be a harbinger of things to come. Before long, and with a little luck, motorised TrailRiders should be making the great outdoors much more accessible to many more Australians with disabilities.

Oh, just make sure you watch out for the local wildlife.

Read even more about TrailRiders here on the TrailRider Tales blog.