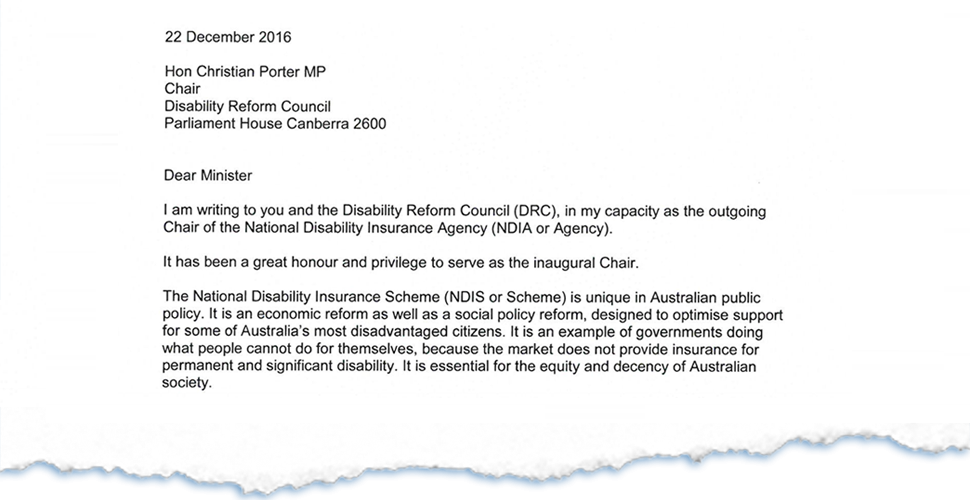 As the new NDIA Board take up their position, a farewell letter from outgoing Chair Bruce Bonyhady AM is a reminder that the NDIS is continuing to transform lives for thousands of people with disability, says Every Australian Counts Campaign Director John Della Bosca.

Mr Bonyhady finished as NDIA Chair in December, after playing a leading role in securing the NDIS to replace a broken, underfunded and fractured state based system, and steering the new NDIA through the trial phases.

In a letter to Social Services Minister, Christian Porter, Mr Bonyhady highlighted the successful NDIS trials and the challenges ahead – “as you would expect from any nation building exercise.”

“The results, in spite of all the challenges, are something that all Australians can be proud of and the NDIS is already being seen to be of international significance,” he wrote.

Every Australian Counts Campaign Director John Della Bosca says as the roll out hits the six month mark, it’s a crucial time to remember why so many Australians campaigned for the NDIS and the vision of people such as Mr Bonyhady.

Not only did the NDIS double the amount of disability funding available, its focus on inclusion and supporting people with disability to participate fully in Australian life is fundamental to the United Nations Convention on the Rights of Persons with Disability.

“The NDIS is about putting the choice and control in the hands of people with disability to choose their own supports and goals,” he says.

“Yes, there have been issues with the roll out itself – most of which is due to the sheer size and scale of the transition and will be ironed out over time.

“There’s also no doubt that the NDIS as it stands is not working perfectly for everyone, and there are issues that need to be addressed in the planning processes in particular.

“It will take time to get right and navigate through such a huge change.

“However the vast majority of people who have made the transition to the NDIS are telling us they’re getting better support than they were before or they’re getting support for the very first time – that’s something the community and governments should not lose sight of.”