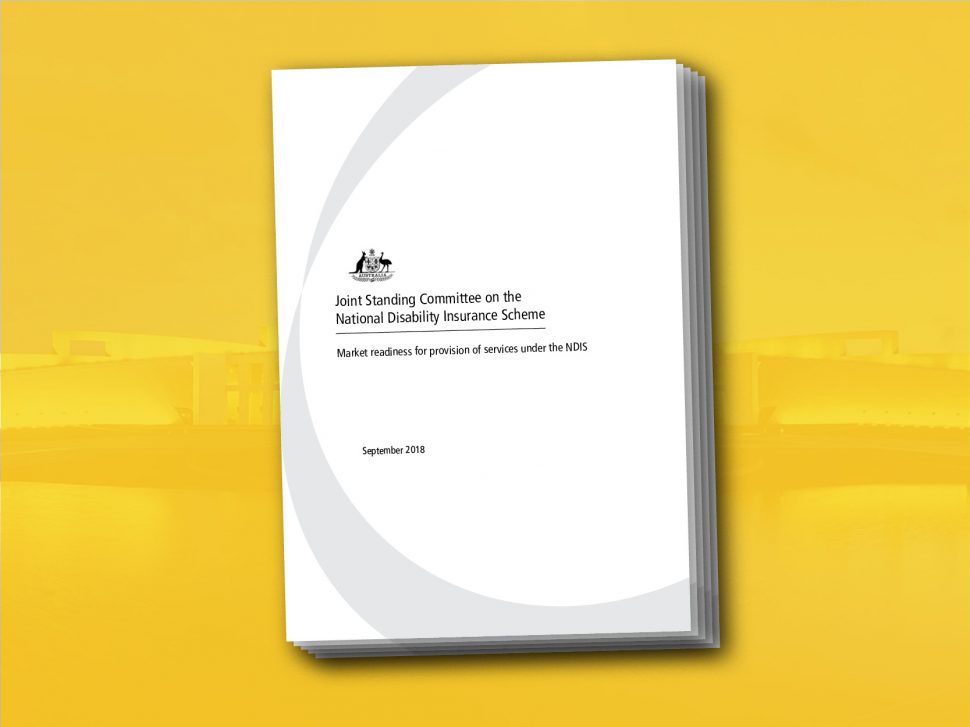 Markets, Markets, Markets. We hear a lot about markets when it comes to the NDIS. But without attention to how markets are operating, the choice and control promised by the NDIS will become meaningless.

The Joint Standing Committee on the NDIS were so concerned about how things were going they recently conducted a separate inquiry into “market readiness for the provision of services under the NDIS”.

While that might seem a bit of a mouthful, the inquiry was a critical look into how easily participants were able to access the supports and services they need. Or not able to, as the case may be.

Today the Joint Standing Committee released its final report – all 124 pages of it, with 29 separate recommendations. You can find a full copy of the report here.

But just in case you have other plans for the weekend, here’s a bit of a summary.

The report starts by acknowledging the enormous task of introducing the NDIS and how hard it has been to move from existing state-based systems to an individualised and market-based system.

But given how big the job is, says the committee, all the more reason to just get on with it.

Five years on, they say, and we have still not sorted out who does what and when. When it comes to the market, roles and responsibilities are still not clear. Their message to governments – get it together and work it out. And fast.

When it comes to participants, the committee agrees with what people with disability, their families and carers and the organisations that support them have been saying for years – there is not enough help for people to get their plans into action. More help is required to ensure people can become informed, active and engaged consumers. In particular, they suggested more people should have access to support coordination.

When it comes to the disability support workforce, the committee notes that despite endless reports and more recommendations than you could ever count, there is still no national strategy to grow the number of people in the workforce. That’s despite the fact that it needs to grow to 70,000 by 2020. That’s less than two years away folks. Same recommendation – get moving.

In a similar way, the committee thinks not enough is being done to grow the market. Existing providers are finding the transition difficult and there are not enough new providers to meet new demand. Same recommendation – get a wriggle on.

Most disturbingly, the committee said that it heard that some providers were “cherry picking” participants and leaving the “most vulnerable” without support. They said not enough was being done to secure providers of last resort to make sure people did not fall between the cracks. This recommendation went beyond “get a move on” – this was now “urgent”.

Specialist Disability Accommodation (SDA) came in for special attention from the committee. They said they had received evidence that the lack of data on demand for SDA, restricted choices in participant living arrangements, the lack of clear and consistent information available to investors and the pricing review cycle were all hampering the development of new SDA dwellings.

Most importantly, they recommended that the NDIA review the SDA pricing structure to “remove the restrictions for participants in their choices of living arrangements”. In plain English – stop telling people where they can live and who they can live with.

The committee also recommended that the NDIA establish a specialised team of planners to fast track the transition of young people living in aged care to appropriate SDA accommodation.

And finally, the committee also made a few important recommendations around pricing.

Therapy prices have come in for a fair bit of attention lately and the committee recommended that the NDIA work with allied health peak bodies and service providers to “co-design a suitable methodology for pricing supports to participants with high and complex needs”.

The committee also endorsed the recommendation of the Productivity Commission last year which said that NDIS prices should be set by an independent umpire, preferably by the new Quality and Safeguards Commission. The committee agreed that while price setting stayed with the NDIA, there was a risk that prices “would be used to offset budget pressures”.  Again in plain English – the NDIA might be tempted to control the total cost of the scheme by keeping prices low. The committee therefore recommended price setting should be transferred to the Quality and Safeguards Commission by 2020.

You can read the full report of the committee here.