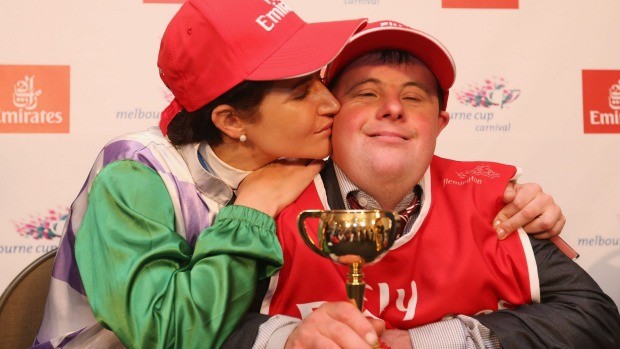 For anyone who may have missed the story of the week, Stevie Payne is the strapper behind the team that beat the odds to take Prince of Penzance to win the Melbourne Cup at one hundred to one.

Stevie has Down Syndrome and yesterday his sister Michelle was the first ever female jockey to win the Melbourne Cup. Plus, the six year-old Prince of Penzance overcame illness and injury to make it to the big race.

It’s a sensational story that has captivated Australia, and the world

Michelle says her brother had challenged some of the stigma associated with Down syndrome.

“I think it’s great for other people with Down syndrome — to see how capable they can be in normal life,” she told the ABC.

“Stevie can pretty much do anything, and look after himself when he’s on his own.”

Ballarat trainer, Darren Weir said Stevie was a true horseman around the stables.

“He can follow the work sheet, he can saddle them up, he can swim them, hose them, and he’s got a great rapport with horses,” he said before the race.

We’ll try to catch up with Stevie over the next few weeks to find out how he’s going after his huge achievement. Stay tuned…..