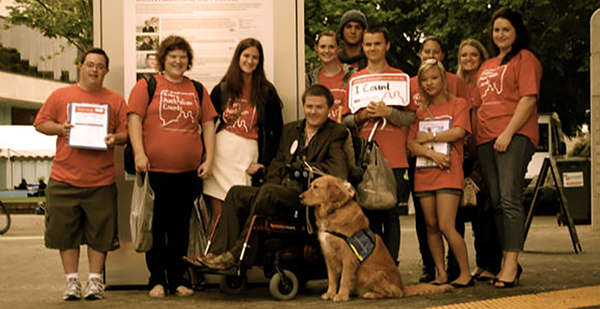 The roll out of the NDIS is just weeks away so we thought it was a good time to celebrate the thousands of Every Australian Counts supporters who campaigned tirelessly for a scheme to give people with disability control of their own lives.

So, in the first of our Friday Flashbacks – we go back five years to re-meet Peter from Mandurah in Western Australia and revisit the beginnings of the Every Australian Counts campaign.

Peter became a quadriplegic after breaking his neck in a swimming accident when he was 16.

Nine years on he was an award winning youth development officer and youth counselor at risk of losing his job because of a lack of funding to enable him to get enough personal care.

Incredibly he would receive almost full time assistance if he resigned and became unemployed.

A self-described larrikin, Peter wanted an NDIS that would support his goals to work and get on with life – a scheme that would reward the positives by making it easier to participate and work if you choose.

“You shouldn’t have to fight to survive and do the things you need to do.”

Do you have a great campaign memory? We’d love to hear it. You can share it by clicking here.