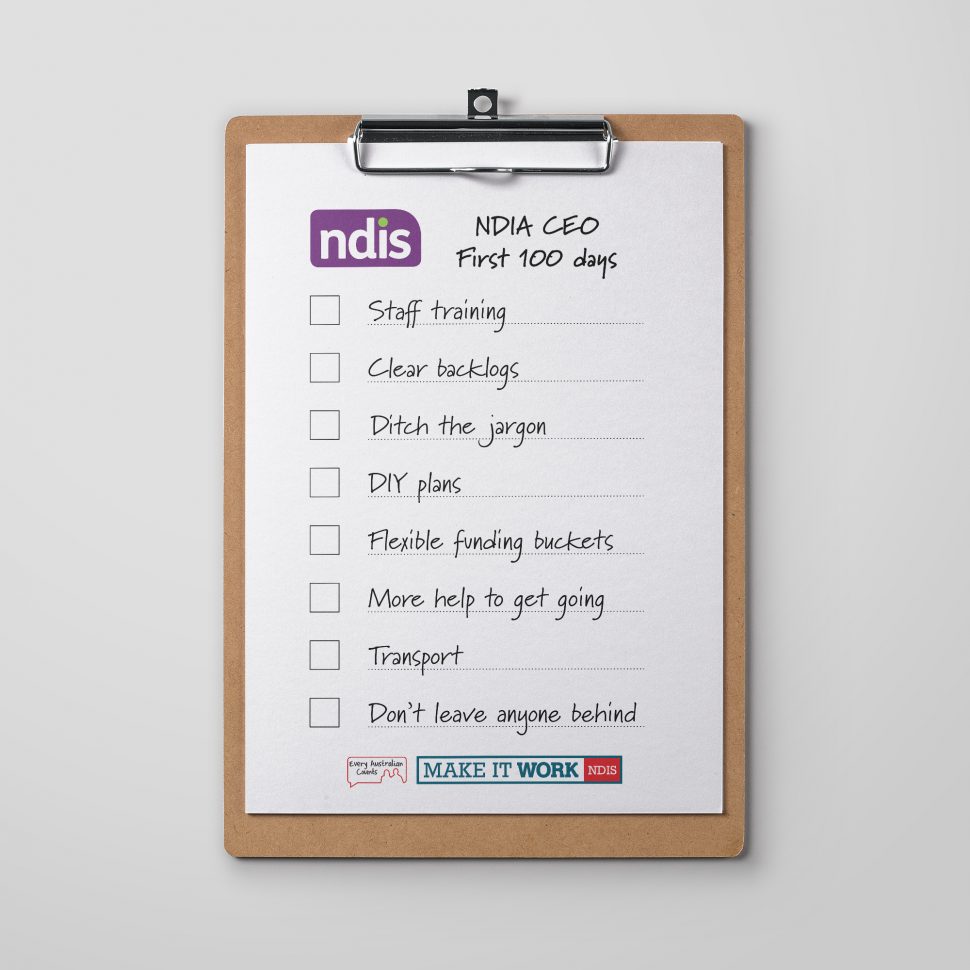 A warm welcome Mr Hoffman to your first day at the NDIA. We hope you have your computer all set up and someone has shown you where the coffee is. You are definitely going to need it – we suspect there may be some long days and nights ahead!

We know you have only just got your feet under the desk but you are about to find out that all the folks working at the NDIA have to do a 100 day plan to guide their work. Everyone here at Every Australian Counts is super keen to work with you to get this amazing scheme working well for everyone who needs it. And just to show how dead keen we are, we have put pen to paper and come up with a few ideas to help you get started on your plan. We have built this to-do list based on feedback from thousands of NDIS participants and their families. People who REALLY want the NDIS to work and are doing everything they can at their end to make that happen.

Feel free to cut and paste!

Training. You’ve been given a few more staff recently (800 or so in fact) – we suspect you may need a few more but it’s a good start. While we don’t want you to build an empire, we do want you to have enough people to get the job done in the way people with disability want and expect. And with new peeps coming on board now is a perfect time to give some serious attention to the way they are trained. We think the focus should be on people with disability and what they need rather than how to use the clunky IT. That would be a great place to start.

Clear the decks. After they have had some training (hopefully conducted by people with disability – we could help you with that) please make sure those staff hot foot it off to areas that will really make a difference to people on the ground – like approving plans, approving equipment and dealing with reviews. There has been some catch up lately but there’s still a way to go.

The NDIS has invented a whole new language of its own – and it’s not that easy to learn. Something we suspect you are about to learn! Again there have been some helpful changes lately but please bin the jargon and focus on telling us things in language everyone can understand.

Draft plans have become the unicorn of the NDIS – a magical mythical creature that everyone wants to see but so far no one has. We hear they are on their way but anything you could do to make them materialise sooner rather than later would be awesome. In fact please don’t stop there – we think it would be brilliant to build plans with whoever we trust and then just submit them to you for approval. And even though your computers appear a tad inflexible they do apparently have this ability.

It’s beyond frustrating to have money left in one part of your plan only to run out in another and have zero ability to move things around. While we know you are new, we promise you this was never the way the NDIS was intended to work. Greater flexibility will cut down stress, cut down reviews and save everyone heaps of time and money. Win, win, win.

6. More help to get going

Give people more help. At every stage of the NDIS – before entering, during planning and getting plans off the page and into action. Making processes simpler and easier would also help – but on its own it is not enough. People really need more support – and this includes families. Less money on consultants and a greater investment in giving people a hand. Doing so will pay off in spades.

Not much point in having funding to do things if you can’t get there. This one’s been a schmozzle for a while now. We know you won’t be able to fix it straight away but please get the wheels turning (all puns intended).

8. Don’t leave anyone behind

Focus on the people who are really missing out. We are all really worried that the only people who appear to be making this thing work are people who are well educated, well resourced, have families to help them, or even advocates. Even with all these advantages, people still struggle. We want this scheme to work for everyone who needs it – but especially those who have more on their plate. There are some awesome groups out there who could give you a few pointers about how to better meet the needs of people who are complex or come from non-English speaking background or who are from an Aboriginal or Torres Strait Islander background. Please get on to them and listen.

That’s more than enough to get you going. We know it’s probably not possible to knock off everything on this list in 100 days but that’s OK – all the more important to get things underway?

And if you need any more ideas, we’ve got plenty. We really want to work with you to get this stuff sorted out – in fact we really want to get in, roll our sleeves up and help you. As you are about to find out, this is an amazing scheme when it works. We want it to work for everyone.

Just give us a call.