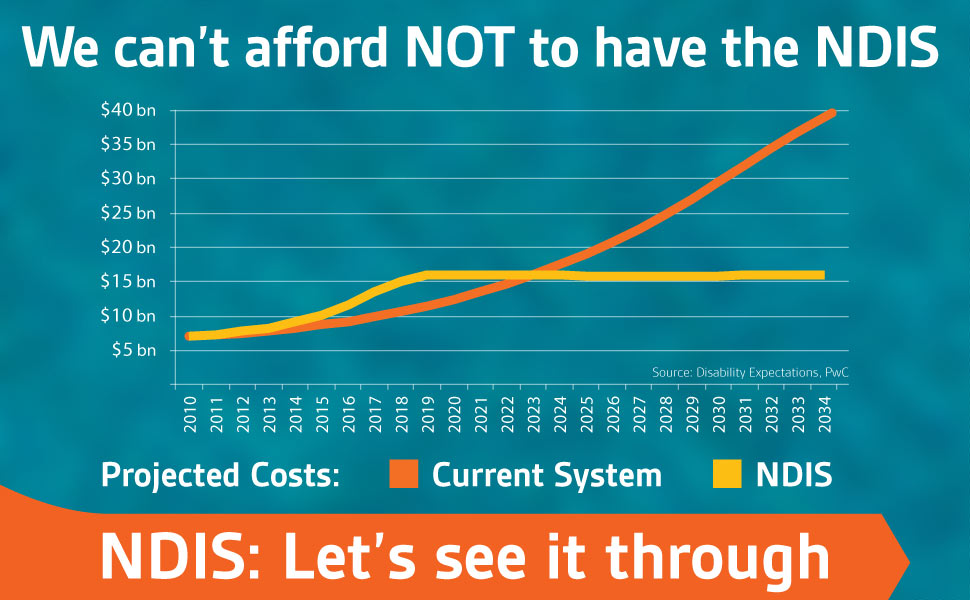 Recently there have been some murmurings in the media, questioning the cost of the NDIS and where Australia will find the money to pay for it. Yet what is often missed in the budget debate is the cost to Australia of NOT introducing the NDIS.

In 2011, the world’s largest professional services firm, PwC got brought together a team of experts to look at the NDIS.

They calculated future budget implications of the current disability system and compared them to that under an NDIS.

The difference is substantial.

The PwC expert group estimated that by 2035, the current disability system would have cost governments and the Australian taxpayer $35 billion a year. That’s to fund a system the Productivity Commission called ‘inequitable, underfunded, fragmented and inefficient, and gives people with a disability little choice.’

Yet under the NDIS, a scheme which promises to provide real support to almost double the number of people with disability, would cost the taxpayer between $15 and $20 billion a year by 2035.

That’s billions of dollars in savings which future governments could put towards other critical services like health, transport and education.

There are lots of reasons for this massive difference. Currently the bureaucracy eats up a lot of the funding while under the NDIS, where individuals drive their own support, administration cost will be hugely reduced. Another reason, according to the Productivity Commission, is that the NDIS is expected to reduce pressure on hospitals, saving a lazy $84million a year, and save another $300million keeping people with psychiatric and other disability out of the justice system.

The NDIS will also mean improved early intervention for many people with disability, lowering the impacts and potential costs of disability support over the longer term. And it will allow thousands of people with disability and their carers the ability to get into the workforce, contributing to the economy, paying taxes and reducing the need for income support. In fact estimates are that the NDIS will increase the GDP by up to $22billion once it is fully operational.

The arguments for the NDIS are compelling. It won’t just transform the lives of hundreds of thousands of people and provide choice, dignity and control for the fist time, but over the long term also reduce costs to the Australian tax payer and add a significant amount to our GDP.

The facts are clear – the cost of doing nothing is great. We simply can’t afford NOT to have the NDIS.