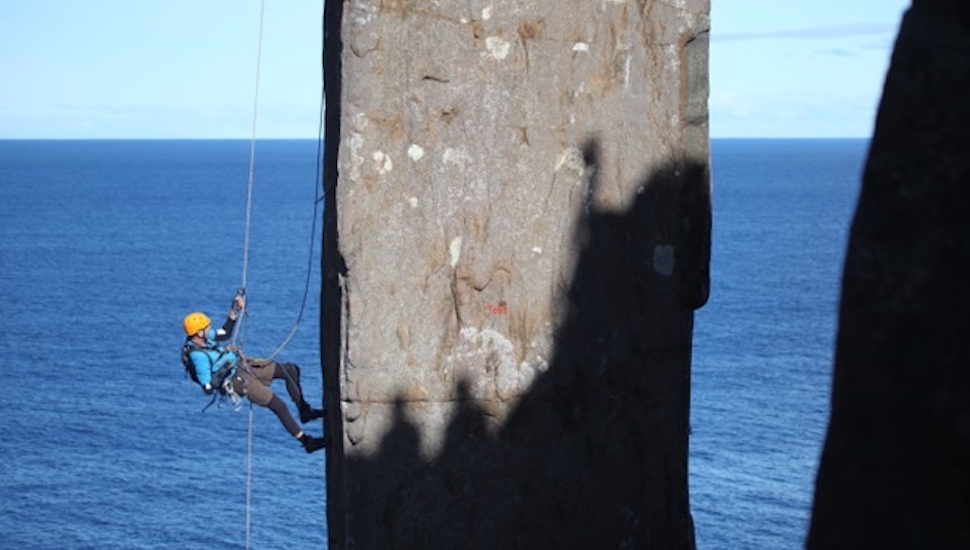 Paul Pritchard is a world famous free climber and an award-winning writer, inspiring adventurers worldwide. But in 1998 his fate took a turn.

Whilst attempting to scale Tasmania’s Totem Pole – a pillar of solid rock jutting out between cliffs on the ocean – a rock the size of a computer monitor fell on his head, leaving him with brain injuries, and paralysis on his right side. Paul nearly lost his life.

“I was on a ledge for ten hours and I was drifting in and out of consciousness – I knew that I’d done something really awful to myself and I aware when the rescue was going on,” he told Every Australian Counts.

Thanks to the bravery of his then girlfriend, who spent three hours hauling him up the remote rock pillar by hand, then hiking to help, and the paramedic who climbed to save him and lower him to a boat – he managed to get out alive.

“When I first came round I was quite upbeat. And glad to be alive, but after a year in various hospitals and rehabilitation centres I got very depressed. I realised that I would never go back to the life I had before. I was incredibly active. I was a really fit young climber.”

When Paul first woke up, after five days in an induced come, he wasn’t able to speak. What followed was years of rehabilitation. Paul, once a daring extreme sports athlete, now had to learn to talk and walk again.

“I guess I kind of slapped myself around the face over a couple of months and said this isn’t going to do. And slowly but surely, I went from walking 300ms around the rehab centre, to walking up a hill in my village in Wales, to 7 years later walking up Kilimanjaro, then 11 years after the accident I went on my first lead rock climb in Italy.”

Paul maintains, that the accident hasn’t stopped him from living, but it has changed his life.

Tasmania’s projectABLE team has five people with various disabilities; including people with head injury, people with intellectual disability, people with cerebral palsy, someone with bipolar. They run three-hour workshops in high schools with students in years 8-12, talking about their lives to try to normalise disability.

The program aims to focus on people’s difference, not their ‘disability’ – “Its not all about overcoming hardship, its just telling our stories.”

“I can see at the beginning when we turn up there’s quite a lot of nervousness with the students and by the end of 3 hours they’re sort of shaking your hand. Its really quite heartening.”

The other feature of projectABLE is to promote work in the disabilities sector, in preparation of the thousands of new jobs coming online with the NDIS by 2020.

“We’re trying to get people interested in jobs in the disabilities sector which I guess are traditionally unfashionable.”

18 years later, on the anniversary of the accident, Paul went back to climb the Totem pole. Unlike before his disability he wasn’t able to use his hands and feet, but still climbed it the only way he could, hauling himself up by rope.

Paul says the most important thing about projectABLE is overcoming the general public’s view of disability, as being focused around overcoming hardship. He says it does disabled people a disservice. He sees disability as just being different, and points out that all people of varying ability use whatever tools and strengths they have, to live as they would like to.

“Its my personal belief that you’ve only got one life. You’ve got to just go for. Just work with whatever you can.”