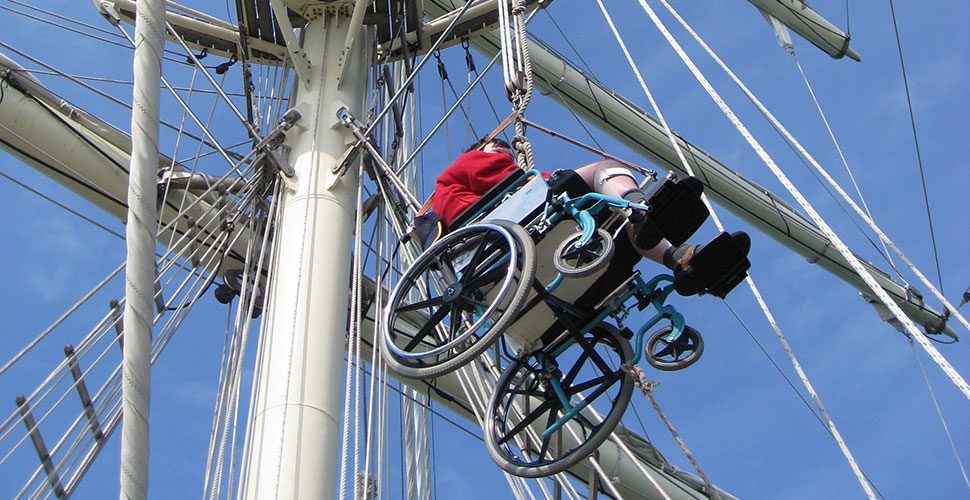 Have you ever dreamed of sailing on a tall ship? With the NDIS supporting people to realise their goals, organisations are coming on board to make it happen – even if they’re as adventurous as taking part in a sailing voyage.

Jubilee Sailing Trust Australia is a not-for-profit organisation that makes sailing voyages accessible to every Australian.

NDIS participants with a sense of adventure and a love of teamwork could consider including support for a sailing voyage, such as those offered by Jubilee Sailing Trust, in the Social and Community participation areas of their NDIS plan.

The NDIS does not pay outright for activities like voyaging with the Trust, but they may provide the supports needed if someone wanted to do this. JST are currently applying to become a NDIS registered service provider which may allow their services to become part of a person’s plan in the future.

Trust Project Manager, Peter Mitchell, said the Trust’s tall ships have been built so that they are accessible to everyone.

“Everyone is encouraged to get involved in all aspects of sailing the ship,” Peter says.

“Everyone onboard is part of the working crew of the ship and has a role to play commensurate with their capabilities rather than due to their disability.”

The Trust has operated for 38 years out of the UK and is now in Australia.

Check out their video here.

“The ship is fully accessible to all. For example, the platforms up the mast are wheelchair accessible and there are ribs along the deck and raised shapes on handrails so that people who are vision impaired know where they are on the ship. There is a speaking compass so those who are blind can heal the ship,” Peter says.

Crew members who have a disability ‘buddy up’ with those who don’t and work together to support one another throughout the voyage.

“We use the adventure of tall ship sailing to unlock human potential and break down barriers between people of different circumstances – especially between people with physical disability and those without,” Peter says.

The Trust has been accredited by the UN Convention on the Rights of People With Disabilities.

Crew members have the option of bringing along a carer and voyages are open to aspiring sailors aged 16 years and older. The Trust’s oldest active sailor was 94.

With the NDIS giving people with disability choice and flexibility with the supports they need to live the lives they choose , more and more organisations will be getting on board. The options and possibilities are up to you; choose your own adventure!