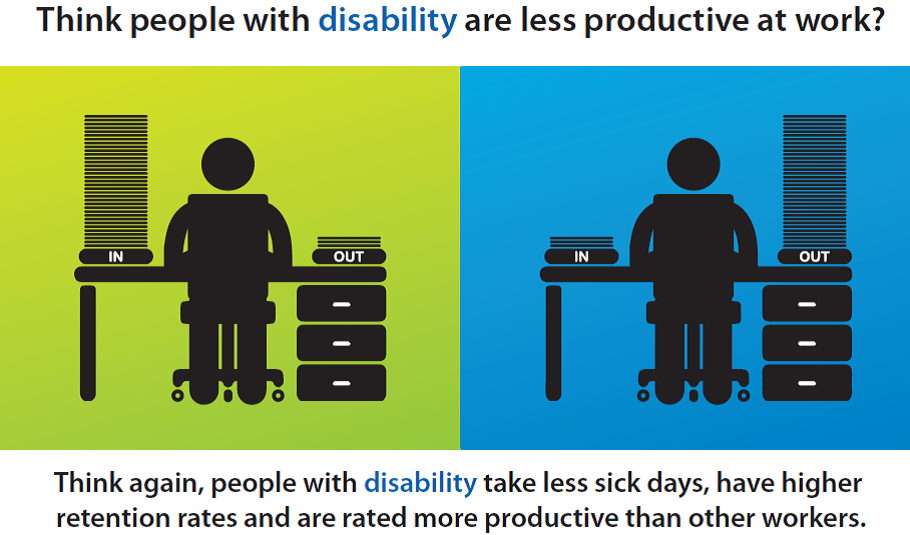 Disability employment does seem to be firmly on the national agenda, with both the Human Rights Commission and the Federal Government looking into how we can get more people with disability that want to work, into jobs. The Commission has also just produced a new guide to help employers understand their obligations under the Disability Discrimination Act.

The majority of complaints received by the Human Rights Commission involve Australian workplaces.

As a result the Commission has made working with business a priority and has produced The Good Practice, Good Business,  a one stop shop for employers. It’s a resource that includes fact sheets and guides for employers about how to avoid discrimination in their work place.

It’s newest fact sheet, Disability Discrimination, highlights how people with disability can be discriminated against by colleagues and bosses – and what to look out for.

That includes obvious physical examples, such as inaccessible ramps  or not allowing assistance animals into the workplace, and the less visible, such as workplace bullying, marginalisation and discrimination during recruitment.

NSW Disability Council Chair and Director at Price Waterhouse Coopers, Cain Beckett says ramps and doors are a small part of the problem, and the easiest to fix.

It’s a hurdle faced by generations of women in the workforce that is being overcome – slowly. Cain Beckett says Australia should approach disability discrimination at work the same way.

“It’s about attitudes. It’s not as much about ramps and doors as people think. Ramps are important, but that’s just what gets you in the front door. It’s what’s happening once you’re in the door that’s important,” he said.

“We do a lot of talking to the disability sector, but that’s preaching to the converted. We need to get to every body else. We need to show them that we are equally capable and to get more of us out there in people’s faces– that’s what will change community culture.”

Changing community culture is also vital if we are to meet Government and NDIS goals of increasing the number of people with disability in the workplace.

Australia is behind the rest of the world

Australia ranks 21 out of 27 Organisation for Economic Co-operation & Development (OECD) countries for employing people with disability.

It ranks 24th our of 27 OECD countries for employing people with disabilities in Government and public service jobs – a dismal 2.9% o of the Australian Public Service in 2012.

And Australia comes last out of all OECD countries for the percentage of the population with disability living below the poverty line.

As well the inherent fairness of giving people with disability the same life choices and financial opportunities as everyone else, it’s also a matter of economics.

The more people Australia has in the workforce, the bigger returns to its economy – more people earning, means more people spending, and fewer people being forced to rely entirely on Government financial support.

Economic modelling shows that if we raised the bar to an average OECD level of disability employment it would add $32 billion a year to Australia’s Gross Domestic Product (GDP) – and pay for the NDIS. There is no reason why a prosperous country such as Australia should be performing worse than almost every other country, including Mexico.

“We think we’re pretty good so we don’t have to try harder but really we are a long way behind the rest of the world,” Cain said.

“There are 4.5 million people in Australia with disability and rising. One in four people who are now under 20 will have some form of disability before they die.

“Australia as a nation cannot afford to have such a large cohort of people out of work.”

According to Cain, the Government’s commitment to fund and roll out the National Disability Insurance Scheme (NDIS) is a big step forward in improving workforce participation rates for people with disability.

It will allow people with disability to choose the supports they need to get the job they want. It will help them adjust their support and training needs as their career progresses.

Perhaps most importantly, by supporting people with disability to work in mainstream jobs and enjoy mainstream services like everyone else, it will break down barriers to discrimination and promote inclusion in every part of life.

The Government’s commitment to have a new Disability Employment Framework in place next year – one that works for both employers and people with disability – is also good news.  You can read more from Disability Minister Mitch Fifield about the new disability model.

Cain is optimistic it can be done, pointing to Germany, where companies with more than 20 employees must make sure at least 5 per cent of its workforce has a significant disability.

The more companies fall short of that target, the more they are taxed – with the revenue going straight back into disability employment programs.

The system is supported by a framework of measures, such as free transport to work, additional leave and government funding of necessary physical adjustments if they are too big for the company to reasonably pay for itself.

Germany’s system may not be perfect, but Cain’s point is that there is no one size fits all approach and Australia must come up with a system that suits us.

“There are many ways to skin it if we put our heads together and think beyond what we’re doing already.”

In the meantime, to help the thousands of Australians with disability who want jobs but can’t find them, former Disability Commissioner, Graeme Innes, put together these 10 top tips to getting a job.