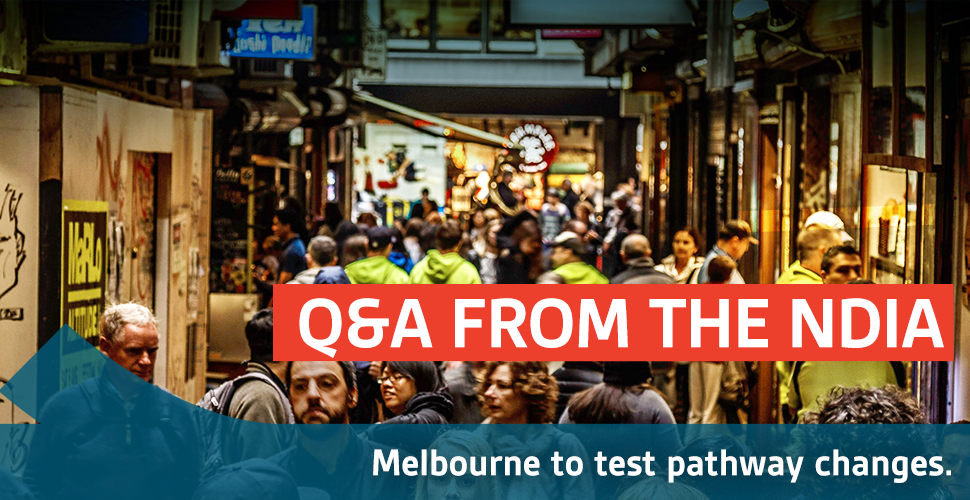 You may remember last month the National Disability Insurance Agency announced that they were making some changes to the NDIS planning process.

You can read that story about making changes to the NDIS planning process here.

The best bit – no more phone plans! All NDIS plans will now be developed face to face.

The NDIA also said they would be making some other changes – but did not say where or when.

Today they announced the test sites – changes to the planning process will start in mid December in the north eastern and eastern suburbs of Melbourne.

The changes will be made to what is called the “participant pathway”. In simple terms, that is the journey a person goes on as they enter the scheme, are found eligible for help, and start the planning process.

So what will be different?

• All NDIS participants will be given a single point of contact as they move through scheme. For most people, this will be a Local Area Coordinator.
• Joint meetings will be held with the participant, the planner and the Local Area Coordinator.
• The NDIS plans have been redesigned to make it easier for people to see what their goals are, and what support they need to achieve them.
• People will be able to look at their plan as it is being developed and will be able to ask questions if things aren’t clear.

If the test goes well in Melbourne, then these changes will be rolled out around the rest of country next year.

But for those of you who don’t live in Melbourne there is still some good news.

The NDIA also announced that it will now be quicker and easier to make small changes to a plan. And participants will also be able to give service providers access to the information in their plan – but only if they want to.

This announcement today is good news for Every Australian Counts supporters – it means your feedback is making a difference.

That is exactly what has been announced today. It shows what a difference we can make when we make our voice heard.

P.S. When the NDIA made the announcement back in October, we sent through some questions on your behalf. They sent back some answers today. We’ve included them below.

Q&A from the NDIA

The new pathway is going to be piloted before being rolled out nationally.

The initial pilot of the new NDIS participant pathway will commence from mid-December. The pilot will initially be conducted in Victoria North and Victoria East in partnership with two established Local Area Coordination (LAC) partners, Brotherhood of St Laurence and Latrobe Community Health Services.
It is important to note that this is only the first step and other features of the pathway will be tested in other states or territories.

How long will the pilot run? When will you start rolling out around the rest of Australia?
The initial pilot is expected to be completed by the end of April 2018. Features of the new pathway will be tested and improved features will be rolled out nationally as soon as possible after that.

I already have a planning meeting booked. Will the changes apply to this meeting? Do I need to prepare anything extra? Is there extra material I need to bring to the meeting?
Participants who have planning meetings already booked will go ahead as scheduled. There is no additional preparation required for these meetings.

I am already an NDIS participant. I have a plan, my supports are all organised and I use the portal. Will there be any changes for me?
Participants with an existing plan and supports are unlikely to see changes to processes as part of the initial pilot, however they may notice a range of improvements to the portal.

Portal improvements to be included in the initial pilot include:
• Accelerated reviews for minor changes to a participant’s plan
• Providing participants with the option to allow their providers to view their plan in the portal so providers can better understand their goals and tailor services accordingly. Participants will receive further information closer to the date when this feature becomes available.

Please note that existing plan review arrangements continue during the pilot. This means that if a participant has had a change in circumstance, or where the safety or wellbeing of the participant is at risk, then a request for review explaining that change can be submitted.

This feature will be tested before being rolled out nationally.

The NDIA will continue to communicate with participants, providers and peak disability groups to keep them up to date.

Participants and members of the public can still contact the NDIA on 1800 800 110 if they have any general queries.

It’s great that plans will now be done face to face. But there are other parts of the scheme that are still really confusing and difficult to navigate. Will you be making any other changes to make things a bit easier for participants?
We’ll be putting particular emphasis on participants receiving consistent, easy-to-navigate information in their preferred format.

Some of the key features that will be initially piloted include:
• Pairing participants with a consistent point of contact based on an individual’s needs – in most cases, this will be a LAC.
• A re-designed plan to make it easier for participants to see how their goals have been recorded and linked to community, other government services and funded supports
• Face-to-face planning meetings with a LAC, the participant and an NDIA planner to finalise their NDIS plan
• Participants being able to see a working version of their plan as it is being developed and having the opportunity to ask questions and provide feedback during the planning meeting, to allow for any queries to be discussed and addressed before the plan is finalised.

These changes will be piloted progressively because it is important to take the time to get the new pathway and its rollout right.