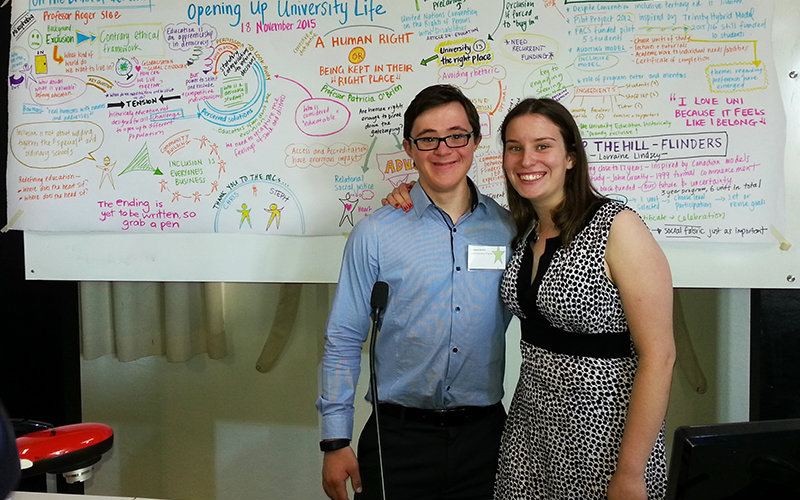 A program at Sydney University is giving young people with intellectual disabilities the opportunity to experience life as a uni student.

The Uni 2 Beyond program supports students with disability to study on campus, matching them with both an academic and a social mentor.

They don’t get a degree at the end of the program, but they do get the chance to study courses of their choosing and participate in all aspects of campus life.

Professor Patricia O’Brien from the University of Sydney’s Centre for Disability Studies told Every Australian Counts that the students and their families report increased confidence, independence and self-esteem after participating in the program.

Participants say they feel like “every other student” and are able to see “that they have a future ahead of them that is no longer separated from other students their same age.”

Mentors support participants by helping them to join university clubs, having lunch or coffee together and other social activities outside the university, such as meeting their mentors’ parents and going to parties.

“Many have formed great friendships that have lasted beyond the semester. One of our alumni for example participated in a State netball competition, where she was cheered on by her two uni mentors, who have now become her friends,” says Professor O’Brien.

It’s not all easy for program participants. Some face challenges getting to and from the uni, or finding their way around big campus grounds or navigating an environment of high expectations. Adjusting to life after the program can also be difficult.

Professor O’Brien says that having to navigate these challenges contributes to much of the success of the program.

“The experience can be challenging for both the students and the families, and it is the job of the Uni 2 Beyond team to support them to succeed.”

The idea behind the program came from the Canadian provinces of Alberta and British Columbia, where the government financially supports full inclusion initiatives in all higher education facilities.

Professor O’Brien says that so far only two Australian universities provide opportunities for people with intellectual disability, with a similar program operating at Flinders University in Adelaide.

However, she hopes that other higher education providers follow suit and open their doors to people with intellectual disability.

So far, the program at Sydney University has supported 32 people since it began in 2012 and the initiative is ongoing.

People with intellectual disability who have a passion for learning and want to contribute to all aspects of university life – social and academic – are now being considered for 2017.

You can read more about Uni 2 Beyond program via the Centre for Disability Studies at Sydney University.