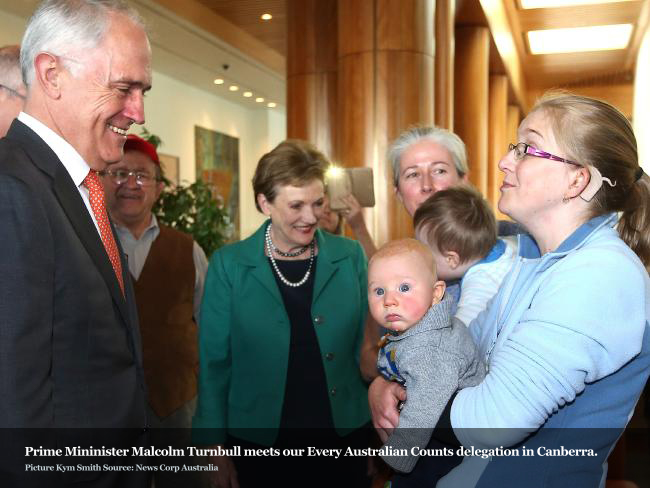 Treasurer Scott Morrison has announced he will today introduce legislation into Parliament to lock-in full funding for the NDIS, saying he’s confident of securing support from the Senate cross bench.

It means your emails are working!

In news last night, the Treasurer told Fairfax media he was confident the cross bench would support the government’s proposal to lock in funding for the NDIS through a 0.5% increase in the Medicare Levy.

The government needs cross bench support in the Senate to push the levy increase through – because the Opposition don’t support the legislation in its current form.

However, at a doorstop in Canberra this morning he told reporters:

“I would like to see that bipartisanship for disabled Australians be re-established in this Parliament so we can get on from the debate about the funding of the NDIS and move on to the even more important debate about the delivery of the National Disability Insurance Scheme.

There is the opportunity for the Parliament to do that. We have been working constructively with the cross bench but I would not want there to be a suggestion that any arrangement or agreement has been reached. That is not the case. But we are in constructive discussions and will continue to be engaging with people in the Parliament in good faith who want to do the right thing by Australians with disabilities.”

It’s still unclear where the support will come from. The Nick Xenophon team and the Greens say they are still undecided.

Senator Derryn Hinch is on board with the proposal.

Independent Senator Jacquie Lambie described the NDIS as the “most wonderful thing” but is concerned that the threshold for singles of $21,000 a year is too low. She also believes the Opposition’s proposal to start the levy for people earning $87,000 a year is too high.

“I think we can find some middle ground here,” she told ABC AM.

And Pauline Hanson’s One Nation, which has four cross bench Senators, is still in discussion with the Government.

The introduction of the bill in a package of 10 means it is unlikely there will be time for substantial debate over the levy – so we will have to wait until the next sitting week in early September at the earliest, before the reforms are debated and put to a vote.

This means we need to keep up the pressure on the cross bench to secure full funding for the NDIS ASAP.

Already more than 1,500 Every Australian Counts supporters have emailed the cross bench asking them to help break the deadlock and remind them why their vote counts.

If you haven’t sent a message, you can send an email here.

We want the full funding issue sorted now, so we can get on with making the NDIS the best it can be.

Coalition tips Medicare Levy to get over the line